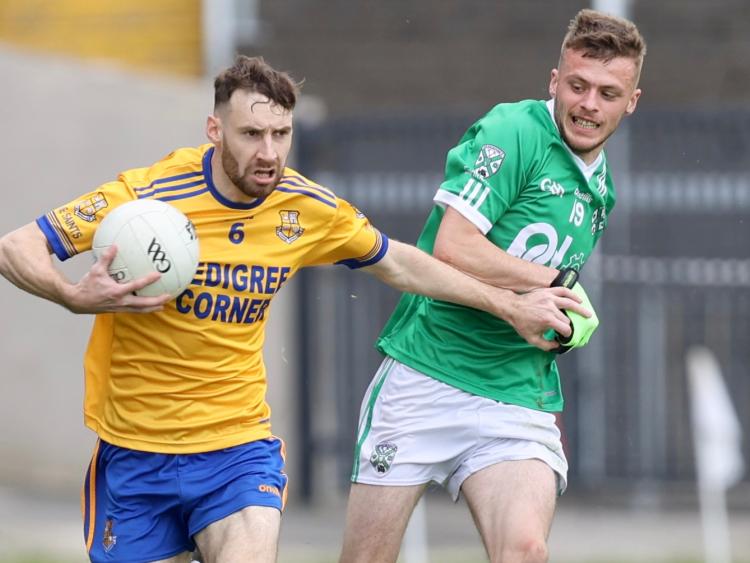 Action from St Joseph's and Stradbally in Round 2 of the Laois SFC. Photo: Alf Harvey

St Joseph’s are through to Round 3 of the Laois SFC with a narrow one-point win over Stradbally in a well-contested and hard-fought battle at MW Hire O’Moore Park this afternoon.

Stradbally battled back to level with ten minutes of injury-time remaining and closed it to the minimum in the seventh minute of injury-time, but St Joseph's deservedly held out for the win and to progress to the next round.

Stradbally got off the mark direct from the throw-in when former League of Ireland player, Gary Comerford, eyed the uprights and slotted over from range with thirty seconds on the clock.

St Joseph’s wasted no time in wiping the slate clean with Josh O’Brien winning and converting a free himself, but Stradbally edged back into an early lead with Tom Sheil dissecting the posts after hard graft to create the chance.

St Joseph’s began to pull the strings around the centre of the park and reaped the rewards with the next four scores going their way. O’Brien sent over his second of the day inside five minutes and more followed from Jason Campion and Josh Lacey extending their lead before O’Brien clipped over a free.

With the first of the water breaks looming, Stradbally rallied with Comerford slotting a close-in free and then Stradbally had a strong shout from a penalty.

Podge Fitzpatrick mishit shot into the sqaure was claimed by Tom Shiel with his bag to goal, he turned and was dragged as he got a shot away which St Joseph’s goalkeeper Aaron Cooney gladly turned away to leave the margin at two points at the water break.

St Joseph’s pushed their lead out to three shortly after the restart through Jason Campion after Dylan Doyle’s effort bounced back off the upright, but Stradbally bit back with a quick brace of frees from Comerford to leave the minimum between the sides.

St Joseph’s finished the half on a high with Doyle doubling their advantage with a mark, and then a quickly taken mark from Josh O’Brien sent Brian Daly through where he shrugged off his marked and sidestepped the goalkeeper before slotting home to send them in with a five point lead at the interval - 1-7 to 0-5.

Comerford and Seamus Farrelly traded points on the resumption before Stradbally shaved the deficit to a goal thanks to points from Podge Fitzpatrick (2) and Ciaran O’Neill with 20 minutes left to play.

O’Brien kicked his fourth point of the day for the Kellyville side, his third free, but Stradbally responded with Comerford and O’Neill closing the gap to two points heading into the final water break.

St Joseph’s kicked on with Brian Daly finishing off a patient team move that was closely followed by a sweetly struck ‘45 from James Kelly to send them into the final minutes with a nervous two point cushion.

St Joseph’s were reduced to 14-men in injury-time when Lir McDonald was dismissed for an off-the-ball incident with Tom Shiel. Substitute Colm Kelly ensured a nervy finish with a close-in free, but Stradbally couldn’t bridge the gap as St Joseph’s held out.