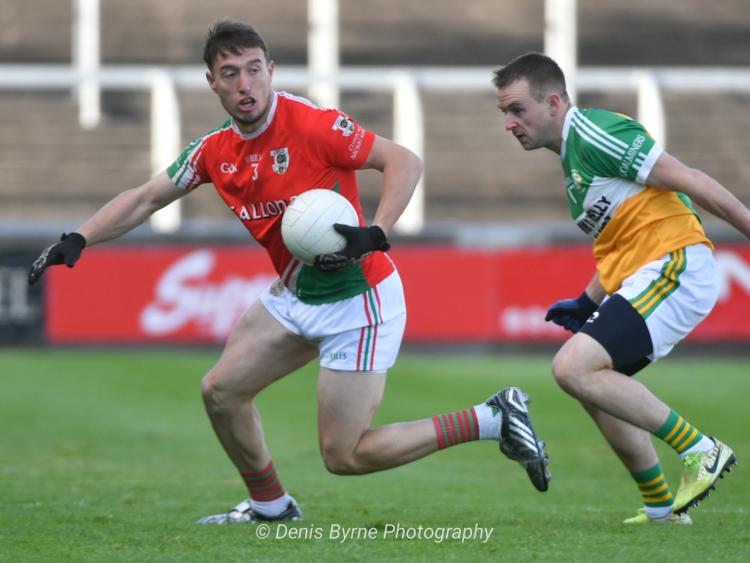 Clonaslee were crowned the Laois Intermediate champions this evening at MW Hire O'Moore Park following a hugely entertaining clash with Crettyard that went right down to the final whistle.

Pitting last year's beaten finalists, Clonaslee, against the side who came down from Senior, Crettyard, in this finale was always going to be an entertaining clash and it certainly didn't disappoint as

Both were the pre-Championship favourites to get to this stage with Crettyard looking to make a swift return to the top tier, while Clonaslee were hoping for better luck this time around after a narrow two point loss to neighbours Rosenallis after a thriller in last year's decider.

This game had a bit of everything and when Crettyard scored their goal five minutes into the second half, the tempo stepped up a gear and in the end it went right down to the wire.

Despite plying into the wind in the opening half, Clonaslee posted the first score to the board a minute in when the industrious John Rigney provided the finish to ease them into an early lead. Crettyard weren't slacking and worked the ball to their target man, Evan O'Carroll, inside to wipe the slate clean.

Clonaslee set up with Jack Owens sitting back as a sweeper in front of O'Carroll and his able marker for the day in Willie Young, making life difficult for one of the county's top forwards.

Clonaslee edged back into the lead through a short-range Niall Corbett free after he drew the foul himself with some neat build-up play on the way. Eight minutes in and they were looking for the first green flag of day when a tidy pass found Sean Condon on the edge of the square but Patrick O'Reilly got back to block his effort and clear the danger.

A dink pass from Corbett released Liam Senior on the terrace side and he pivoted before cracking over a superb score under pressure. Two minutes later, and after a bit of debate about where the free should be taken from, Niall Corbet launched over a mighty 50m effort and let out a roar the second t left his boot.

Crettyard almost had a goal right before the water break only for the timely last-gasp interception from John Rigney just as Lee Salter was squaring to the awaiting Brian Brennan. The ball was cleared and the sides went into the water break with Clonaslee leading 0-4 to 0-1.

Pa Brennan found the target for Crettyard after a few wayward wides from both sides, but then the first goal of the day arrived when a pop-pass from Ger Dunne allowed Liam Senior to stretch his legs before finding Corbett, who cut inside and released a low shot into the back of the net.

Crettyard, to their credit, responded well and rattled off two points in as many minutes Cormac Murphy settled them after the goal with a booming score from range, and then O'Carroll shook the attentions of Young to narrow the gap back to a goal approaching half-time.

Clonaslee had the final say of the half, however, with Corbett setting off on a powerful run before dissecting the uprights to send his side in with a four point lead - 1-5 to 0-4.

As he did in the opening half, John Rigney was on hand to slot over the first of the second and increase the Clonaslee lead further. Undeterred, Crettyard rattled the Clonaslee net a minute later to spark them back into life. O'Carroll's went high into the air and after a fumble for possession, Lee Salter pounced and caught it perfectly on the half-volley.

The deficit was down to the minimum 39 minutes in when Crettyard worked the ball to the right man and O'Carroll made no mistake with the finish to make it a one-point game.

Clonaslee regrouped on got back on track with a Corbett free from a tricky angle. Crettyard kept coming and, despite losing Patrick O'Reilly to a second yellow card for hauling down Bob Downey on his way to goal, Pa Brennan grabbed his second of the day before the referee called for the final water break with just a point separating them.

Clonaslee compounded their lead on the restart with the next three points going their way through Downey, Ger Dunne and Mark McEvoy. Crettyard bit back with an O'Carroll brace of frees, but the margin was quickly back to three when Corbett struck for another from an acute angle.

Two minutes from time Crettyard had it back to two through Lee Salter's booming effort, but Corbett was on hand with his sixth of the day to reinstate the Clonaslee advantage.

Heading into the first of four minutes of additional time, Clonaslee lost full-back Willie Young to a black card and Crettyard finished a well-worked move with a Ciaran Hosey point. Bob Downey swung over the last score of the day with 62 minutes of the clock, and though Crettyard threw the kitchen sink at them in search of an equalising goal that led to a frantic finish and a red card for Conor McEvoy, Clonaslee held on for a sweet victory.