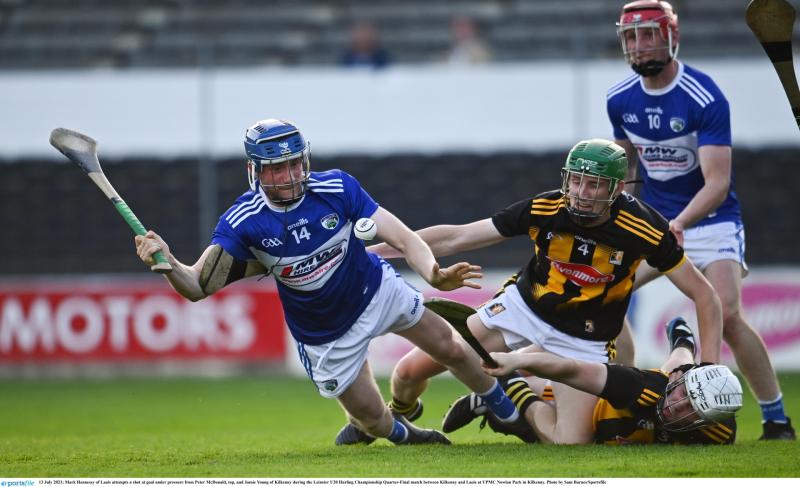 Mark Hennessy of Laois attempts a shot at goal in Nowlan Park. Photo by Sam Barnes/Sportsfile

Ollie Hally's Laois U-20 hurlers travelled to Nowlan Park and pushed the overwhelming favourites right through to the final whistle in a hugely entertaining spectacle this evening, as Kilkenny advanced with three points to spare.

Despite Eoin Guilfoyle forcing a save from Lorcan Fitzpatrick inside the opening 30 seconds of play, Laois pegged the first score of the day directly after with Tadhg Cuddy applying the finish. Two minutes later, Kilkenny didn't have to wait long to get their goal as goalkeeper Aidan Tallis' long ball forward sent Conor Kelly through to lift the green flag with four minutes played.

Laois replied admirably with a Thep Fitzpatrick free and though Kilkenny would fire the next two on the hop through Guilfoyle and Liam Moore, Laois would go on to hit two of their own with marksman James Duggan and Ciaran Byrne finding their range to narrow the gap to the minimum at the ten minute mark.

Guilfoyle doubled the home side's before Laois set about dismantling the deficit with Cuddy converting a '65 and Ciaran Byrne his second, before James Duggan pulled off a sensational piece of skill send the ball between his legs, round his marker and dissect the posts from an acute angle to give Laois a narrow lead. 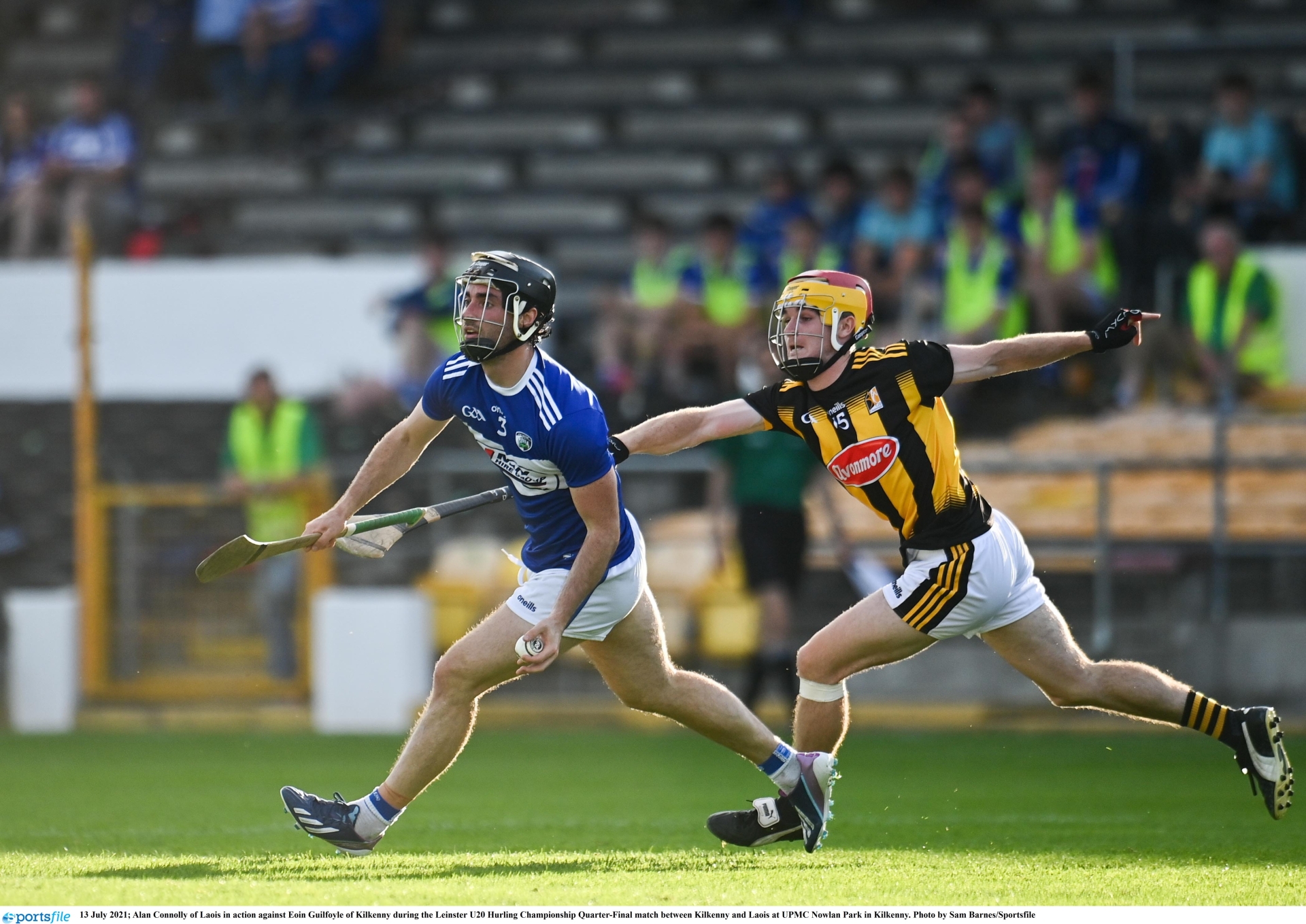 Kilkenny got back on level terms through Ciaran Brennan right before the water break but Laois went in with their noses in front thanks to a Cuddy free.

Guilyfoyle levelled things up on the restart before two in a row from Cian Kenny ensured Derek Lyng's men edged ahead before Laois closed out the half on a high with Duggan and Cuddy pointing to send them in with a much-deserved one-point lead. 0-11 to 1-7.

This gutsy Laois side carried their form into the closing half and didn't drop off in the second half, matching the eventual winners toe-to-toe right through to the final whistle.

Guilfoyle restarted the game with a brace of frees to take the lead, but Laois got back level through Gearoid Lynch and then retook the lead with another beauty from James Duggan.

Kilkenny began to pull the strings around the middle third and rattled off three more before Fitzpatrick drew Laois level with fifteen minutes to go. Still, Kilkenny found enough time to edge ahead with Padraic Moylan's first right on the stroke of the final water break.

Laois emerged and went straight down the middle of the field with Mossy Keyes calling Tallis into action to make the save. Kilkenny began to stretch their legs and rattled off five unanswered points to give them a commanding position with just over five minutes of time remaining.

Full-forward Mark Hennessy was fouled in the square and substitute Dan Delaney expertly dispatched the penalty to give Laois a late lifeline. However, a Guilfoyle point was followed by a straight red card for Tadhg Cuddy as Laois went down to 14-men.

Try as they would, this spirited Laois side couldn't bridge the gap as Kilkenny march on to the Leinster semi-final. TEAMS AND SCORERS BELOW PIC. 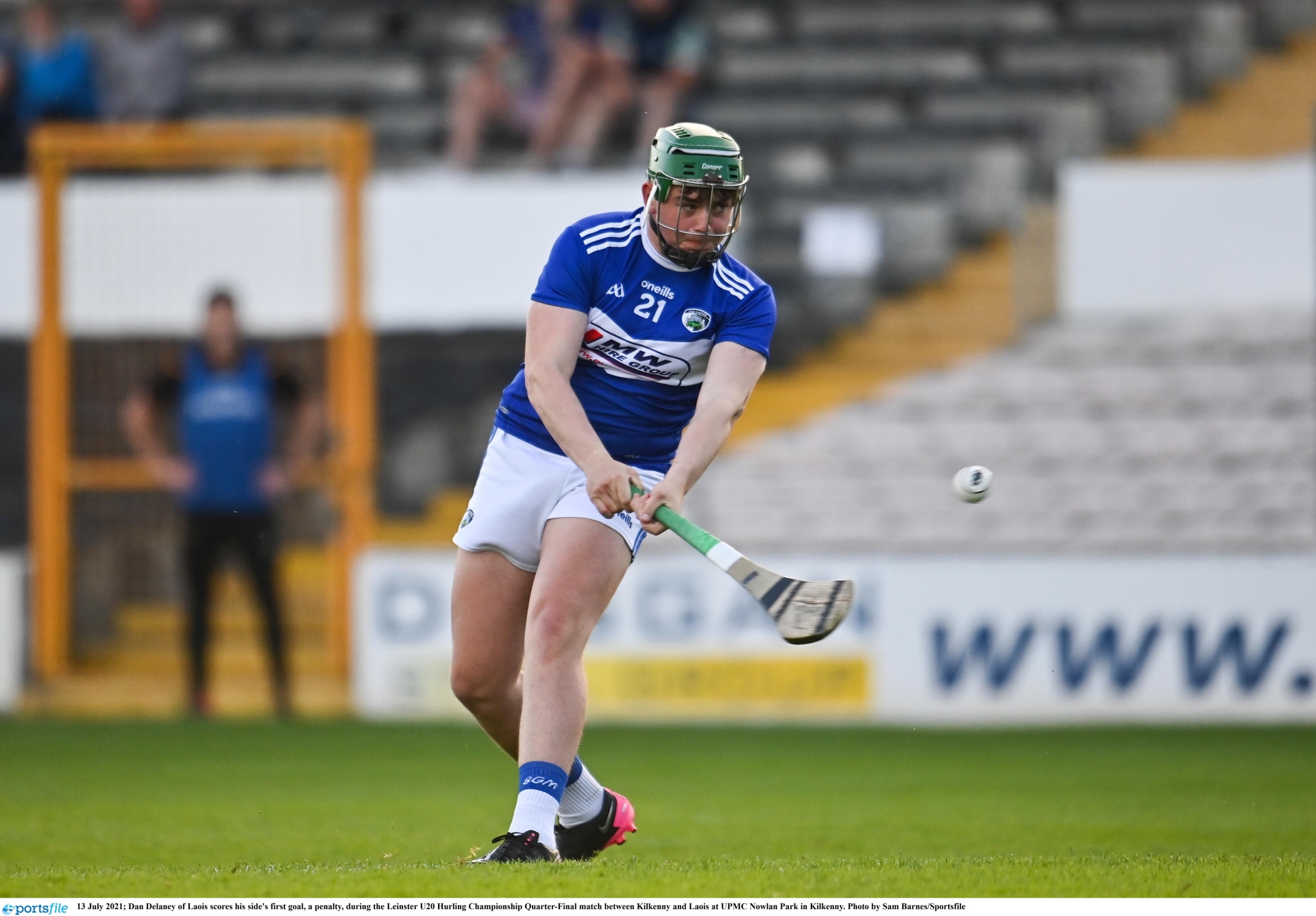