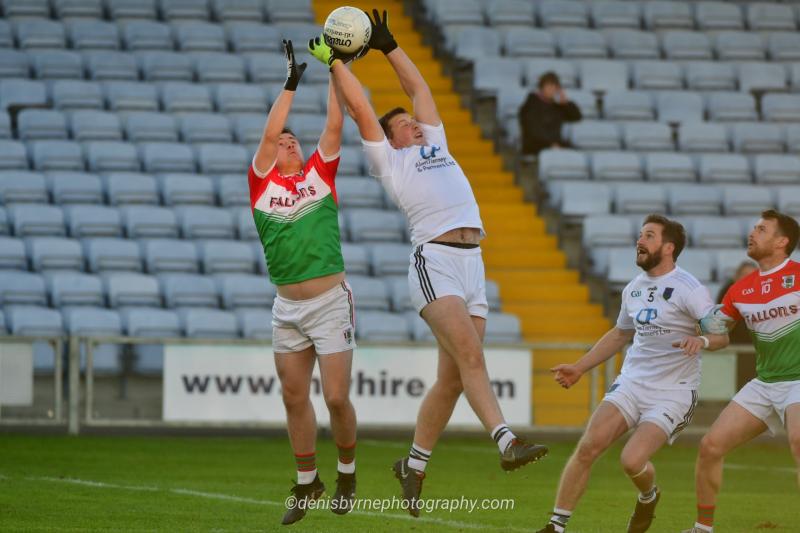 Courtwood looked on their way to winning the match in normal time thanks to their clinical nature in front of goals. Niall Dunne scored two, while Luke Doran got the other, as they led by seven with fifteen minutes remaining.

Clonaslee had missed their fair share of goal chances in the first half, and that looked like it would cost them. However, Ger 'Buster' Dunne stepped up to the plate to score a goal in the last ten minutes to get them back into it, and then Dunne was fouled for a penalty minutes later which Bob Downey converted to give Clonaslee the lead.

Courtwood's Danny Luttrell kept his composure from frees though to make sure there needed to be extra-time, and a goal from Sean O'Flynn in the first half of that was the crucial score that sent Courtwood through.

Clonaslee St Manman's, who had nine goal chances the last day against Ballylinan, had another right from the off here. Bob Downey's shot was high and short, but full-forward James McRedmond did brilliantly to gather it in. McRedmond's attempt was well saved by Courtwood keeper Matthew Byron in goals.

Niall Corbet kicked the opening score from a 45', and then a minute later Corbet added a free as Clonaslee continued to pressure Courtwood's kick-out,

When Courtwood keeper Matthew Byron did break the press from his kick-out and find Robert Tyrell in midfield, it yielded their first score. Tyrell went on a powerful run down the field and split the posts.

Byron, who made a fantastic save earlier, made his way up the field to slot over a 45' and level proceedings. Byron was forced back into action in his goals soon after, as he pulled off a stunning save from Bob Downey to deny him a goal. Paddy Hyland placed over a point from the rebound though for Clonaslee.

Clonaslee continued to be the better team for the rest of the quarter, as their intensity in the tackle was on another level to Courtwood's. Their forward play let them down a little bit though, and Niall Dunne swung over the equaliser.

Cian Doyle then went on a bursting run that took him right through the heart of the Clonaslee defence, and fired one between the crossbar to give Courtwood the lead.

Clonaslee continued to kick wides before the first water break, as Courtwood held a 0-4 to 0-3 lead at this stage. Eddie Kinsella's side needed to improve in the second quarter though if they wanted to remain ahead.

They did exactly that as well, with a goal straight after the water break ended. Courtwood full-back Mark O'Halloran did excellently to intercept a Clonaslee pass and O'Halloran wasted no time in finding Luke Doran. He played a brilliant ball to Alan Kinsella, who rounded his man with a nice turn of pace and Kinsella found Niall Dunne for an easy finish.

Clonaslee did reply through a Corbet free, before they tried for another goal chance. Liam Senior saw Corbet close to the square, but his handpass was just slightly short and Courtwood cleared the danger.

Corbet landed another point from a free, this time from a longer distance, as Clonaslee were within two of their opponents.

Niall Donoher landed Courtwood's first point of the half to restore the lead back to three, as the veteran forward went on one of his famous jinking runs before splitting the uprights. Danny Luttrell landed a free as well for Courtwood, before Corbet kicked another free to leave Clonaslee trailing by a goal at half-time.

Clonaslee made a substitution at half-time as they brought on Niall Hogan, and it paid dividends straight away. Hogan curled over a beauty with his first touch, and then Corbet scored two on the trot to leave the scores level.

However, all that hard work from Clonaslee was undone in the space of a minute by Courtwood. Niall Dunne buried his second goal of the game with a low finish, and then Dunne a minute later did superbly to dispossess DJ Callaghan and feed Luke Doran for a tap in.

Courtwood were playing with confidence now after those two quick-fire goals. Robert Tyrell spotted Paul O'Flynn in an acre of space and passed to him, with O'Flynn firing one over the bar from close-range.

Courtwood could have had another goal in the 41st minute, as Cian Doyle fed Danny Luttrell at pace, but Luttrell's blasting effort came back off the bar.

Bob Downey responded for Clonaslee, as he managed to squeeze over a score from a tight angle. Paddy Hyland then curled over a lovely outside of the boot effort, and Clonaslee had reduced the deficit back to five again, 0-10 to 3-7.

Clonaslee had another goal opportunity upon the resumption of play. This time it was substitute Cian Barrett who had a shot on target, but Byron proved equal to the effort once more.

Corbet and Luttrell swapped frees, before Corbet kicked another free to leave four betwen them. And Clonaslee finally found the back of the net in the 52nd minute to leave the minimum between them.

Centre-back Ger Dunne took it upon himself to round his defender and fire a blasting shot in off the crossbar, as Byron was finally beaten,

Two minutes later, and the Clonaslee men had a second goal and they were ahead. John Rigney and Niall Hogan were involved in a move that sent that man, Ger 'Buster' Dunne, through on goals. Dunne was dragged back just as he was about to pull the trigger, and Bob Downey dispatched the penalty.

However, just when you thought Clonaslee had completed the epic comeback, back came Courtwood. Luttrell stepped up two slot over two frees under the most extreme pressure, and this one was headed to extra-time.

Both sides kicked wides at the start of extra-time, as tired bodies took to the field and a lot of slow possession football was played. Niall Dunne landed the first score five minutes into extra-time after good work from Sean O'Flynn.

Corbet got Clonaslee on the scoreboard thanks to a close range free, but Courtwood fired back with their fourth goal of the game. Sean O'Flynn was one of the few players on the pitch still capable of running at pace, as he buried a goal into the bottom right.

Clonaslee kicked a few wides before half-time of extra-time, and went in a goal down. However, substitute Ryan Kilroe contributed with a score after the interval, but that waa swiftly wiped out by an Alan Kinsella effort down the other end.

John Rigney left two between them once more, as Clonaslee's patient possession paid off with the wing-back slotting over. Kinsella replied again for Courtwood, as he kicked a point from a free, then one from play.

Clonaslee's Niall Hogan landed his second point of the match, but that was the last score Clonaslee could manage as they fell to a heartbreaking defeat.