Personal agendas must be put aside says challenging report 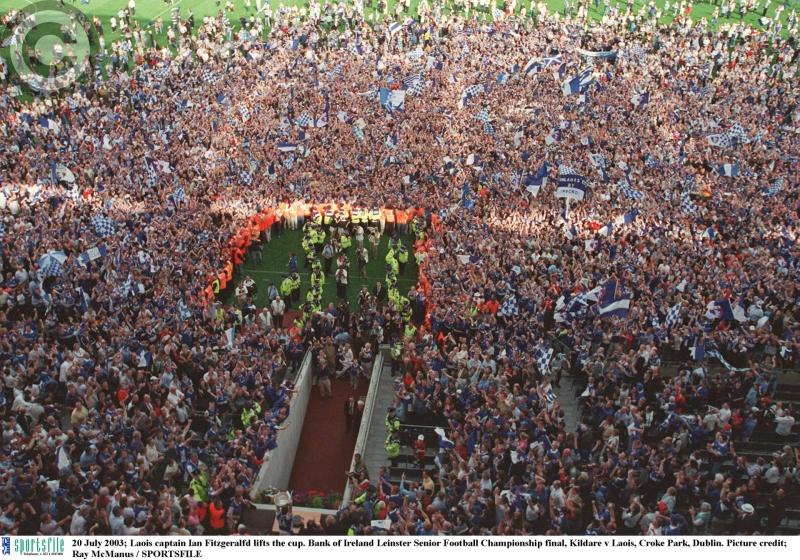 Sea of blue on Croke Park in 2003 when Laois won Leinster. Copyright Sportsfile.

New club competition structures and a range of new actions are proposed in a new review of Laois Gaelic Football published by Laois GAA which says 'personal agendas' must be put aside to tackle 'apathy' which is hitting the sport and the county's potential.

Completed in the summer the Laois Gaelic Football Review Group briefing is a relatively short but to the point roadmap to revive the county's football fortunes.

The report says the Laois GAA Management Committee considered it 'prudent and necessary' to assemble a review group to brief it on what steps, if any, the Management Committee should take to enhance the position of Laois Football in an increasingly competitive landscape.

The group included Ger Slevin, Fergal Byron, Michael Dempsey, Chris Conway, and Niall Collins. The introduction to their finish product cuts to the chase about where things are at.

"Laois Football faces many challenges in an increasingly competitive environment, partly due to a lack of a shared vision,
coherency, systems, standards, and planning at many different levels. Our teams are under achieving and our county championships are not as competitive as they should be.

"We find it difficult to recruit quality coaches for our clubs, schools, and development squads. This scenario, along with the challenges of the pandemic, has led to apathy and an environment which makes it difficult to achieve success. In short, Laois Football requires greater leadership, direction, and support in order to optimise our potential and to achieve success," the say.

The report says the review group consulted widely and came up with the following recommendations.

5. Competition structures and game programmes at all levels should be reviewed and discussed as a matter of priority.
6. A fully functioning project management team should be created.
7. The project management team, with others, should complete an audit of coaching and games in all football clubs.
8. Laois GAA Management Committee to set up subcommittee for commercial opportunities for Laois GAA.
9. Mentoring should continue to be provided to all underage club coaches in line with the Leinster Turas initiative.
10. A significant ‘red flag’ was raised in relation to numbers playing in certain age groups in urban areas.
11. Centre of Excellance High Performance gym should get more technical equipment to help raise current S&C standards.

The Review Group also gave some initial consideration to how the football season could best be as they put it 'tweaked'.

The following emerged.
• February-March: Regional competition (for individual clubs) comprised of 3/4 regions; The recommendation is that teams be exposed to at least 3 games each with silverware at the end of it.
• March-early July: League with eight (8) teams in each division and a minimum of ten (10) games for each team.
• End of July/First week in August-September: Championship with 8-12 teams and a minimum of three (3) games for each team.
• October-November: Divisional team competition, with the potential for all clubs to play at a higher level. Consideration to be given to the county champions entering the competition at the knockout stages. Further, the under 19/20 championship would take place in or around the same time and there should be no need for players at that grade to play in the divisional competition. Divisional teams should have an ample number of players without the need to call on the younger players (the Review Group considers that players should focus on their own age grade first – see, further, below).
• December-January: No competitions.

The committee also wants Laois GAA to work on the county brand which involves looking outside the county for support.

The group concluded with a rallying but challenging message.

"We, as a group, believe that this document should be the start of an overall strategy change in relation to football within the county. As a county, we must transform apathy into interest, commitment, excitement and reignite the passion within our supporter base and in all stakeholders.

"There are challenges, but within these challenges lies opportunity. Our stakeholders are asking for change, but this can only take place if a significant number of people engage and put personal agendas aside for the common good, which is Laois GAA," the say.

The group say the review was conducted over a short timeframe so they suggest that the recommended project management
committee take up the mantle and use the document for further analysis which would involve the clubs and other stakeholders.

They say that the review and report will serve to stimulate and inform debate and the look forward to taking part and to helping in other ways, if appropriate.

The report was presented to Laois GAA Management Committee in August.