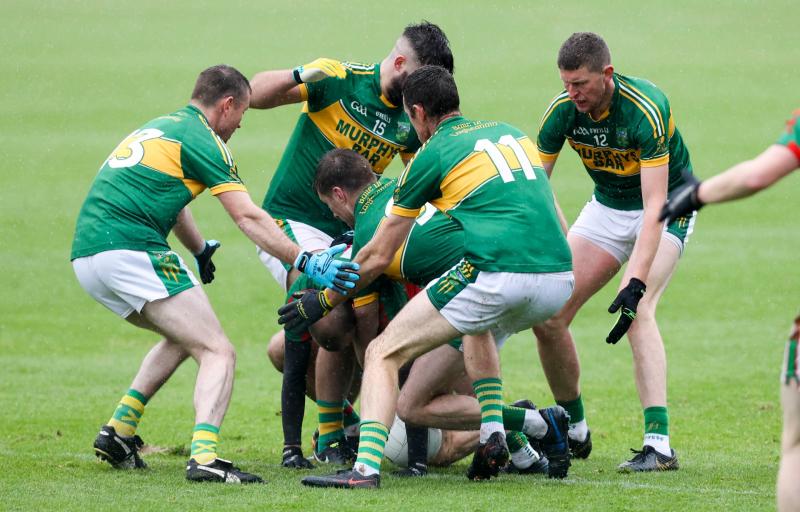 Normally, relegation finals can be cagey and tight affairs due to what's at stake. However, this clash between Ballylinan and The Heath proved to be anything but that, as we got unbelievable points, goals, and a dramatic finish.

Ballylinan looked to be on their way to safety with five minutes to go, as they led by three. However, The Heath's Robbie Ging palmed in a goal to leave the game back in the balance for the last few minutes.

Gary Walsh, who had been carrying an injury into this one and struggled to move at times, was to be the match winner for Mick Lillis' men. Walsh, who bagged a goal earlier, scored a stunning last-minute point to make sure his side stayed up, and The Heath fell to relegation from Senior ranks for the first time ever.

The Heath started the better in this relegation decider and settled their nerves swiftly. James Phelan landed a beautiful score with the outside of his right boot to get The Heath up and running, and then Robbie Ging kicked over another point.

Cathail Dunne, who has probably been Ballylinan's best player throughout the championship, curled over a lovely score under pressure to get his side up and running. The Heath responded with two more points though, as Conor Booth slotted over two frees.

Jamie Farrell hit back for Ballylinan with a nice score, but the same man would be black carded minutes later. Dylan Kavanagh showed a serious turn of speed to race past a few challenges, before Jamie Farrell dragged him back and referee Michael Tarpey was left with no choice but to show him black.

Conor Booth added a third free for The Heath before the water break to leave them 0-5 to 0-2 ahead after fifteen minutes of action.

The Heath didn't really capitalise for the first five minutes upon the resumption, as they hit a couple of wides along with one short into Ballylinan goalkeeper Tom Wright's hands. Ballylinan did well during this period, as Cathal Fennessy fired over a score for them after he played a lovely give and go with Cathail Dunne, and seconds later Jamie Farrell returned to the field.

However, despite Ballylinan being back to fifteen men, it was The Heath who hit the next two scores. Jimmy Nerney came up from centre-back to fire one over, before the impressive Robbie Ging landed his second.

Ballylinan full-forward Gary Walsh had not touched the ball in the first twenty-three minutes, as he could not run due to his injury. However, after a breaking ball fell to him near the square, Walsh did not hesitate to lash it into the back of the net with a terrific finish.

The Heath recovered well to that setback though. Conor Booth popped another free between the posts, and while Larry Kealy replied for Ballylinan with a point, Conor Booth kept his composure to tag on another free.

James Phelan then grabbed his second after a nice piece of fielding from Liam Kinsella in the middle of the park. Ballylinan did manage to grab the last score of the half though, as Gary Walsh's 45' came up short, but Robbie Donoher quickly caught and offloaded it to Alan Farrell, and he fired over.

Ballylinan began the second half brightly and were quickly level on the scoreboard. Ciaran Fennessy scored a sublime point on the run from wing-back, and then Alan Farrell also landed a lovely effort after strong running from deep.

Full-forward Daithi Carroll kicked his first score to put The Heath back ahead, but a Walsh free was followed by Ballylinan's second goal of the game. Walsh's long-range effort came off the crossbar, and Kevin Byrne, who had run all the way up from corner-back, found himself in the unfamiliar situation of being in front of goals. Byrne didn't look panicked though, as he dispatched to the net.

The Heath replied well with James Phelan and Brian Ging kicking scores fro them, but Walsh pointed a crucial free for Ballylinan just before the second water break to give them a 2-9 to 0-13 advantage.

The Heath seemed to be struggling up top at the start of the fourth quarter, as perhaps the nerves of a relegation game began to seep in. Ballylinan almost got in for a goal, but The Heath's goalkeeper Joe Walshe pulled off a worldie of a save to tip over Cathal Fennessy's rasping effort.

Ballylinan kept tagging on scores though, with Larry Keally landing another after more good running from wing-back Ciaran Fennessy. The Heath got their first score of the final quarter through a Conor Booth free, but Cathail Dunne responded for Ballylinan with an superb score.

The Heath refused to give up though, and after Conor Booth tapped over another free, they grabbed a dramatic goal. The Heath substitute Mark Phelan spotted Robbie Ging free in the square, and handpassed to him. Ging did excellently to palm past Tom Wright, and we were level once more in O'Moore Park.

Walsh calmed Ballylinan down by tapping over a close-range free, but Booth responded to kick the equaliser under pressure in stoppage time from a placed ball as well.

However, cometh the hour, cometh the man. Ballylinan quickly counter-attacked on The Heath, and Jamie Farrell found Walsh's run. Walsh had only one thing on his mind, as he landed a sensational score off his left boot to ensure Ballylinan's survival and The Heath's relegation to Intermediate ranks.