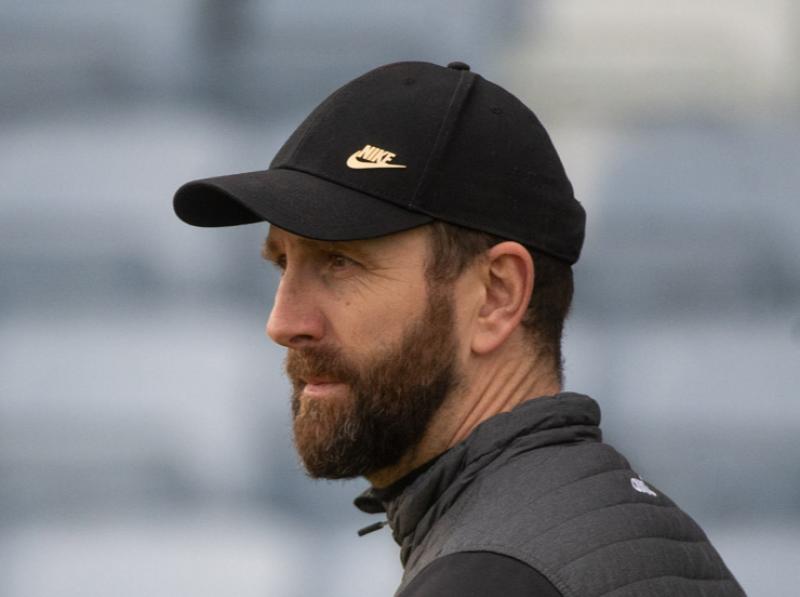 Kevin Fitzpatrick is a Portlaoise legend. He has seen it all and was a focal point of the massive success they have had down through the years.

Now he is looking to help them add another senior football championship but this time from the sideline as a manager.

“I think it’s my 20th final to be involved with the team so you know how to relax during the week and I am just trying to get it across to the lads who are in their first final and starting out really. I have been there, done that so it’s just to get them focused coming into the final.

“Our experienced lads have been in maybe 15 finals some of them and the younger lads coming into the team this year have been brilliant. We started eight lads (for the first time) in senior championship this year and they really hadn’t won coming all the way up through underage, so this is a big step up for them, so we just don’t want them to get carried away. It’s still another game you know it’s a county final but just trying to treat it as every other game you go into really.”

Things didn't start out to well for them in 2021 with an opening round defeat to Courtwood while they stuttered over both Ballyfin and O'Dempsey's along the way too.

“Fair play to Courtwood, they did a job on us that night, but we have kind of improved over the year and hopefully that continues for the next game as well.

“It was a tough week, and it was hard to get things back up, but you just have to get on with it and we were nearly gone out in the next game too and lads fought on their backs in fairness and they got us through it.

“Again, the next game after we were behind, fought again and got over the line and then brought to extra time by O’Dempsey's and we pulled it out of the fire again. We pulled away at the end in extra time, but it was really back and forth with them so look every championship game you win, and you get over the line, you don’t mind.

“If you win by 14 points and into the semi final or you win in extra time, it’s the same result at the end of the day and that’s the way we look at it.”

Their semi final rout of Ballyroan-Abbey was their most impressive performance of the year with their conversion rate hugely improved from some of their earlier games in the championship as Fitzpatrick explains.

While some of the more experienced heads are still leading the way, Portlaoise have added a lot of freshness to the team this year with 25 players seeing championship action to date. Fitzpatrick agrees that without a strong panel, championship success will be slim.

“That’s what we are trying to install into the group this year that it is a panel that will win you the championship. It’s a panel that gets you through the games because you don’t know who is going to be injured from one week to the next, so you have to be ready to step up.

“I think we have played 25 lads over the course of the championship so far. We have given eight lads their first championship start so there has been a big mix of players there in fairness and nobody that has come in has done anything wrong. Everyone who has come in has added to the team which is what we are hoping for every game.”

Portarlington are the team to beat nowadays in Laois but it wasn't that long ago when it was Fitzpatrick's Portlaoise that were the team everyone wanted to knock off their perch. He has been very impressed with Portarlington, the new kids on the block.

“They are a great outfit, there’s no denying it. They have gone to another level over the last two years in fairness to them. They have won the county championship and the league 10 days later after having a good few days of enjoyment.

“They didn’t need to start their best team against us so we know they have got massive strength in depth as well and it is going to be a massive game for us to get up to another level again above what we were at against Ballyroan and that is what we have to do to beat them.”

“We have been in their position I suppose for 20 years where everyone wanted to beat us and that’s what happens. When you are the best and you come up against the best, you want to beat the best and that is what you want to do.

“Everyone has always wanted to beat us. It has happened to us over the last year and a couple of times, teams got the best of us and we are looking at Portarlington as the best team in the county and we are trying to get up to their standard. We don’t know if we are there yet but we will give it a good go on Sunday and hopefully we will come out the right side on the day.”

He has had a tough two years in the job with Covid restrictions, not making the semi finals in 2020 and dealing with plenty of headaches along the way.

“When you play, you go home, you throw your bag down and that’s it, your session is done but when you are on the other side now, after been playing for so long, it’s a different world and when you take over a team in the middle of the Covid crisis, it hasn’t been the easiest task but this year has been a bit better obviously, how it’s worked out and where we are now but I wont say it’s been an easy job.

“It has been difficult, but I am starting to enjoy it a lot more now because we are getting the results we wanted to get, and lads are trying to implement the way we are trying to play. We are in the middle of November now and playing a county final it’s a long year and it’s a long trek. I wish the season wouldn’t go on this long.

“Even the last day, having use of the dressing rooms and being able to come out and relax a bit more before the game, not having to go up into the stand and not having to tog out in the stand beside supporters.

“It makes them (players) relax more going into the game and it makes it feel more like a championship game. You are going into a county final against the county and league champions, you would hope there will be a big crowd there from Laois.

“The two biggest clubs in Laois you want them to fulfil their potential and try and drive on the county team as well next year so hopefully there will be a good crowd there to see a good day out really.”