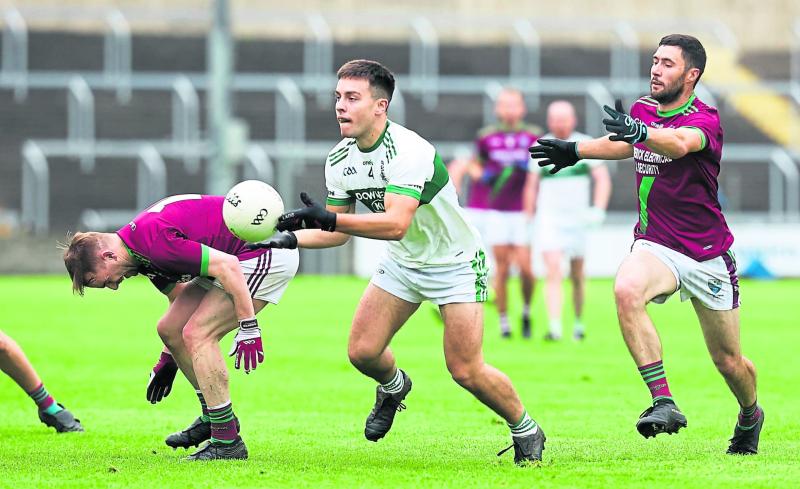 Gary Saunders is one of the new generation of Portlaoise footballers that grew up in an era when Portlaoise couldn't stop winning.

Since coming of age, he has graduated to sharing the pitch with some of players he idolised growing up and he is now one of their key men for Sunday's final clash with Portarlington.

Dealing with an early exit from the championship in 2020 hurt them but the time since has given them the opportunity to get back to brass tax and get back to where they belong – on the big stage.

“I know it’s only been a year, but it feels longer than that with Covid and everything that has gone on. At the start of the year, not many people would have expected us to get this far but we are here now, and we will see what happens with lots of work to do over the next few weeks.

“It gave us time to really regroup last year and to put the right structures in place to get back to the final really and it’s after happening now. Looking at the team, it’s a relatively young enough team like so even for the young lads that came in, there was some difference.

“It brought new energy and new life around the camp so that helped us out a good bit, just meeting new lads training you would know them coming up but when you are training with them, it’s different and there’s still a bit of a bond with them”, explained Saunders.

Losing the opening round game to Courtwood wasn't part of the grand plan but it was the hand they were dealt and have knuckled down since to get back to the final.

“We lost the first-round game, probably lucky to come through the second game as well. We were a good few points down and they got a man sent off and it probably turned the game in our favour and they are small margins like that that do change games so we have been a bit lucky to get this far, hopefully we will drive on now and see what happens.

“Our backs really were against the wall and we knew after the first game since we lost to Courtwood. It was do or die every game really and every game was a knockout game if you wanted to get back to the final and that’s just the way we looked at it.”

He was quick to praise the impact of manager Kevin Fitzpatrick and the work he has done to gel the team together during a time when it would have been easy to lose that connection with each other during the Covid restrictions.

“Kevin has been great now pulling us all together especially during lockdown and Covid where you probably can’t really meet up as much and dressing rooms being closed for the last two years too.”

Saunders has been used in the full back line and the half back line during 2021 but he insists that it is all about where the management think he can do the best job. No one man is bigger than the team and he will line out whereever he is needed.

“Wherever Kevin feels I can do the best for the team, I don’t mind playing anywhere once I get to play. I am lucky enough to be playing in a team like Portlaoise so anywhere I play, I am happy.

“In my first year when I was 18, I think O’Dempsey’s were in the final. Just getting the chance to train with a few of the boys who you would look up to especially the likes of (Kieran) Lillis and I think (Cahir) Healy was playing that year too so it was unreal just to even get in the dressing room with them, it’s always something I’ve wanted to do.”

The task ahead of them is massive. Portarlington will be favourites going into the game and Saunders believes it's hard to argue with that point.

“We will have to be at 110% to get the better of them. They’re the kingpins of Laois football now and they are an excellent side.

“You look at them and you try to find one or two weaknesses and it’s hard to come across any. We will try our best to get over the line and it will take everything we have.”

COUNTY FINAL PREVIEW: "We will have our hands full” - Portarlington's Robbie Piggott