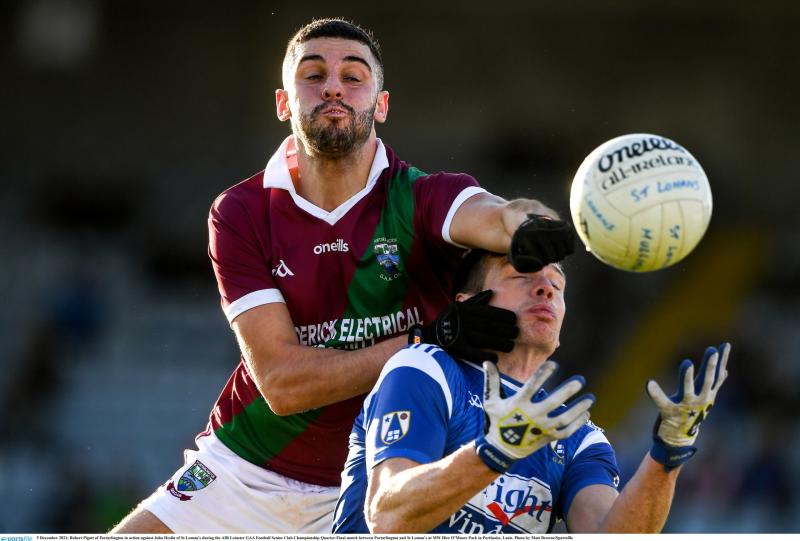 Portarlington's epic year continues as they booked a Leinster club semi final berth in Croke Park by seeing off St Lomans of Westmeath in a titanic battle in O'Moore Park on Sunday.

It was heart racing stuff from start to finish and while it was far from a polished performance, getting over the line against a level of opposition that they hadn't come up against in the last couple of years will be a massive deal for them.

They now play Kilmacud Crokes in the semi final in a fortnight as the Port train marches on.

It was a rip roaring start to the game from the Laois champions. Ronan Coffey opened the scoring in the first minute after he collected a quick free and that same strategy would serve them well as the half wore on.

Paddy Dowdall brought the sides level a couple of minutes later but from here, Port began to really dominate the game. Colm Murphy put them back in front before a surging run up the field from Paddy O'Sullivan saw him open his account.

Leading 0-4 to 0-1 after seven minutes, they were about to really grab St Lomans by the throat. Just like the opening score of the game, Port won a free but this time it was Colm Murphy who took it quickly and put it on a plate for Rioghan Murphy who had made a run towards goals.

Murphy still had work to do but he coolly evaded his man and sent a left footed rocket to the corner of the net. By the time David Murphy pointed in the ninth minute, five of the six Port forwards had all scored from play while Rioghan Murphy added to his goal with a well taken point on 12 minutes to make it 1-6 to 0-1.

St Lomans did come more into the game just before the water break. John Heslin kicked a free while Ronan O'Toole clipped over a fine effort to leave it 1-6 to 0-3 at the water break.

St Lomans kept that tempo up after the restart too with Heslin kicking another free and Ronan O'Toole expertly curling over a left footed effort on 24 minutes to leave it 1-6 to 0-5. They could have been closer too with Shane Dempsey's effort from close range blocked off the line.

Portarlington needed a score to break the momentum and they got it three minutes from the end of the day ending a 14 minute scoreless run. Paddy O'Sullivan burst up the field again and fed Colm Murphy who popped over his second of the game.

Port corner back Alex Mohan was shown a black card on 28 minutes with Heslin curling over the resulting free. With the last play of the half, St Lomans midfielder Fola Ayorinde got his name on the scoresheet and having led 1-6 to 0-1 at one stage, Port went in at half time only leading by three - 1-7 to 0-7.

With Alex Mohan in the sin bin for the opening seven minutes of the second half, St Lomans began to make hay. Adam Ryan did get the opening score of the half for Port to put them four ahead but three minutes later, St Lomans were in front. After an effort was originally waved wide by the umpires was overturned and given as a point, they struck for goal with TJ Cox firing home from close range to level it up.

John Heslin then kicked his fourth free to edge them ahead in what was a dramatic turnaround. Port are made of stern stuff though and after Colm Murphy levelled the game, Jake Foster put them back in front on 44 minutes.

It was end to end and energy sapping stuff and the sides went in all square at the second water break thanks to a Peter Foy score that brought it to 1-10 each.

Port then hit the front again thanks to a superb team score finished off by Adam Ryan and a fourth of the day for Colm Murphy as they held a two point lead with 12 minutes to play.

It was no surprise that St Lomans came back yet again and points from Heslin and Sam McCartan in quick succession squared the game up again with nine minutes to go.

It was frantic stuff. As tiredness crept in, mistakes increased and the tension intense. Port went on and opened up a two point lead again with Jake Foster and substitute Stephen O'Neill leaving them in the driving seat with six minutes to go.

They proved to be the final scores in the game as they held off late Lomans pressure and rejoiced at the final whistle.