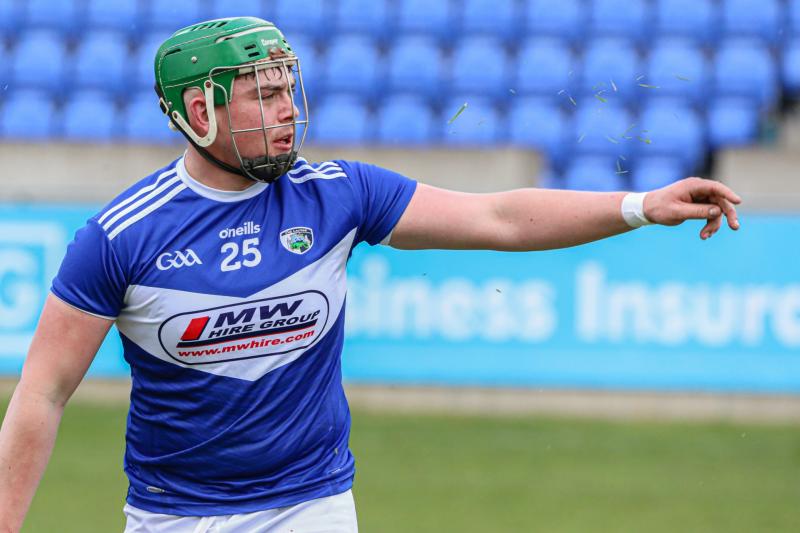 Laois are safely through to the quarter finals of the Leinster U20 hurling championship after they got the better of Kildare by eight points in Newbridge on Saturday afternoon. Laois were the better side over the 60 minutes and apart from a 10 minute spell at the start of the second half, they had Kildare's number all afternoon.

It was an impressive display over a Kildare side who had nine of the team that beat Wexford in last year's championship. Laois will now await the winners of Wexford and Westmeath in the quarter final.

Laois looked like they meant business from the start. James Duggan was unlucky not to get in for a goal in the opening minute but Laois did get the goal they threatened two minutes later. Cillian Dunne took off on a mazy run through the heart of the Kildare defence and while his shot was blocked on the line, Adam Kirwan was on hand to send the rebound to the net for the opening score of the game.

Kildare hit back with a point from Darragh Melville but by the seventh minute, Laois were 1-3 to 0-1 in front after James Duggan and two points from Cillian Dunne sent the Laois men clear.

Kildare were never going to lie down, especially on their home patch and they hit back in style with three points in a row to narrow the gap to 1-3 to 0-4.

Laois got back in on the scoring action with two points in as many minutes as Dan Delaney tapped over a free while Adam Kirwan added to his early goal with a fine point to put them four in front.

Frees were exchanged at either end but by the 20 minute mark, Laois led 1-6 to 0-5 and were the better team on show. Noah Quinan added another point on 23 minutes while at the other end, Paddy Hassett was called upon to make a fine save and kick his goals in tact.

Another free from Delaney coupled with a second point of the half for Adam Kirwan saw Laois open up a 1-9 to 0-6 lead with two minutes left to the break.

Things got better before the break with Noah Quinlan floating over another point but the last say of the half fell to Kildare midfielder Jack Higgins who fired over his third point of the half to leave it 1-10 to 0-7 in favour of the Laois men at half time.

Kildare came out a different animal after half time. They brought more intensity to the game and Laois were struggling to deal with it. It took Laois eight minutes to score after Tomas Keyes fired over having come on at half time but in that time, Kildare had added two to narrow the gap back to five points.

Kildare continued to have the upper hand and hit a real purple patch with three points in two minutes, two of which in the space of 20 seconds from Fionn Maher to leave it 1-11 to 0-12 with 20 minutes to go.

Laois badly needed a score and their talisman provided it with James Duggan getting his first of the day on 42 minutes to give Laois a three point cushion.

That score brought Laois back to life and further scores from Dan Delaney (free) and Cillian Dunne were followed up by the lively Adam Kirwan bringing his personal tally to 1-3 as Laois took back command with a 1-15 to 0-12 lead after 45 minutes.

Laois weathered that early second half storm well and now were back in full control with points from Tomas Keyes and another free from Delaney leaving them seven points clear with 10 minutes to go.

Ian Shanahan raided up from corner back to nail a long range effort to put them eight clear with three minutes to go. Kildare did keep going to the end and three quickfire points, the pick of them from Aidan O'Brien brought Kildare back to within five points as the game entered five minutes of injury time.

Cody Comerford ran himself into the ground all day and he got a deserved score in injury time along with two Cillian Dunne frees to earn an eight point win in the end.