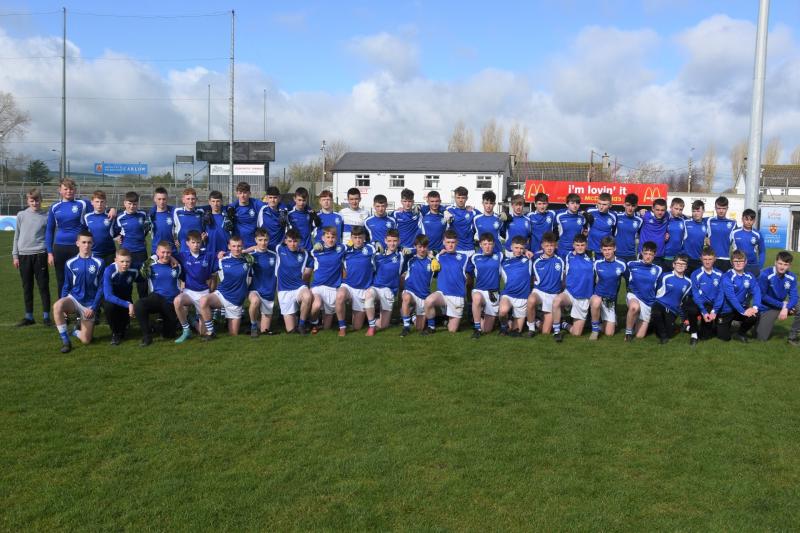 There was heartbreak for Knockbeg College’s Second Years in Dr Cullen Park as they were beaten by Good Counsel. A strong finish to both halves by the Wexford outfit was the difference in the end of what was a very entertaining affair.

Knockbeg played against the wind in the first half and made a simply stunning start. Ennae Byrne and Blake Rice pointed early before the former scored a great goal after being picked out by Eoin Ryan and then rounding two defenders to find the net.

Good Counsel were dangerous but Graiguecullen’s Cody Tucker pulled off fine saves to deny Mikey Kent and Mitch Cullen early on. Knockbeg were then awarded a penalty at the midpoint of the half when Ennae Byrne was fouled as he headed towards goal.

Killeshin’s Blake Rice took it but Good Counsel keeper Kyle Murphy thwarted him. Knockbeg did well to recycle the ball though and Eoin Ryan swung one over to leave Knockbeg six ahead.

However, the game flipped after that and Good Counsel came roaring back. Darren Rossiter got their first score after 17 minutes and followed that with a free soon after. Lively forward Dara Sinnott then finally beat Tucker for Good Counsel’s first goal and then caught Knockbeg with a sucker punch in the third minute of added time.

It looked like Knockbeg had cleared a dangerous ball but Mikey Kent gathered it and fired it low to the corner to leave them 2-2 to 1-3 ahead at half time. Just as they did in the first half, Knockbeg started the second very well and with the wind at their backs this time, it looked like they would go on to win.

Ennae Byrne landed a free and then one from play before David Dwyer curled one over to give them the lead again after 42 minutes. But unfortunately they lost their way after that and failed to score for the remainder of the game.

Darren Rossitter drew Good Counsel level with further points and they kicked on with late scores via Martin Sinnott and James Reburn to win by four in the end.