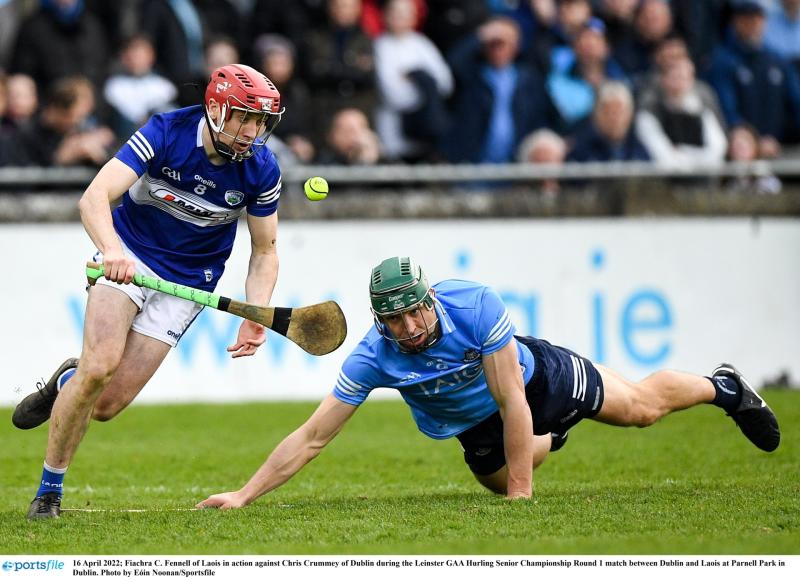 Seamas ‘Cheddar’ Plunkett’s charges began their 2022 Leinster Senior Hurling Championship campaign with a trip to the Capital, as Laois looked to once more upset Dublin just like they did three years ago.

However, travelling with an injury-riddled squad, this task was made just that bit more difficult. Nevertheless, Cheddar Plunkett’s charges had nothing to lose in this round one clash and very much played like it throughout.

Laois were far more clinical than Dublin in the first half, as the home side hit nine wides in the opening half. Laois’ full-forward, PJ Scully, was sublime with his score-taking, as he landed five points, while Mark Dowling also grabbed a goal. Laois led by a point at half-time.

However, Dublin were much improved in front of the posts in the second-half, and wasted no time in turning the game around upon the restart. Dónal Burke found his range with a couple of nice scores, before an Alex Considine goal put Dublin five to the good.

Laois, to their credit, never gave up and whittled it down to just two points approaching the end, with Enda Rowland burying a free. Rowland had a chance to win it at the very end with another close-range free, but his effort was deflected wide and Dublin held on.

Laois opened the scoring in Parnell Park through Ross King, who caught Enda Rowland’ puck out and fired one between the posts over his shoulder. Dublin opened the account straight after through Chris Crummey, but PJ Scully replied with a free to put Laois back ahead.

Dublin went in front for the first time thanks to two Dónal Burke frees, but they would also continue to rack up a wide count during this period of play and that allowed Laois to remain close.

Laois levelled it at three apiece thanks to a lovely point from PJ Scully, who shows nice close control before raising a white flag. Laois then grabbed the first goal of the game to gain the early initiative in Parnell Park after ten minutes.

Full-back Ciarán McEvoy dropped an effort from distance just short of the Dublin goalmouth. However, Dublin keeper, Seán Brennan, didn’t deal with it and it fell straight into the path of Mark Dowling who fired it into the net.

Dublin continued to struggle in front of the posts, but they eventually settled down and levelled the affair once more after seventeen minutes. Two frees from wing-forward Dónal Burke, along with a point from play from full-forward Fergal Whitely had the hosts level.

Dublin then went ahead thanks to another Burke free, but Laois finished the half strongly to take a slender lead at half-time. PJ Scully, who was in sensational form in front of the posts, scored a free and a point, while the heavily influential Enda Rowland also knocked over a free.

Dónal Burke pointed two more frees from placed balls, but PJ Scully scored a free down the opposite end to send Laois into the dressing room with a 1-7 to 0-9 advantage at the break.

Dublin showed their intent upon the restart, with main man Dónal Burke landing three sublime scores from play. Enda Rowland and PJ Scully frees opened Laois’ account for the second half, but they quickly found themselves behind.

Burke slotted over another free, before Laois sub Aidan Corby responded with a superb score. The two full-forwards, PJ Scully and Fergal Whitely, traded points before Dublin grabbed a goal to put them in a healthy position.

Substitute Alex Considine squeezed in an effort from a tight angle for the home side. Laois kept plugging away and gave themselves a chance down the stretch, with James Keyes landing a couple of nice scores.

With Laois trailing by five, Enda Rowland stepped up to a close range free after Paddu Purcell was brought down near to the goals. Rowland only had one thing on his mind, as he buried it low and hard into the Dublin net.

PJ Scully converted a free to leave just two between them, and then Rowland was given a the chance to win the game from another close-range free. However, Dublin managed to deflect this one wide and Laois fell just short I the end.