Laois minor hurlers pounce at the death to slay Wexford 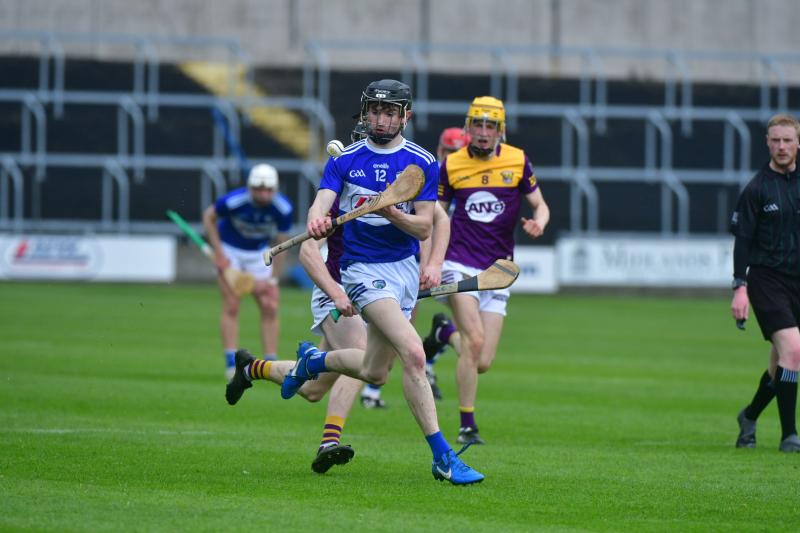 The Laois minors played out an end-to-end Leinster quarter-final with Wexford in O’Moore Park.

Laois looked comfortable in the first 50 minutes of the match, as they led 1-13 to 1-6 at that stage.

A first half goal from Eoghan Cuddy, along with Ben Deegan knocking over nine frees, saw Laois go into the last ten minutes with a commanding lead. They were also a man up as well, with Simon Roche sent off in the second half for Wexford.

Wexford came alive when it mattered most though, with Cillian Byrne scoring two quick-fire goals, one from play and one a penalty, to get them back into it. Further points from Byrne and substitute Evan Quigley put Wexford ahead in the dying stages.

However, it’s not over until it’s over, and Laois proved that here. Ben Deegan’s long ball into the Wexford square was flicked into the goals by Laois full-forward Jer Quinlan, and the home side managed to steal this one at the death.

Ben Deegan opened the scoring for the home side, as the wing-forward slotted over a free. Wexford cancelled that out through a converted free from full-forward Matthew Murphy.

Deegan landed another point from a placed ball, before the first goal of the game went Wexford’s way. A long free from goalkeeper Jason Rossiter was broken down in the square, and Cillian Byrne was alive to the breaking ball to smash home a low effort into the bottom left.

Laois responded well to that setback though, with a free from Deegan being followed by a point from play from full-forward Jer Quinlan, who struck over under pressure.

Wexford hit a few wides around the mid-way point of the first half, and that allowed Laois to build up a lead. Deegan knocked over another free, and then centre-forward Liam Kirby fired over an excellent score after good hustling from Jer Quinlan.

Jack Breen’s pace caused Wexford nightmares in the first half, as the Castletown native was up and down the wing all day long. Breen curled over a brilliant score from out near the sideline to put Laois three to the good.

Breen popped over another score minutes later, she played a swift one-two with Quinlan before drilling over. Wexford ended their drought in front of the posts through Simon Roche, but Laois took the upper hand with their first goal.

Goalkeeper Brochan O’Reilly’s free dropped short into the Wexford square, and their defence failed to clear the sliotar. It fell out to Camross man, Eoghan Cuddy, and he only had one thing on his mind as he slammed home a low effort.

Wexford ended the half well, with Cillian Byrne knocking over a couple of frees. They trailed 1-4 to 1-8 at the half-time interval.

Deegan dropped over two points from placed balls to begin the second half, before Wexford received a massive blow when they were reduced to fourteen men.

Andrew McDonagh then drove over a sublime score to put Laois seven to the good. Wexford opened their account for the second half through Cillian Byrne, but Deegan replied down the other end with another free.

Byrne and Deegan exchanged points from placed balls before Wexford gave themselves a lifeline with eight minutes of normal time remaining. Midfielder Páidí Doyle’s powerful run saw him offload to Cillian Byrne, and Byrne’s shot proved too strong for Brochan O’Reilly in the Laois net.

That goal seemed to cause panic in the Laois side, and they conceded another goal minutes later. Páidí Doyle was brought to the ground by Laois defender Cormac Hogan just inside the Laois square, and referee Ciaran Flynn signalled for a penalty.

Byrne buried his hat-trick goal in from the spot, and all of a sudden, the fourteen men of Wexford were only trailing by a single point. The away side were then level on fifty-nine minutes, as Byrne placed over a point from play after Dylan Purcell played it to him in space.

Wexford thought they had won it when substitute Evan Quigley landed a sublime score from distance, only for Laois to steal it at the last-minute. Ben Deegan’s attempt from long-range dropped short into the Wexford square, and Quinlan managed to get a flick to it that ended in the back of the net.