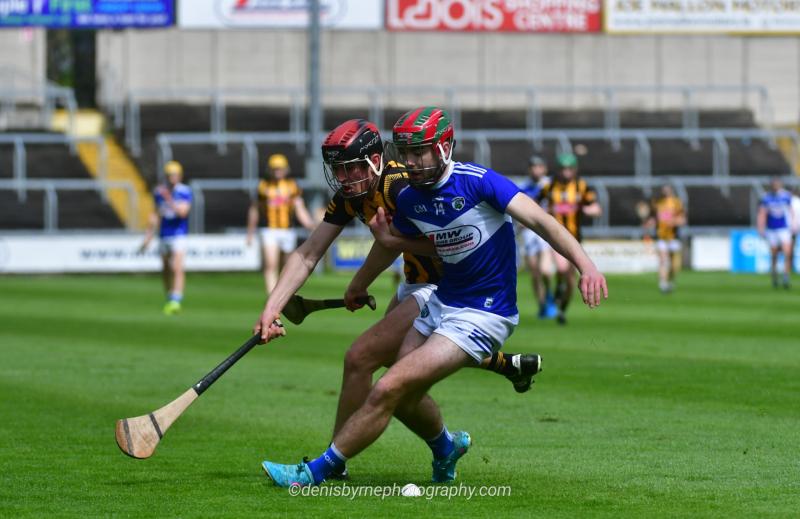 After surprising Wexford in the quarter-final of the Leinster Minor hurling championship, Declan Quarter's charges advanced through to a semi-final meeting with Kilkenny in O'Moore Park.

Laois held no fear of that challenge, as set out their stall early here and a Jer Quinlan goal had them three ahead at half-time. Quinlan knocked over a few more brilliant scores in the second half, and with Ben Deegan accurate from frees, Laois remained three ahead at full-time and can now look forward to a final with Offaly.

Laois showed their hunger and desire from the whistle in O’Moore Park, as pressure from their forward line made Kilkenny concede a free. Ben Deegan stuck it between the uprights, and the home side were first on the scoreboard.

Laois full-forward, Jer Quinlan, then showed the dangers he possesses by earning another free for Laois. Quinlan was brought down close to the square after showing a nice turn of pace, and Deegan once more tapped over the free.

Deegan knocked over a third free minutes later, with Kilkenny finally getting on the scoresheet in the ninth minute thanks to an Aaron McEvoy free. McEvoy popped over another placed ball shortly after, but Deegan replied with another free down the other end of the field.

Laois were looking to send long-ball into Jer Quinlan in the second half. On one occasion, Deegan dropped one into the square, but Kilkenny managed to prevent Quinlan from getting a touch to it and cleared.

Kilkenny forwards were finding it difficult to get the ball to stick, as the Laois backline were not giving them a minute to breathe. Joe Pearson and Tom Cuddy were superb in winning those fifty-fifty balls in the backline.

Anthony Ireland-Wall did level the match by sending over two fine scores from play, but Jer Quinlan restored Laois’ lead. Quinlan scored Laois’ first point from play, as the Borris-Kilcotton native managed to win a puck-out from goalkeeper Brochan O’Reilly and strike between the posts.

Kilkenny once more levelled, this time through Rory Glynn, but Deegan responded by blasting over a brilliant point from play. Then Laois struck for the first goal of the game, and it was no surprise who scored it.

Strong running from Laois wing-back Thomas Brennan saw him find Cormac Byrne, and Byrne quickly passed to Quinlan who rattled the net. Kilkenny midfielder and captain Tom McPhillips pointed the last score of the half, but Laois remained 1-6 to 0-6 in front at half-time.

Laois got off to a brilliant start to the second half. Quinlan fired over another point off a Brochan O’Reilly puck-out. Deegan converted another free, and then Cormac Byrne got his name on the scoresheet to put Laois six ahead.]

Kilkenny, to their credit, responded well to the early Laois pressure. Edward McDermott and Anthony Ireland-Wall raised white flags for them. While Quinlan replied with another excellent score, Greg Kelly fired over a point for Kilkenny to leave four in it.

Deegan dropped over a free for Laois, but Kilkenny replied once more with points from Eoghan Lyng and Greg Kelly. Kilkenny were putting Laois under enormous pressure now, as it was noticeable their energy levels had gone up a few gears.

However, Cormac Byrne grabbed a massive score to relieve some of that pressure. Byrne took on his marker before curling one between the posts. Substitute Michael Brennan replied for Kilkenny, and while Deegan hit back with another free, a Mikey Stynes point left three between the teams with five minutes of normal time left.
Kilkenny continued to pile on the pressure, with further points from Eoghan Lyng (free) and Ivan Bolger leaving the minimum in it. However, once more it was Quinlan who stepped up for Laois, as he rose to catch O'Reilly's puck out and draw a free.

Deegan converted that free, and then the same man delivered once again. Laois won a free inside their own half, and Deegan dropped a bomb over the bar from long-range.

Kilkenny had one last chance from a close-range free to force extra-time, but Brochan O'Reilly got down low to save Eoghan Lyng's low effort. Referee Adam Kinahan blew seconds later for full-time, and Laois had booked a Leinster Minor hurling final with neighbours Offaly.