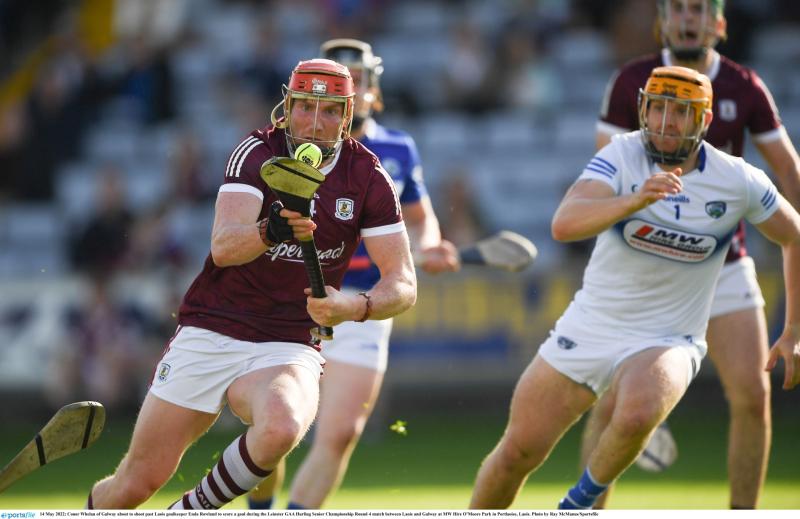 Coming off the back of three tough defeats at the hands of Dublin, Kilkenny, and Wexford, the Laois Senior hurlers had another daunting task ahead of them when they welcomed Galway to O’Moore Park on Saturday evening.

While Seamus ‘Cheddar’ Plunkett’s charges gave a decent account of themselves in the first half, it was all one-way traffic in the second half unfortunately. Galway proved far too strong, as expected, and Laois now face a massive game against Westmeath to decide whether they drop down to Joe McDonagh level next season.

Paddy Purcell opened the scoring for Laois here, as Purcell played a swift one-two with Cha Dwyer before splitting the uprights. Galway responded in style though by rattling off nine unanswered points, and it appeared like it was going to be another long day at the office for Laois.]

Cathal Mannion got Galway on the scoreboard, before full-forward Conor Whelan showed his pace and power by slotting over another two points. Tom Monaghan was extremely impressive in midfield for Galway, and he placed over three points to his name.

Further scores from Cathal Mannion, Joe Cooney and Cianan Fahy had Laois trailing by eight points with only seven minutes played. Credit to the Laois team here though, as they dug deep and got themselves back in the swing of things.

Paddy Purcell ended the Galway run with a nice score under pressure, and then Cha Dwyer delivered by swinging over two fine points. Another point from Purcell, this time after a trademark powerful run, meant Laois had halved the deficit.

Cathal Mannion returned Galway to the scoresheet, but a Ross King free was followed by a brilliant score from Laois wing-back Fiachra C Fennell. Mannion and King (frees) exchanged points from frees before Galway finished the half on top to take a healthy half-time lead at the break.

A Conor Cooney free was followed by a score from corner-back Jack Grealish, who tore up the field before calmly firing over. Laois goalkeeper Enda Rowland replied for Laois with a free inside his own half, but Galway rattled off two more points thanks to Conor Cooney (free) and Joseph Cooney.

James Keyes curled over two excellent efforts for Laois, but scores from Brian Concannon and Tom Monaghan meant Galway held a 0-18 to 0-12 lead at the interval.

Galway put this one to be upon the restart of play. Corner-back Darren Morrissey burst up to fire over the opening score of the second half, and further points from Conor Cooney and Fintan Burke had Galway on their way.

Jack Kelly replied for Laois, as he showed off his nice turn of pace to breeze by a couple of challenges before firing over. Fintan Burke and Conor Cooney hit back for Galway, and while Laois full-back Sean Downey drove over a monster score from inside his own half, Galway grabbed their first goal shortly after.

Darren Morrissey landed another point from corner-back, and then Conor Whelan buried a goal after Enda Rowland failed to clear his lines. Galway were relentless, as they attacked Laois in waves and rattled off another six points on the spin.

Laois, to their credit, did finish the second half somewhat respectably. Laois U-20 player, Tomas Keyes, was introduced off the bench and made an immediate impression by raising a white flag from play.

Galway replied with an Evan Nilard free, and then they hit goal number two. Midfielder Joseph Cooney managed to squeeze one in from the tightest of angles.

Laois kept plucking away, with Ross King and James Keyes landing a point apiece. Cathal Mannion showcased his class towards the end by curling over three points.

Laois’ final scores came from King (free) and substitutes PJ Scully, who fired over two. The home side were comprehensively defeated though, and it remains to be seen whether they have the ability to lift morale and get a result against Westmeath the next day out.