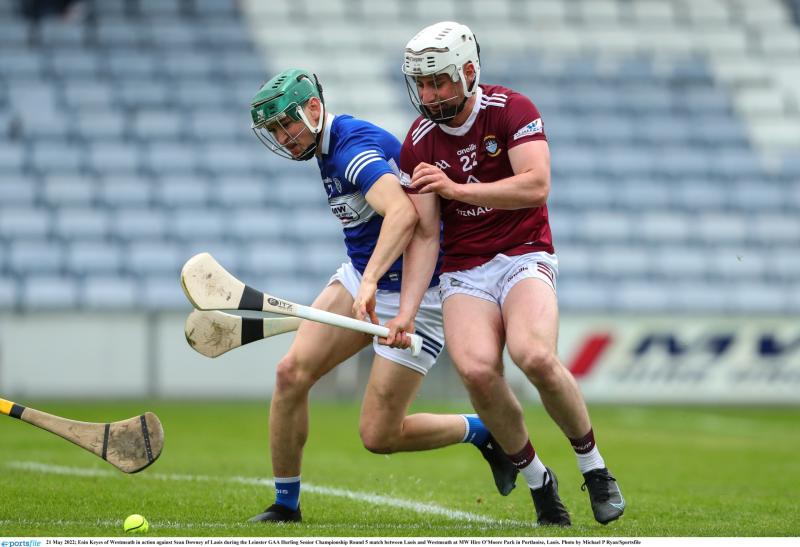 It's been a challenging season for Seamus 'Cheddar' Plunkett's charges, as the Laois Seniors hurlers have shipped some heavy defeats throughout this Leinster campaign.

Laois faced Westmeath in O'Moore Park in a crucial match where the losers of this knew that relegation to the Joe McDonagh Cup was a strong possibility. It was another tough day at the office for the Laois men, as they fell to a disappointing eighteen-point loss.

There is still a chance that Laois remain at Liam McCarthy level this season though. If Kerry manage to beat Antrim in the Joe McDonagh Cup final in Croke Park, Laois will keep their status and a Munster team will instead drop down.

Westmeath got off to a brilliant start, as wing-forward Niall O’Brien swung over a score with their first attack. Full-forward Joey Boyle then landed another, and the away side were three to the good following a point from captain Killian Doyle.

Laois responded well to the early onslaught by firing back with two scores. They were two magnificent points as well, with Paddy Purcell and Cha Dwyer both splitting the uprights from distance.

Killian Doyle knocked over a close-range free for Westmeath, but Laois levelled minutes later thanks to a long-range free for keeper Enda Rowland and a point from Ross King.

Powerful and direct running from Ciaran McEvoy resulted in him setting up James Keyes, and Keyes put Laois ahead for the first time in the match. Joey Boyle levelled for Westmeath shortly after, but another Rowland free-edged Laois ahead once more.

Cormac Boyle placed over from close-range following a swift counter-attacking move from Westmeath, but Laois hit back with the next two points. Corner-back, Padraic Dunne, slammed over an effort from distance, and then Ben Conroy fired over from just outside the square.

Laois had the first goal chance then in the twenty-fifth minute. James Keyes played in Stephen Maher, but Maher couldn’t connect properly and the Westmeath keeper, Noel Conaty, saved.

Ross King put the home team three ahead through a close-range free, but Westmeath replied with a goal. There didn’t appear to be much danger when Eoin Keyes received possession, but Keyes strode powerfully towards the Laois net and batted home a fine goal.

Westmeath built on that momentum, with Eoin Keyes, Killian Doyle, and Joey Boyle (free) all raising further white flags to put them in front. Laois halted that momentum by scoring a goal themselves though.

Ross King received possession near the corner flag and was surrounded by two Westmeath defenders. King held his composure though and played a clever ball into the path of Paddy Purcell, who caught and dispatched it to the net.

Westmeath finished the half slightly on top, with a point from Jack Galvin and two from Killian Doyle. Rowland (free) and Keyes knocked over efforts for Laois, as they trailed 1-11 to 1-12 at half-time.

Killian Doyle got Westmeath on the scoreboard for the second half, but Rowland replied for Laois with his fourth free. Laois kicked on after that, with two points from Ross King giving them the lead again.

Westmeath levelled through a sublime Niall O’Brien score, before the away side hit several bad wides which could have seen them go ahead. Ben Conroy punished that sloppiness with a point for Laois, but Westmeath then grabbed their second goal.

Westmeath then fired in their third goal, with Niall O’Brien burying it past Rowland. While King replied with a converted 65’ for Laois, another Westmeath goal from Niall Mitchell put them ten to the good.

Laois could not get back into the game from there, as points from Jack Galvin, Killian Doyle, Aaron Craig, and Davy Glennon saw Westmeath comfortably home to the finish.

Laois will now wait for the Joe McDonagh Cup result to see whether or n0ot they will be playing Liam McCarthy hurling again next season.