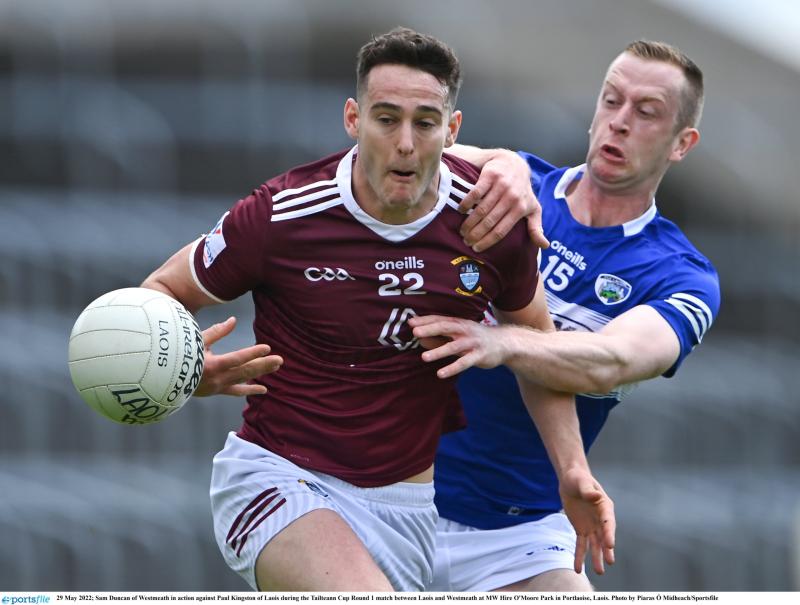 Sam Duncan of Westmeath in action against Paul Kingston of Laois during the Tailteann Cup Round 1 match between Laois and Westmeath at MW Hire O'Moore Park in Portlaoise, Laois. Photo , Sportsfile

Following a thrashing at the hands of Wicklow in the first round of the Leinster football championship last month, the Laois Senior footballers looked to get their season up and running in the first edition of the ‘Tailteann Cup’.

Billy Sheehan’s side faced one of the competition’s favourites in Westmeath though, who had destroyed Laois last season in the Leinster championship. Laois gave a far better account of themselves here, but Westmeath proved slightly the better team and ran out three-point winners to advance.

Westmeath opened the scoring through a close-range John Heslin free, and the Lakeside County doubled their advantage a minute later thanks to a Luke Loughlin score from play. Laois got on the scoresheet through midfielder James Finn, whose long-range effort dropped just over the crossbar.

Laois then levelled with an Evan O’Carroll point, but it could easily have been a goal for the full-forward. O’Carroll showed his power and pace to take on his marker and beat him, and his low shot looked to be going in only for David Lynch on the line who deflected it over the bar.

Westmeath then were awarded a penalty down the opposite end. A lovely team move involving Jamie Gonoud, Ronan O’Toole, and David Lynch saw Lynch go through, and he was brought down by Laois’ Trevor Collins in the square. However, John Heslin’s resulting penalty was expertly saved by Danny Bolger in the Laois net.

Luke Loughlin did convert the 45’ from their though, and Loughlin set up another score for Ronan O’Toole in the next play. Evan O’Carroll had another goal chance for Laois after that, as he received a lovely pass from Kevin Swayne but pulled his shot badly wide.

Westmeath’s Jonathan Lynam added another point for his side after a patient and well-worked team move. However, Jack Cooney’s side were dealt a massive blow in the nineteenth minute when Kevin Maguire received a straight red card following an elbow into Laois’ Evan Lowry.

Mark Barry curled over a free for Laois to leave two points separating the teams, and the O’Dempsey’s man added another in the twenty-fifth minute following strong running from Paul Kingston.

Laois were back on level terms through a second Evan O’Carroll point, as the Crettyard man caught a long ball in from James Finn, played a one-two with Mark Barry, and split the uprights.

Westmeath replied with a John Heslin free, but Laois took the lead thanks to scores from Evan Lowry (mark) and Donie Kingston. The home team enjoyed a narrow 0-7 to 0-6 advantage at half-time, and they were crucially a man up for another thirty-five minutes.

Laois grabbed a score straight from the throw-in at the start of the second half. Strong running from Paul Kingston saw the move ending up with a Mark Barry point. Sam McCartan responded with Westmeath’s first score of the half.

Laois were getting plenty of success thanks to their running from deep now. Centre-back Paddy O’Sullivan went on a charging run up the middle of the field, before transferring possession to Evan O’Carroll. The Laois forward swiftly turned on a sixpence before curling over under pressure.

Laois stretched their lead out to three thanks to a Mark Barry free, but that advantage would be wiped out minutes later. John Heslin managed to break down a Laois kickout, and Sam McCartan picked up possession. The Westmeath midfielder went on a striding run unchallenged, before unleashing a low rocket past Danny Bolger in the Laois net.

Billy Sheehan’s side were then dealt another blow after wing-back Sean O’Flynn received a second yellow card for bringing down Jonathan Lynam, and Laois no longer had a man advantage. John Heslin slotted the resulting free, and Westmeath now had the lead and the momentum.

Mark Barry levelled the match with another free. Luke Loughlin nudged Westmeath back ahead as we headed for the final ten minutes, and it was the away side who were playing the better football now.

Loughlin, who was Westmeath’s best forward, added another to his tally to push Jack Cooney’s men two to the good. John Heslin stretched that lead out to three, and while Evan Lowry and Evan O’Carroll kicked points to cut that deficit, Westmeath held on for the win.