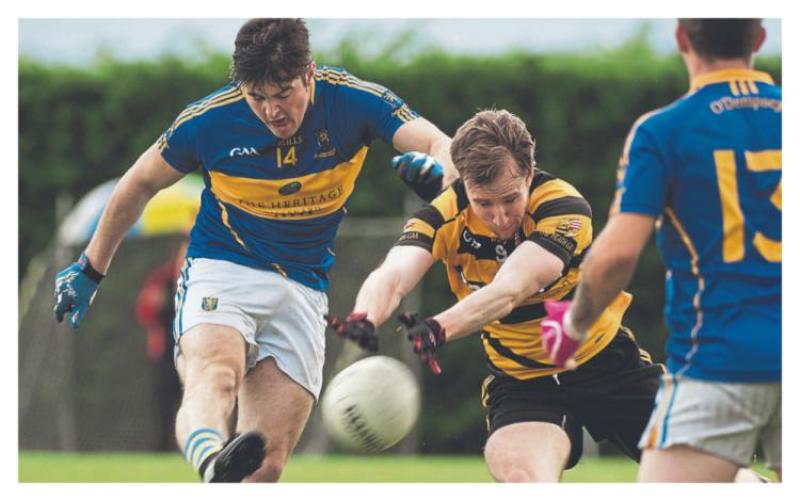 On a very wet night in Killenard, the current county champions Portarlington took on neighbour O’Dempseys. In the first half in particular the conditions were extremely poor. Both sides did well to create a very competitive opening 35 minutes.

It was O'Dempsey's that had the biggest share of possession, Eoin Finley was a huge threat inside in full forward and converted two very good marks early on. The Portarlington defensive structure in the first half was very strong and they forced the O'Dempsey's into kicking from long range which resulted in 6 wides in the first half and three balls falling into the hands of the Portarlington netminder, Sean Mooney.

Portarlington looked dangerous on the break. It was wing forward Rhiain Murphy that was consistently taking the ball out of the county champions and commencing the attack and Jordan Fitzgerald was the main talisman with three points first 30 mins. These breaks were rare. Overall, the Killenard side retained possession well and held a 2-point lead at halftime.

The second half saw the weather improve. When the sun came out so too did Dempsey’s killer instinct. The great defensive structure shown by the Portarlington in the first half was eventually worn down by some fast-attacking play and strategic passes by Dempseys. Eoin Finlay continued to impress and won some great balls on the inside full-forward line. Around the 45 min mark, David Howlin came onto the end of a ball across from Eoin Finlay to palm the ball into the back of the net.

The midfield pairing of Mark Barry and Barry Kelly didn’t give their counterparts a sniff. The Dempseys defence held Portarlington to just three points in the second half. One of the main performers from last year’s championship success, Jake Foster, came on at halftime. The prolific free-taker was held scoreless until the last kick of the game where he converted a free.

In the end, there were 9 points between the teams in favour of the Killenard team. O’Dempsey’s will take a lot of confidence from this comprehensive win over their neighbour with only 4 weeks to the Championship

“There was not much significance to the game tonight, but it is nice to get the win over Portarlington tonight. We defended brilliantly tonight holding them to 8 points. We were outstanding at the back. Overall, pleased with the team’s performance that we controlled the ball well, Kicked a few nice scores, and defended brilliantly.”