Laois win All Ireland Ladies Intermediate title for the first time in 22 years!!!! 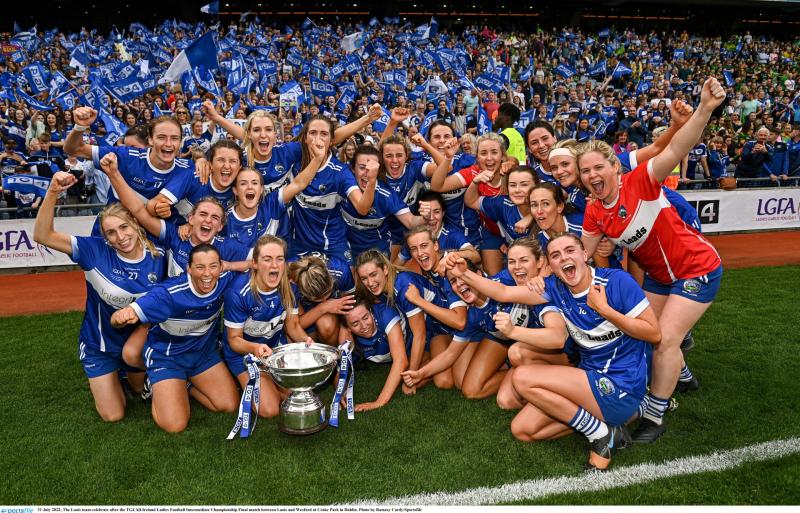 Laois are All Ireland Champions. Whether you're reading this from Croke Park, Mountmellick, Timahoe, Portlaoise, Abbeyleix, Portarlington or anywhere else in the O'Moore county, you know that this is a very special day for Laois.

Laois Ladies will be once again playing football at the senior level in 2023 after defeating Wexford in the All Ireland Intermediate Final.

As the teams lined up in front of the Hogan Stand behind the Artane Band. The noise from the large pockets of blue and white could be heard as far as Fagan's pub. This was the moment they had been waiting for. Little did they know they were in for a rollercoaster of an afternoon.

Straight from the throw in Laois drove at Wexford's defense, Erone Fitzpatrick sliced through and laid the ball off to Eva Galvin for the first score of the game. A minute later the same partnership was almost in for a goal, this time Galvin laid the ball off to Fitzpatrick but Erone's shot was just wide of the left post. Laois then had a scare as Murray played Donnelly in a ball who was through on goal, but she skied it over the bar for Wexford's first score.

13 minutes Mo Nerney kicks over the first score from a free to make it 3 points to 1. 5 mins later Catriona Murray of Wexford calmly put the ball over to make it a one-point game. With 10 minutes left in the first half, Mo Nerney got the game's opening goal two minutes later. A fantastic ball through left her clean in on goal and she duly obliged by slotting it in the bottom corner. 1-4 to 2 points.

Murray got her second point before Lawlor restored Laois's lead with a free of her own. Mo converted her third free to put Laois six points up. Erone Fitzpatrick then got the core of the game when she converted off the right when completely unbalanced. 30 seconds later she did it again from the exact same position. Emma Lawlor then got
one more right before halftime, to leave the nine points between the sides at halftime.

Laois was well on top in the first half and could smell victory. The Forwards have been impressive, especially Fitzpatrick and Nerney. Contributing 1-5 between them. 9 wides in the first half meant they should have the game put on the bed. but don’t let that take away from a very convincing first half.

The best player for Laois in that first half was the cornerback and captain Aimee Kelly. Constantly cleaning up loose balls time and time again. She has been commencing most of the Laois attacks. Leading by example with a sublime performance. Aisling Donoher also did extremely well holding the dangerous Aisling Murphy scoreless in the first half.

Wexford came out in the second half with a vengeance. Wexford substitute Aoife Cullen scored a fine point for her side in the 33rd minute. Kellie Kearney and Bernie Breen added points for Wexford. Ten minutes into the second half Wexford played a long ball in and Murphy caught it brilliantly with one hand and took a shot on but Eimear Barry pulled off a fantastic save. Catriona Murray came close to hitting the net when her 13-yard free bounced off the crossbar.

Aisling Murphy was beginning to hit form in the second half. She got her first point 15 mins into the seond half. Wexford kept kicking scores and was dominating the second half. Aisling Donaher was awarded a yellow card with seven minutes left. Wexford had two goal chances in very quick succession but Clodagh Dunne and Jane Moore pulled off two cracking blocks. Wexford got a late goal and a point but that wasn't enough to stop Laois from claiming All Ireland Intermediate Glory.