Clonaslee get the better of Ballylinan by 4 in round 2 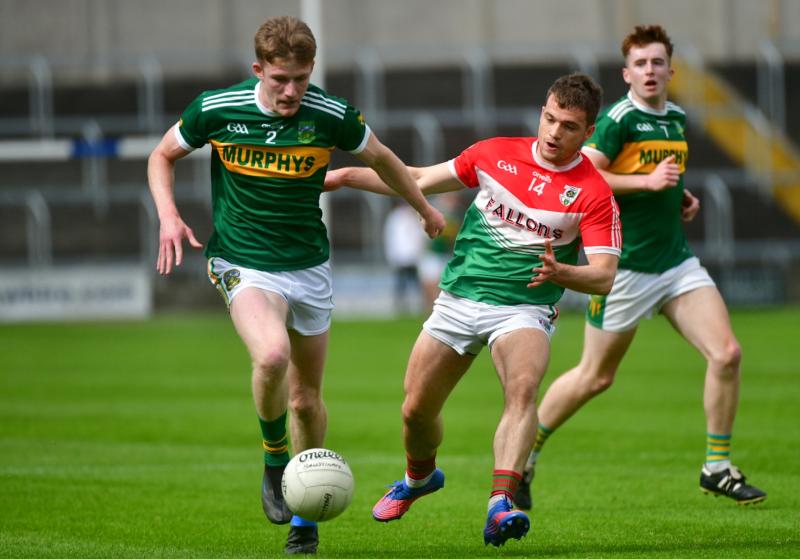 Ballylinan and Clonaslee St Manman’s met for the second year running in the Laois Senior football championship round two, with Ballylinan hoping to exact revenge on their opponents for their loss last season.

Ballylinan made a bright start to the opening match of this Saturday’s triple-header in O’Moore Park. Ciaran Fennessy kicked over the first score for them, and then Ciaran Farrell doubled Ballylinan’s advantage.

Clonaslee St Manman’s opened their account for the afternoon through a Niall Corbet free. Ballylinan were dominating the scoreboard early doors though, with Jamie Farrell placing over another lovely score to restore that two-point cushion.

Gary Walsh then made his presence known with a fine score. Walsh received the ball on the shoulder and beautifully curled one over with his right boot.

Cathal Lee replied for Clonaslee St Manman’s with a delightful score, but a Gary Walsh free from distance put Ballylinan three to the good once more.

Clonaslee St Manman’s were beginning to settle after a slow opening quarter, as their forward play became a bit quicker and more decisive. Bob Downey scored a brilliant outside of the boot score to leave two in it again.

Ballylinan were solid at the back for most of the first half, but Clonaslee St Manman’s did cut through their defence on one occasion. Niall Corbet burst through the centre at pace and offloaded to John Rigney, but his shot was well smothered down by Ballylinan goalkeeper Tom Wright.

Paddy Hyland received a pass inside and swiftly turned on his right to knock one over. Ballylinan hit a couple of bad wides down the opposite end, and Clonaslee St Manman’s punished that inaccuracy with points from Niall Corbet and Bob Downey.

A Niall Corbet free was the last score of the first half, as Clonaslee St Manman’s took a slender lead in with them at half-time on a score of 0-8 to 0-7.

Cathal Lee grabbed the first score of the second half for Clonaslee St Manman’s. Lee collected a ball in from Jack Owens, before squeezing one between the uprights in O’Moore Park.

Niall Corbet then helped Clonaslee St Manman’s go three up, as he rode a challenge well before curling over his fourth point of the day. Jamie Farrell got Ballylinan on the board for the second half, as he placed over with his trusty left boot.

Clonaslee St Manman’s then got in for the first goal of the game, and what a scintillating team move it was. Niall Corbet, unsurprisingly, was central, as he played a one-two with Bob Downey before picking out wing back Darragh Scully in the square, and Scully finished home.

Gary Walsh replied for Ballylinan through a close-range free, but they were malfunctioning up front. They hit a couple of very lazy wides in the opening stages of the second half.

However, Ballylinan were still pressing well and managed to grab a few scores back. Gary Walsh placed over two frees on either side of a score from a mark as well to leave two points separating the sides.

Clonaslee St Manman’s responded to take back that three-point cushion. John Rigney turned the ball over in his own half and played it to Niall Corbet. He played it into the onrushing Jack Owens who tore up the pitch before Owens offloaded it to Cathal Lee and he swung over.

Gary Walsh replied with a free for Ballylinan, but they would not score again after that. The sensational Niall Corbet helped Clonaslee St Manman’s go three clear once more, and now it looked like Ballylinan needed a goal.

However, Clonaslee St Manman’s held up strong at the back. Bob Downey placed over the insurance score in injury-time for them.