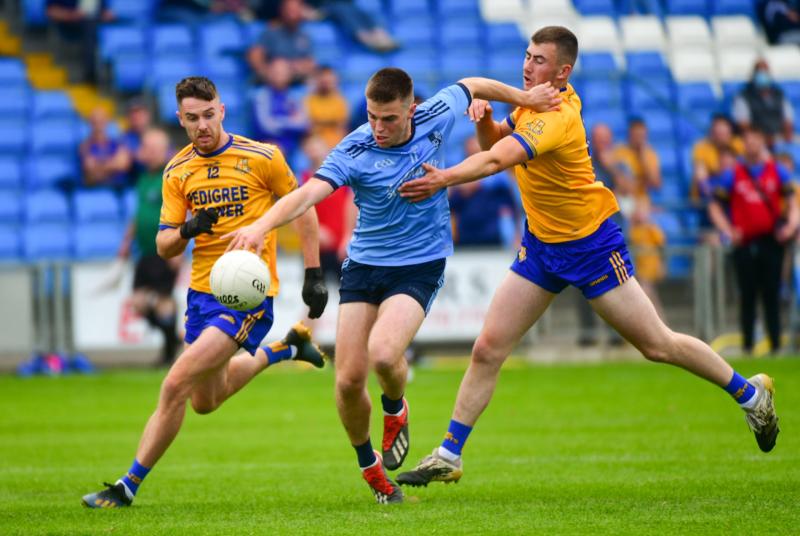 St Joseph’s and Ballyroan Abbey have got to know each other very well over the last few years in the Senior football championship. The pair were matched up once more in this round two winners’ section’ clash in O’Moore Park.

They played out another hard-hitting, tough, and tight contest here. In the end though, injury-time points from Brian Daly and Gearoid Lynch helped St Joseph’s into the last eight of the Senior football championship.

Ballyroan Abbey were goal-hungry though early on and scored their first goal in the fifth minute. Brian Whelan fed Padraig McMahon inside, and he toe-poked it low past the grasps of St Joseph’s keeper Aaron Cooney.

Brian Whelan then landed two simple frees from close-range to extend Ballyroan Abbey’s early lead. They then struck for goal number two, and it was the same man who bagged that goal.

St Joseph’s were caught completely asleep at the back, as all their backs were dragged towards the ball and that left Padraig McMahon free inside. McMahon made no mistake with the finish, as Ballyroan Abbey were off to a flier.

St Joseph’s badly needed something to get themselves going, and that spark came in the twelfth minute. Michael Keogh played a give and go with Eoghan O’Flaherty, before firing a shot that ended with Brian Daly volleying to the net.

St Joseph’s held a lot of possession after that, but they were struggling to create scoring opportunities due to a packed Ballyroan Abbey defence. The men in blue and black were counter-attacking at pace, and Connaire Gee grabbed their first score from play with a classy outside-of-the-boot effort.

St Joseph’s hit a few wides after that period, as Ballyroan Abbey continued to put their attacks under pressure. However, with a couple of minutes to go until half-time, St Joseph’s carved their way through for a crucial second goal.

St Joseph’s won the Ballyroan Abbey kick-out, and swiftly bore down on goal. Eoghan O’Flaherty played it into Michael Keogh, who rounded Ballyroan Abbey keeper Paudie McDonald before dispatching to the net.

In a low scoring first half of football, Ballyroan Abbey led 2-3 to 2-1 at the interval. However, with how much possession St Joseph’s enjoyed, you would have expected the league champions to overturn that deficit in the second half.

St Joseph’s reduced that gap to the minimum upon the restart, as centre-forward Eoghan O’Flaherty fired over a fine score from distance. They almost had a third goal from the next possession as well.

They won the possession off the Ballyroan Abbey kick-out, with Jack Lacey quickly playing it into Matty Campion. His shot though was straight at Paudie McDonald, but St Joseph’s did get a score from the play thanks to an Eoghan O’Flaherty converted 45’.

Ballyroan Abbey were struggling to get anything going at the other, as they hadn’t scored in over twenty minutes of play. It took Padraig McMahon leaping up to catch a ball he had no right to win for them to finally grab a score, as Brian Whelan tapped over the free.

Ballyroan Abbey were dealt a big blow when their corner-back, Danny Brennan, was black carded after fouling a St Joseph’s player around the neck. O’Flaherty made no mistake with the free, as St Joseph’s were now on level terms and in the ascendency.

Danny Hickey continued that momentum, with the wing-forward kicking over a point to put St Joseph’s ahead for the first time since the opening few minutes of the match. Ballyroan Abbey replied though through Diarmuid Whelan, who was brought on only minutes earlier by manager Padraig Clancy.

Ballyroan Abbey regained the lead through the exceptional Padraig McMahon, as he got it onto his left before placing over the bar. However, St Joseph’s have a strong squad and utilised their bench to the fullest to finish this contest strongly.

O’Flaherty levelled matters once more through a placed ball, and then wing-back Tom Dunne put St Joseph’s back in front after his team worked a quick 45’.