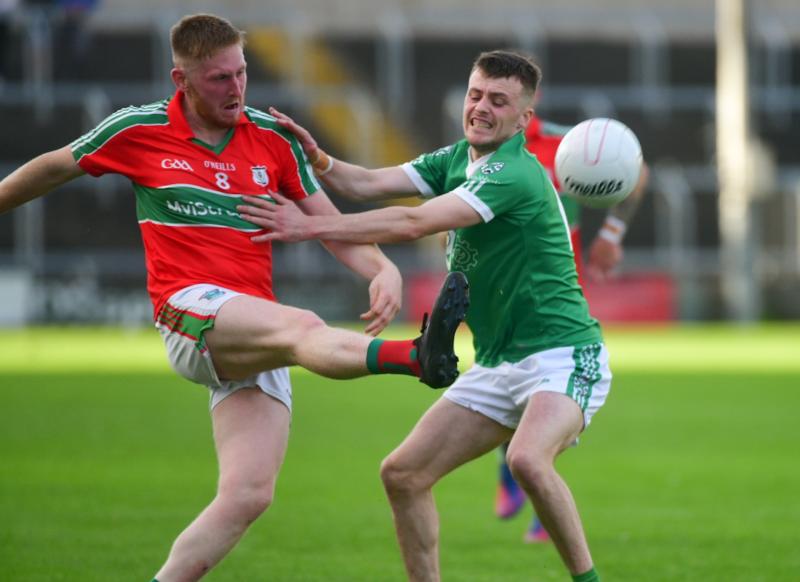 In another round two rematch, Graiguecullen and Stradbally met for the second year running in the final game of a Saturday triple-header in O’Moore Park. Graiguecullen had easily beaten Stradbally last season, so the 2016 champions were hoping to give a better account of themselves this time around.

However, despite an improved second-half display from the Stradbally men, Graiguecullen once more proved to be the better team. Brian Byrne was lethal on the day, as the Laois Senior footballer helped himself to 1-4 en route to victory.

Graiguecullen wasted no time in gaining a decent lead for themselves, as they played some fast and attacking football inside the first few minutes to leave Stradbally in their wake. Brian Byrne, who was brilliant on the day, opened the Carlow-border side’s account for the evening.

Benny Lawlor, who has been in terrific goal-scoring form throughout this season for Stradbally in both league and championship, opened their account for the game. Graiguecullen responded with their first goal of the game though.

Brian Byrne showcased his pace, as he cut in from out near the endline. Instead of panicking to try and get his shot away though, Byrne calmly rounded Jack Larkin before burying one into the back of the net.

Graiguecullen were firing on all cylinders, and their goalkeeper, Danny Bolger, charged up the field to float over a 45’. Benny Lawlor hit back with his second for Stradbally after strong running from Colm Begley set Lawlor up for the score.

Danny O’Reilly got on the scoresheet for Graiguecullen, as the Laois Senior footballer fisted over from close-range. Stradbally responded with two points on the trot to cut into that early deficit though, with Colm Begley and Garry Comerford (free) narrowing the gap.

Brian Byrne was proving unmarkable though despite Stradbally switching several different defenders onto him. Byrne cut in from the right-hand side to place over his third point of the half.

Graiguecullen finished the half strongly to take a deserved advantage at the break. While Colm Begley charged up to slot over his second score for Stradbally, Graiguecullen responded with Danny Aylesbury and Conor Kelly (free) points to lead 1-8 to 0-5 at half-time.

While Graiguecullen opened the scoring for the second half through centre-forward Lee Walker, Stradbally hit back with a sublime goal to put some life into this match.

The ball was played into Eoin Buggie, who had made his way up from the backs. It looked like he would just take his point, but Buggie unleashed a thunderbolt into the top right corner of the net to get Stradbally back into the match.

Stradbally supporters had found their voice now and urged on their team. The players responded, with further scores from Garry Comerford and Jody Dillon (free) cutting the gap back to just three points.

Graiguecullen were a bit all over the place at the start of the second half, and they needed their experienced heads to settle them down. No better man than former Laois senior footballer Mark Timmons to that, as he raised a massive white flag for them.

Stradbally’s bench was making an important impact, as the likes of Conor Buggie, Jack Langton and Cillian Maher were bringing a bit of pace and energy to their side. Conor Buggie grabbed his first score for Stradbally, as he sold his man a dummy before curling over.

However, Stradbally’s run was ended shortly after that, as Graiguecullen’s performance went up a level. Shane O’Neill, Mark Timmons and Brian Byrne all raised white flags for them to push them five clear at the half-way point in the second-half.

Garry Comerford replied with a free for Stradbally, but Graiguecullen struck for goal number two to all but put the game to bed. Brian Byrne ran inside before transferring it to Conor Kelly, and he unselfishly laid it off to Lee Walker for a simple palm home.

Stradbally grabbed their final two scores of the match through Jody Dillon and Garry Comerford (free), but it wasn’t enough as Graiguecullen booked their spot in the quarter-finals.