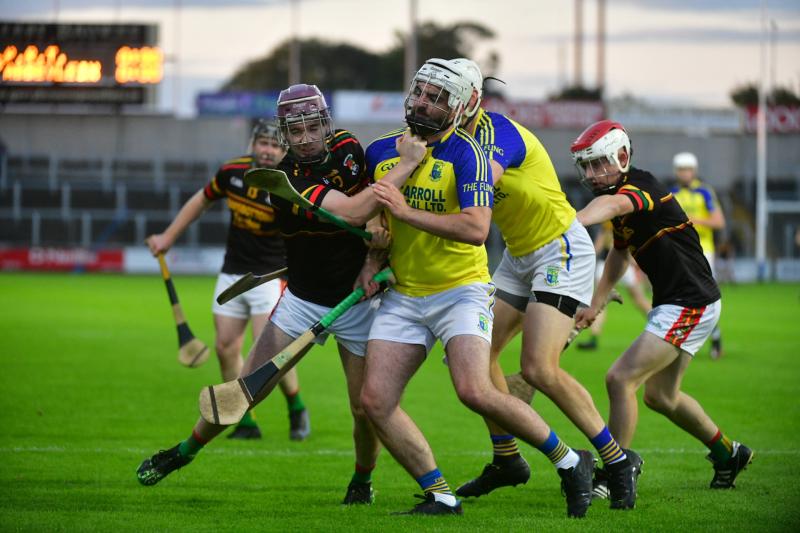 St Lazerian’s Abbeyleix won the Laois Junior Hurling Championship in front of a loud, energetic crowd at MW Hire O’Moore Park on Friday night, beating Park Ratheniska Timahoe by a scoreline of 1-16 to 0-12.

Conditions were perfect for the players to show off their skills and both sides took full advantage. Park Ratheniska Timahoe started well but St Lazerian’s Abbeyleix took control with four unanswered points in quick succession. It was a blistering, tit-for-tat first half that saw Abbeyleix take a two-point lead in at the break on a scoreline of 0-8 to 0-6.

In a carbon copy of the first half, P.R.T. started the second half the stronger, but again, Abbeyleix quickly took control with four unanswered points. That was where the similarities in the halves ended, however, as the second period was a far more cagey, physical affair. The tie was marred somewhat in stoppage time when a brawl led to both sides receiving a red and yellow card each.

In the end, the men in yellow and blue were that little bit better on the pitch, and that little bit louder in the stands as every P.R.T. wide was greeted with cheers as loud, or even louder than the Abbeyleix scores. Declan Phelan bagged a goal in the 51st minute that all but cemented the game for Abbeyleix, allowing Captain, David Walsh to lift the trophy.