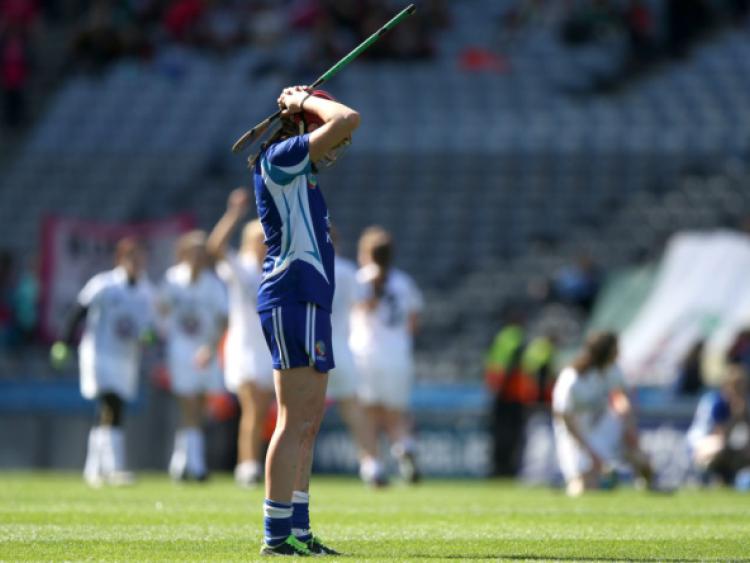 For the second time this year in a major final, Kildare full-forward Susie O’Carroll broke Laois hearts with devastating goals that settled the game in favour of the Lilywhites.

For the second time this year in a major final, Kildare full-forward Susie O’Carroll broke Laois hearts with devastating goals that settled the game in favour of the Lilywhites.

In utterly atrocious conditions in Croke Park, the flying full-forward found the back of the net twice in the space of two minutes early in the second-half to put her side into a commanding lead that they would hold until the end of the game.

The goals came at a crucial time as Laois had gotten back within one thanks to a goal from substitute Grace O’Neill straight after the break but the momentum they gained from that three pointer was short lived as O’Carroll instantly hit back with her brace.

It was a heart breaking defeat for a talented Laois side who travelled to Dublin full of confidence after going through the All Ireland series unbeaten, including a victory over Kildare in the first round.

On the day however everything conspired against Laois including the conditions which were more suited to the physically stronger Kildare side. Torrential rain fell throughout the game with only brief respites for the players and supporters alike and the gale force swirling wind in Croke Park compounded the difficult conditions taking away from the game as a spectacle.

Laois had scored freely throughout their All Ireland campaign but on Sunday they found it difficult to get into their stride as the bigger, stronger Kildare side imposed themselves on the game.

Laois never threw in the towel and battled bravely all the way to the final whistle but despite their best efforts, they couldn’t overcome the concession of the two goals early in the second-half as Kildare dropped back extra players after they got ahead to see out the win.

Kildare flew out of the blocks and had two points on the board inside the first minute with Siobhan Hurley opening the scoring after 14 seconds and Melissa Lyons adding the second with 49 seconds elapsed.

Susie O’Carroll slotted over her first point with seven minutes on the clock to put three between the sides but Laois almost hit back in spectacular fashion two minutes later. A long ball in from Sarah Ann Fitzgerald caused consternation close to the Kildare goal but after a scrum close to the goal, Kildare’s Jane O’Donoghue emerged with the ball and cleared her lines. That was a microcosm of Laois’ day as they had little or no luck and the ball rarely bounced their way.

Points from Roisin O’Connell and Siobhan Hurley from a free moved Kildare 0-5 to 0-0 ahead before Louise Mahony finally opened Laois’ account from a free with 24 minutes on the clock. Niamh Dollard added a second point for Laois soon after to reduce the gap to three before Susie O’Carroll rounded off the scoring for the half to leave Kildare four points ahead at the break.

Two minutes after the restart Laois were right back in the game when one of their rising young stars Grace O’Neill found the back of the net to leave just a point between the sides.

At this stage Laois needed to consolidate their position but with the rain teaming down, Kildare hit back in spectacular fashion with two goals in as many minutes from Susie O’Carroll with Laois goalkeeper Laura Dunne having no chance on either occasion as the full-forward was clean through on goals. Siobhan Hurley added a point and before Laois knew what hit them, they were eight points behind after having briefly closed the gap to one.

Laois continued to battle right to the end and they laid siege to the Kildare goal but they couldn’t create a clear cut goal scoring opportunity. Kildare dropped extra players back as the second-half progressed and the white wall they erected in front of goal proved to be impregnable.

Kildare almost scored a third goal on the break but Aishling Dunphy did brilliantlyto block a shot from Melissa Lyons when she threw herself in front of the ball.

In the end however all Laois’ brave efforts were for nought but they will have learned much from their trip to Croke Park and they will surley be back again soon given the quality in the side.