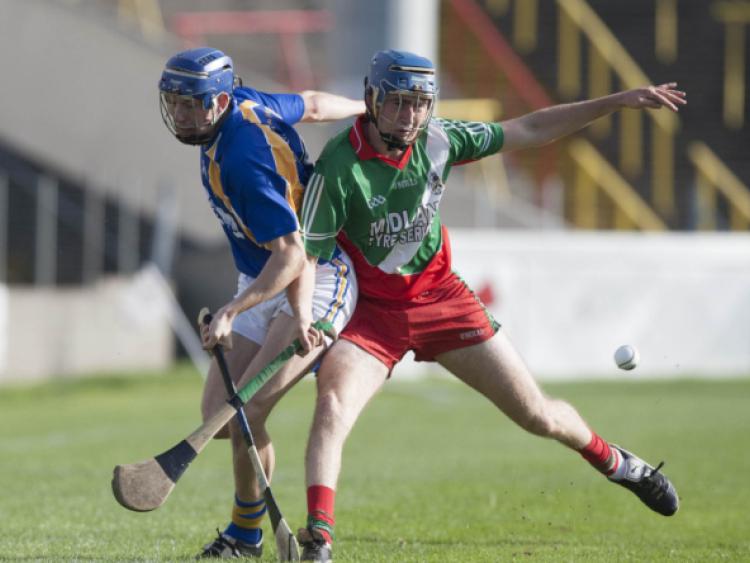 Borris Kilcotton booked their place in their first ever county final with a commanding win over last year’s beaten finalists Clough Ballacolla in O’Moore Park on Sunday evening.

Borris Kilcotton booked their place in their first ever county final with a commanding win over last year’s beaten finalists Clough Ballacolla in O’Moore Park on Sunday evening.

The men in green and red were clinical up front and thrifty in defence building up an eight point advantage at the interval. A PJ Scully goal seven minutes into the second half sealed their place in this year’s decider.

Clough Ballacolla did gain some foothold on proceedings in the second period but Borris-Kilcotton, spurred on by boisterous supporters, were determined to be part of Laois Senior Hurling’s big day and ran out deserving winners on a scoreline of 1-16 to 0-11.

Matthew Whelan pointed from a free inside the first minute to get Borris-Kilcotton up and running. Further scores from Brian Stapleton and midfielder Kevin Finlay gave the green and reds an early three point lead.

Ten minutes were on the clock before Clough Ballacolla opened their account with Willie Dunphy flashing over from under the stand; this would be one of only two scores his side would manage in the first half.

Patrick Whelan slotted over the first of four answered points for Borris-Kilcotton in the fourteenth minute.

Clough Ballacolla’s Stephen Maher fired over a twenty fifty minute free to stop the rot, but Borris-Kilcotton were in no mood for taking their foot off the scoring pedal. Paul Drennan and PJ Scully raised white flags as the first half drew to a close and saw their side go to the break eight points to the good 0-10 to 0-2.

Ciaran Comerford registered his third with another placed ball inside the first minute of the second half. PJ Scully was now starting to find his range and he fired over for Borris Kilcotton a minute later to open up a ten point lead.

Stephan Maher and Brendan McEvoy responded for Clough Ballacolla in the thirty third and thirty fourth minutes, but any thoughts of a comeback were quickly put to bed three minutes later when Scully had the ball in the back of the 2011 champions net.

The young attacker found Ciaran Comerford on the twenty yard line who took on the defence and allowed Scully to create the overlap and make no mistake from fifteen yards.

To Clough Ballacolla’s credit they responded by scoring the next two points through Maher and Tom Delaney.

They followed this with two more unanswered scores, an excellent solo effort from Jim Doyle and a neat thirty yard effort from John A Delaney to leave the scoreboard reading 1-13 to 0-9 entering the final quarter.

The sides exchanged scores in the fifty and fifty second minutes, a Mathew Whelan ‘65 followed by an excellent individual score from Clough Ballacolla’s John Delaney to maintain a seven point gap as the game entered the final five minutes.

Another free from Comerford followed by a classy thirty yard effort from Scully brought an end to proceedings, meaning for the first time in three years Clough Ballacolla won’t feature in the senior hurling showdown.

This was a comprehensive win for Borris Kilcotton whose desire to reach the final was apparent from the throw in; dominant in all areas of the pitch Clough Ballacolla can have no complaints losing out on a final scoreline of 1-16 to 0-11.

It doesn’t get any easier for Borris-Kilcotton, however, with Camross up next.