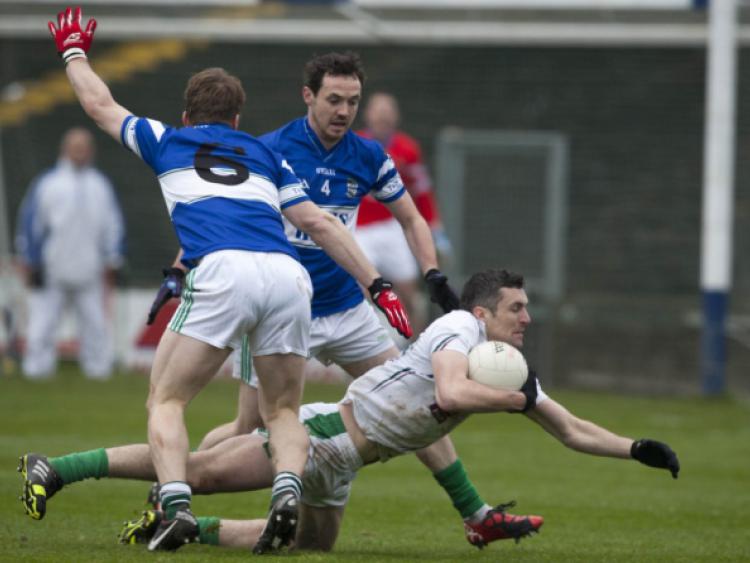 Despite the fact that his side trailed by two points at half-time and had struggled to contain Moorefield for a lengthy period in the opening period, Portlaoise joint manager Mark Kavanagh never doubted his side would win the game.

Despite the fact that his side trailed by two points at half-time and had struggled to contain Moorefield for a lengthy period in the opening period, Portlaoise joint manager Mark Kavanagh never doubted his side would win the game.

The Laois champions were by far the better side in the second-half and Kavanagh felt they should have been more than four points ahead at the final whistle.

“We said to the lads in the dressing room, if you control the ball, you control the game. There was no doubt in our mind at half-time that we were going to win it. And I thought maybe we could have won by more. We had two goal chances where we tried to walk the ball into the net. In fairness to the lads that’s what we’ve been practising for the last couple of years and maybe they just overdid it a small bit today. All in all there was no doubt in my head at half-time that we were going to win this match.”

The joint manager felt Portlaoise should have gotten more from the first-half but he acknowledged that the concession of scoreable frees had proved costly and was something they rectified in the second-half.

“I thought we were unlucky in the first-half in so far as we went in two points down. The opening ten minutes was brilliant in what we did and the way we played football and the intensity we showed all over the field. We were probably a bit rushed in some of our tackling maybe and they ended up getting six points from frees.

“Things don’t normally happen in games because you play them second by second. There was a ten minute period there in the first-half where we lost the run of ourselves. I think we shored things up. We moved Kieran Lillis to centre-back and I think he did well there. We brought Barry Fitzgerald in and he gave us an extra threat up front and all in all things started to move well and that lead us into the second-half.”

Kavanagh praised the contribution of a number of players including young players Eoin Whelan and David Seale and captain Brian McCormack but he reserved the highest praise for full-back Cahir Healy.

“Cahir Healy was absolutely outstanding. He’s a leader in the dressing room. He’s a leader among the lads. He’s coming back from England for the last three weekends now. Himself and Brian Glynn, I don’t know how they do it. Years ago I used to do it myself and it wears thin on the body and on the mind. But Cahir Healy was outstanding today. He’s one of the most honest footballers I’ve ever come across. He’d tell you he’s going to do it and then he goes out and he does it.”