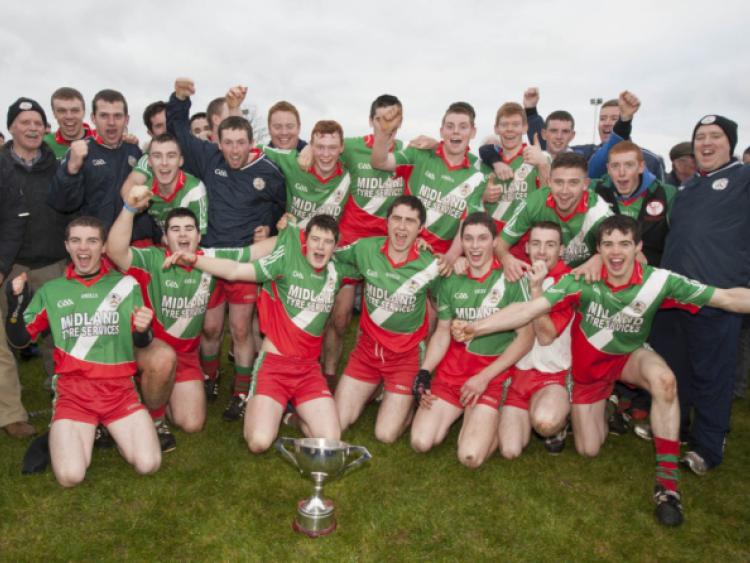 The large crowd that gathered in Colt on Sunday afternoon to witness the Laois U-21 hurling final were certainly given value for money as they enjoyed a four goal, thirty-three point thriller.

The large crowd that gathered in Colt on Sunday afternoon to witness the Laois U-21 hurling final were certainly given value for money as they enjoyed a four goal, thirty-three point thriller.

Despite the numerical disadvantage for the majority, Borris-Kilcotton just shaded the game to emerge with three points to spare to claim the title after an exhilirating game.

Clough-Ballacolla opened the scoring with a bare minute on the clock when centre-forward, Willie Dunphy, sent over a sideline cut from forty-five metres to set the ball rolling. Dunphy didn’t waste long putting his stamp on the game as he slotted a point from the resulting puck-out to ease Ballacolla into an early two point lead.

Borris-Kilcotton hit-back with a brace of points from PJ Scully, while Clough-Ballacolla sandwiched a Picky Maher free in-between to leave the score at three points to two in favor of Clough-Ballacolla with six minutes played.

With eight minutes elapsed, what looked as though it could be the deciding factor in the game occurred - Eoin Quinlan’s straight red card for a late, wild pull. Being reduced to fourteen men in what was already considered to be a bitterly close contest, looked to have paved the way for fifty-two remaining minutes of Clough-Ballacolla domination. But that wasn’t to be the case.

Clough-Ballacolla deployed their free man in a sweeper role on their full-back-line, while Borris-Kilcotton continued to threaten from range as they went on to slot the next six points without reply - despite the numerical disadvantage. Like he had done in the semi-final victory over Portlaoise, PJ Scully ran the show for Borris-Kilcotton as he fired the six points, bringing his tally to nine for the day.

Clough-Ballacolla eventually began to make use of their spare man in the final seven minutes of the half as they outscored Borris-Kilcotton by four points to two with the Ballacolla points coming from Picky Maher (2), Willie Dunphy and Aidan Corby, while Scully popped over his tenth of the day and half and John Wall pointed his first of the day as Borris-Kilcotton held a four point lead at the interval.

Clough-Ballacolla carried their form from the late stages of the first half into the second as they claimed the opening two points of the new half with brothers Sean and Aidan Corby raising the white flag.

Borris-Kilcotton quickly settled into the half and went on to claim 1-2 in the next three minutes. PJ Scully converted a free, before Daire Quinlan fired low and hard across the face of goal to raise the green flag. John Wall completed a devastating three minutes with a point to see Borris lead by seven.

The sides went on to trade points at a blistering pace with Borris-Kilcotton still edging it five points to three following points from Scully (2), John Wall and Paddy Whelan, while Picky Maher fired a brace and Willie Dunphy notched a point approaching the final ten minutes of the game.

Clough-Ballacolla went all-out in the final ten minutes and racked up 1-2, with Willie Dunphy grabbing 1-1 and Picky Maher a free to close the gap to four points with five minutes remaining.

Borris-Kilcotton grabbed what looked to be the insurance goal two minutes from time with Daire Quinlan bagging his second of the day, but their was still time for drama as Willie Dunphy hadn’t given up hope and fired 1-1 in injury-time to leave just three points separating the sides. But that was to be as close as they would come as Borris-Kilcotton claimed the U-21 title.