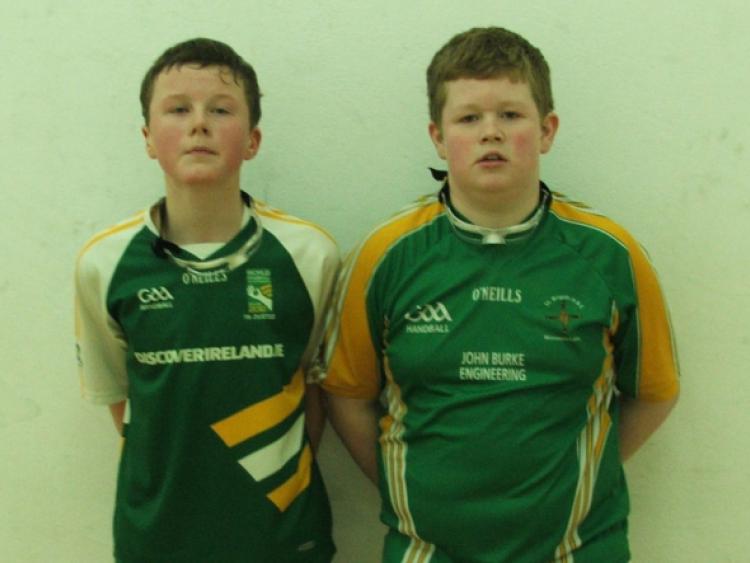 Last weekend, Cullohill Handball Club hosted the finals of the Laois Boys’ 40x20 handball championships. This proved to be an action-packed day full of tension, exciting handball with a number of hard fought and closely contested encounters.

Last weekend, Cullohill Handball Club hosted the finals of the Laois Boys’ 40x20 handball championships. This proved to be an action-packed day full of tension, exciting handball with a number of hard fought and closely contested encounters.

For those in attendance, there was a general consensus that the skill levels and standard of handball on show was the highest in recent years.

After the weekend’s action, the final saw Monavea’s Ciaran Burke face Tiernach Doheny of Cullohill in what turned out to be a see-saw battle between two very talented and committed handballers. In the first game the lead changed hands several times before Ciaran edged it on a scoreline of 15-12.

Tiernach did not let the disappointment of losing a close first game affect his performance and came back strongly to edge the second game 15-13 bringing the final to a third game decider. Remarkably, the deciding game proved every bit as gripping as the previous two games that had preceded it with the outcome of the encounter in the balance right until its dramatic conclusion. In the end, victory went to Ciaran Burke who took the last game 15-12 but huge credit must be given to Tiernach Doheny who pushed him all the way in one of the most exciting county finals ever played in any age-group.

The Boys U-13 championships had five participants with Cullohill represented by Billy McEvoy, Mark Deegan, Padraig Walsh and Thomas Walsh with Monavea’s sole representative at this grade being Matt Kelly. In the semi-finals, Billy McEvoy proved too strong for Padraig Walsh while Matt Kelly was victorious in his game against Thomas Walsh. The final saw Matt Kelly give a very accomplished performance to defeat Billy 15-1 15-6 and add the U-13 county title to his U-12 success of the previous year.

After a very competitive round-robin tournament in the Boys U-16 championship between Tommy White and Barry Deegan of Cullohill and Killian O’Shea of Monavea, it was Tommy and Barry who progressed to the final. Barry was to make the better start to the final playing some outstanding handball to take the first game 21-15. Tommy was not fazed by his opponent’s fast start and responded with some impressive shots of his own to take the second game 21-12.

The third game between the two boys proved to be a thriller with each ace keenly fought. Eventually, after some exciting rallies it was Tommy who was to claim the U-16 county title edging it on a scoreline of 15-21 21-12 21-18.

With the Boys U-14 championship postponed, this final brought an exciting day’s action to a close and hopes must be high that Laois juvenile handballers can build on last year’s success and capture more titles in the Leinster championships that start later this month.