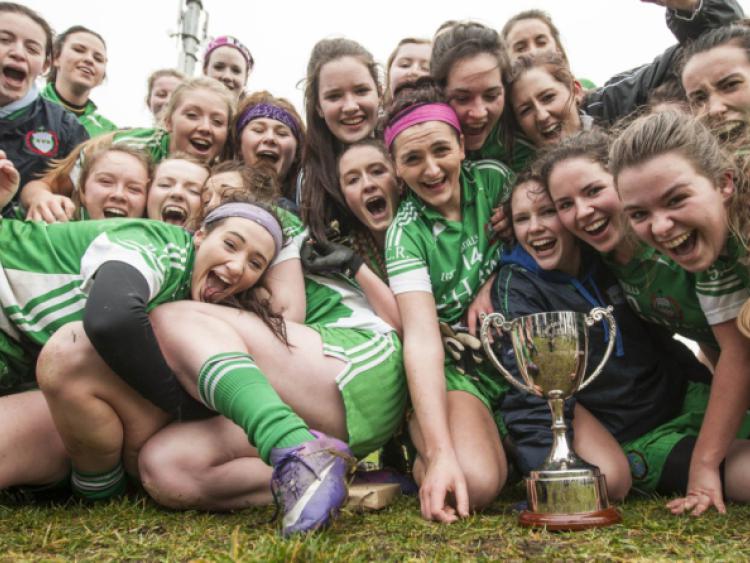 A ruthless display of attacking efficiency from Scoil Chríost Rí secured them back to back Leinster titles in Eire Óg last Wednesday afternoon.

A ruthless display of attacking efficiency from Scoil Chríost Rí secured them back to back Leinster titles in Eire Óg last Wednesday afternoon.

Having won the Leinster ‘C’ title last year, the Chríost Rí juggernaut shows no signs of slowing down just yet as they had far too much for St Mary’s of New Ross here.

Anna Fitzgibbon had the ball in the back of the net after just 13 seconds, and that set the tone for what was to come, as the Portlaoise school flooded forward time and again as they overwhelmed the St Mary’s defence.

Driven on by the excellent Fiona Dooley at midfield, and with Aine Fitzpatrick in free-scoring form at full-forward, there only ever looked one winner. After Fitzgibbon’s early goal, two points quickly followed from Aine Fitzpatrick, one from a free, before the same player then struck for her first goal as New Ross could barely draw breath after the early barrage.

To their credit, they did manage to strike back, with full-forward Joanne Dillon hitting the first of her three goals in the sixth minute, but it was only a brief respite.

Aine Fitzpatrick added two more either side of a Fiona Dooley point as the gulf between the teams kept was made more apparent. Erone Fitzpatrick, playing senior for the school despite only being a first year, also struck for a point, before Rachel Cross rounded off a fine team move with a neat finish to the net.

Cross then saw another effort for goal just tipped over the bar, but Chríost Rí didn’t have to wait much longer for more goals. Caoimhe Lalor’s speculative effort was misjudged by Breda Cummins for their fourth goal, and then Aine Fitzpatrick got her second after a pass from Erone Fitzpatrick.

A late New Ross goal, from Joanne Dillon, was some consolation, but they still trailed 5-8 to 2-1 at half time.

Chríost Rí had wind advantage in the second half, and the impressive Fiona Dooley got them up and running for the second half with two points, and further goals from Ailbhe Lalor and Orla Carroll kept them well clear as they cruised to a fully deserved 25 point win to secure a Leinster title.