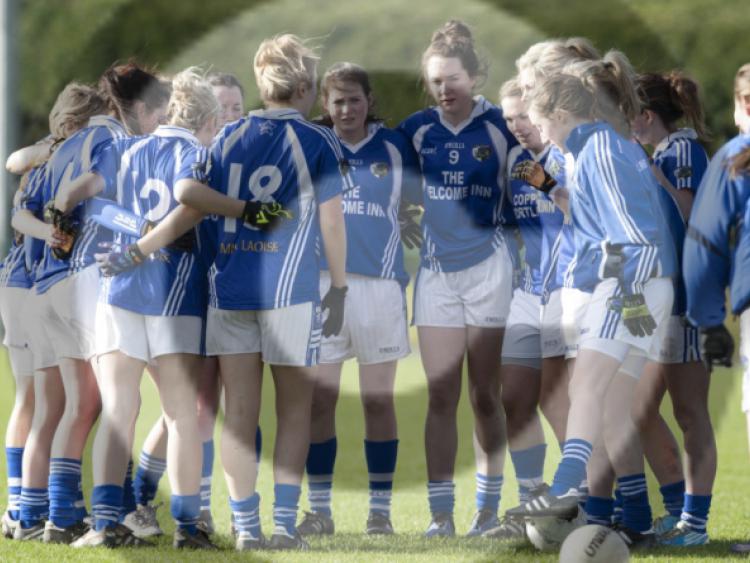 On the same day that the Laois Senior footballers lost out to Jim McGuinness’ Donegal by thirteen points in O’Moore Park, the Laois Ladies flourished against their Donegal opposition in Crettyard as they ran out comfortable ten point victors to give them, and new manager Des Cooney, an ideal start to their National League campaign.

On the same day that the Laois Senior footballers lost out to Jim McGuinness’ Donegal by thirteen points in O’Moore Park, the Laois Ladies flourished against their Donegal opposition in Crettyard as they ran out comfortable ten point victors to give them, and new manager Des Cooney, an ideal start to their National League campaign.

With other National League games falling victim to the weather, Crettyard held its own to see the Laois Ladies rack up a huge scoreline of 2-18, with full-forward Noirin Kirwan notching 1-9 while Donegal’s Elish Ward fired 2-4 of her side’s 3-5.

New Laois manager Des Cooney came into this - his first competitive game in charge of the Laois Ladies - looking to put some early points on the League table, and he certainly did that. Despite it being early in the footballing year, his Laois Ladies side showed no ill signs of rustiness or nerves as they comfortably brushed aside the Donegal challenge with ten points to spare.

From the throw-in, Donegal went straight on the attack with Karen Feeney forcing an excellent save from Caoimhe Dollard in the Laois goals. Laois settled after their opening minute scare and went on to dominate the next fifteen minutes as they chalked up five points without reply.

Donegal finally opened their account after sixteen minutes when Elish Ward split t the posts, but Donegal weren’t given a chance to build on any momentum as Laois replied almost instantly with Noirin Kirwan raising the green flag from the penalty spot to see Laois ease into a seven point cushion.

Donegal registered their second point three minutes later with Ward grabbing her second of the afternoon, while Laois replied with a point apiece from Martina Dunne and Maggie Murphy extending the Laois lead to eight points.

Donegal claimed a life-line right on the brink of half time when Elish Ward split the Laois defence before rattling the net for her first goal of the day. Laois replied in injury time with Noirin Kirwan adding a point to see Laois lead by six points on a scoreline of 1-8 to 1-2.

Donegal started the second half as they intended to go on with Karen Feeney and Elish Ward adding points as Donegal began to put their stamp on the game. Donegal’s impressive opening to the second half was quickly pushed aside when Martha Kirwan weaved her way through the Donegal defence before laying the ball off to substitute Laura Marie Maher who made no mistake with the finish to raise the green flag once again.

Ward exchanged points with Maggie Murphy, before Laois took off on a twelve minute, six point scoring spree - with Noirin Kirwan on hand to slot all six in quick succession as Laois stormed into a deserved thirteen point lead with five minutes left to play.

Donegal kept fighting until the last minute as broke the Laois defence for the third time, with Rachel McGee rifling the ball past Caoimhe Dollard and into the roof of the net to leave ten points separating the sides at the final whistle.