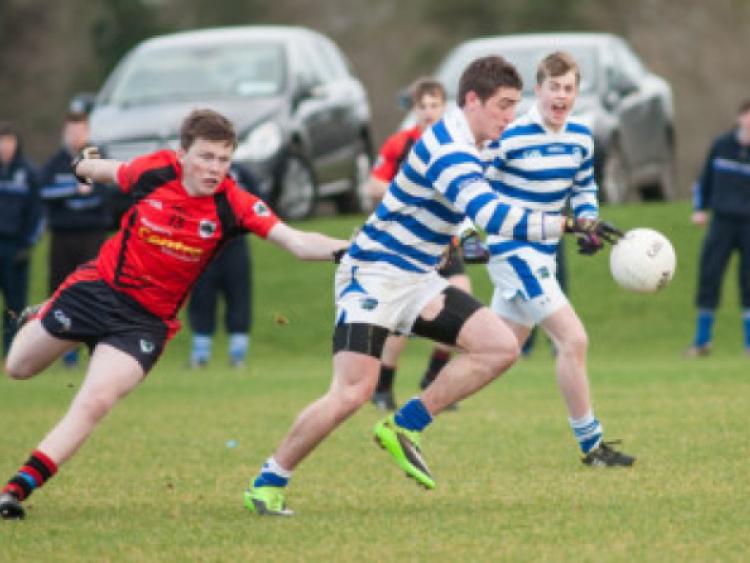 A stunning second half performance from Knockbeg College saw them knock out a fancied St Mary’s Edenderry side in this Leinster College SFC ‘A’ clash in Fenagh.

A stunning second half performance from Knockbeg College saw them knock out a fancied St Mary’s Edenderry side in this Leinster College SFC ‘A’ clash in Fenagh.

Playing with the aid of a very strong wind in the first half, Knockbeg looked to be really struggling in the opening 30 minutes. They trailed by one point at the break, having failed to score until the 28th minute, and faced the prospect of playing into the elements in the second half.

All signs pointed to Edenderry pulling away in the second half, and two early points after the restart seemed to be the beginning of the end for Knockbeg.

But then, almost from nowhere, corner-back Mark Rennick found himself 12 yards out, and he fired low past Ken Brereton to give his side a massive lift. Confidence began to course through the Knockbeg team and, with Edenderry looking more and more nervous as the seconds ticked away.

Nowhere were those nerves more apparent than in their full-back line, with panic spreading like wildfire every time Knockbeg launched an aerial bombardment. They reaped their rewards from that, and now they can look forward to the third round, with the draw set to take place last night (Monday)

The only action of note in the first ten minutes was when Edenderry midfielder David Maloney rattled the crossbar from close range, following a fumble from Daniel Bolger. The first score was not registered until the 12th minute, as St Mary’s corner-forward Alex Kenny pointed a free.

Kenny was the most prominent threat from Edenderry throughout that first half, and he followed up from the free with a wonderful point from the right wing moments later. The strength of the wind made it hard for Knockbeg to play the ball forward, but they would still have been disappointed at having to wait until the 28th minute to open their account, as Cathal Dunne fisted over a free from Ethan O’Neill.

David McDermott added their second moments later to level the game, but Edenderry would lead at the break as Kenny scored another fine point to leave it 0-3 to 0-2 at the break.

When Edenderry came out strongly at the start of the second half, things were looking bleak for Knockbeg.

Again it was Alex Kenny causing them problems, as he pointed twice in three minutes to open up a three point lead, but Knockbeg would soon turn the game upside down.

A fine team move ended with Mark Rennick popping up in the right place at the right time to score a crucial goal. That score gave Knockbeg an instant lift, and centre-forward Cathal Dunne tapped over a point a minute later before he then struck for a goal.

Aaron McGrath launched a ball in from the left wing, and Dunne claimed possession before firing to the net from close range to gave Knockbeg a four point lead.

Edenderry were shellshocked by the Knockbeg barrage, but recovered their compoure to hit the next two points and halve the deficit.

Undaunted, Knockbeg responded with another point from Dunne, before he then launched a ball into the full-forward line, which Cormac Murphy won and duly dispatched to the net.

After that, it was just about seeing the game out for Knockbeg, and they soaked up the Edenderry pressure but, crucially, never gave them a goal chance in the final minutes as they held on to win by two points.