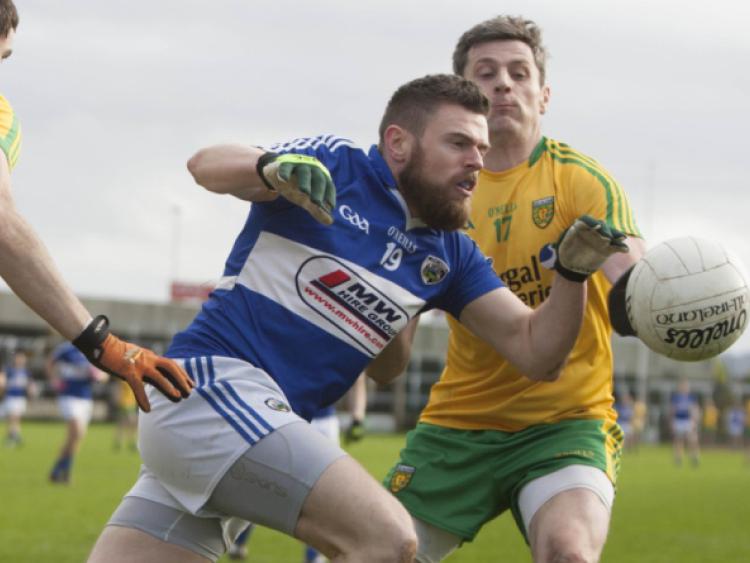 Laois’ NFL Division 2 campaign got off to the worst possible start on Sunday afternoon, as they lost by 13 points to Donegal in O’Moore Park.

Laois’ NFL Division 2 campaign got off to the worst possible start on Sunday afternoon, as they lost by 13 points to Donegal in O’Moore Park.

The 2012 All-Ireland champions were far too strong for a Laois team which didn’t look ready to tackle a team this well-drilled. Darren Strong, Padraig McMahon, Kevin Meaney and Ross Munnelly were making their first appearances of the year, while Graham Brody and Adam Ryan were lining out in the league for the first time.

That showed on the field, as Donegal fell into a rhythm quickly, while Laois were laboured, and over-played the ball time and again. With Donegal dropping men back, Laois’ attempts to run the ball forward were repeatedly thwarted, frustratingly so in the first half when they had wind advantage but were too hesitant to hit the full-forward line.

Manager Tomás O Flatharta admitted afterwards he was disappointed his team didn’t try to vary their game plan in the first half, but he has little time to rectify it. Next up is a trip to Drogheda to take on Louth this coming Sunday, and that doesn’t give Laois much time to bring players up to speed or do much work on the training ground.

A good week’s training might sort out some of the problems, but one area Laois can do nothing about is experience, and right now, this is a very inexperienced panel. Nine of the 26 players listed in the match programme were lining out in the league for the first time, and that is the reality for Laois at the moment.

This is a young team, and it may not be the last result like this that the county experiences in this league campaign.

The early signs weren’t too bad, however, as both teams pointed in the opening four minutes. Michael Murphy pointed a free with a little over a minute gone, and Donie Kingston responded in kind soon after.

Kingston had another chance moments later from a little further out, also from a free, but saw his effort trail to the right. He then turned provider, as he launched a ball towards Evan O’Carroll, who did superbly to hold off Neil McGee and then round Paul Durcan, but under pressure his shot went a little too high and dropped over the bar.

Donegal would show the clinical touch Laois lacked four minutes later, as a sweeping team move resulted in Anthony Thompson leaving Odhrán MacNiallais with a simple tap in to score their first goal.

A late point from Michael Murphy then left four between the teams at the break, and with Donegal having wind advantage in the second half, things looked ominous.

Donegal wasted little time in taking advantage of having the elements in their favour, and with a little over a minute gone they had struck for their second goal. Colm McFadden provided it, as he got away from Denis Booth and thumped a swerving shot to the top corner.

Michael Murphy floated over a 45 five minutes later and then whatever lingering hopes Laois had of getting something from he game were wiped out. As Donegal came forward yet again, Denis Booth caught Mark McHugh with a high tackle and was given a straight red card.

From that point on, it was only a matter of how much Donegal were going to win by, and unfortunately for Laois the estimated kept having to be revised upwards.

They had gone 15 ahead when Laois finally opened their account for the second half, courtesy of the Ross Munnelly free, but Mark McHugh quickly cancelled that out with a well-worked point.

Laois kept working to get scores, with John O’Loughlin putting in a huge effort. He set up David Conway for a nice score, before he then got the score his work rate deserved when he thumped a shot to the net after being set up by Stephen Attride.

The last two scores went to Laois, but it they were only adding gloss to the scoreline at that stage, as Donegal ran out deserving thirteen point winners.