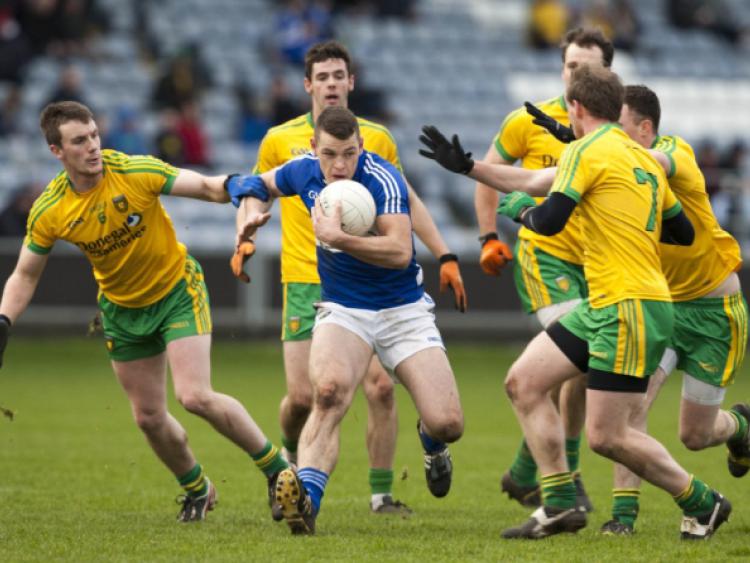 Laois senior footballers were given a rude awakening to life in Division 2 of the NFL this year, as Donegal doled out a 13 point defeat in O’Moore Park on Sunday afternoon.

Laois senior footballers were given a rude awakening to life in Division 2 of the NFL this year, as Donegal doled out a 13 point defeat in O’Moore Park on Sunday afternoon.

Laois were missing five of the side that played against Donegal last July, and with four of the starting team having played little or no football in 2014 prior to Sunday’s game, it all amounted to a stroll to victory for Jim McGuinness’ impressive side.

Trailing by four points at half time having played with the wind, Laois were always in trouble, and Colm McFadden’s goal seconds after the restart, coupled with Denis Booth’s red card, sealed Laois’ fate.

Speaking after the game, manager Tomás O Flatharta admitted Donegal were just too good for his side. “They’re a big, strong physical team who are very committed and have a great understanding of each other and the way that they play. We came up against that today, and unfortunately they gave us a right drilling.”

Laois’ limited resources will be stretched even further this coming Sunday, as Booth will now be missing, while it’s unlikely any of the injured players will be back in the fold.

It’s a difficult situation for all involved, but O Flatharta said Laois would just have to soldier on. “We have to get on with it, that’s reality, sport can be cruel at times, we have to get together again and prepare for next weekend.”

Elsewhere over the weekend, Laois Ladies had an altogether more enjoyable outing against Donegal when they cruised to a 2-18 to 3-5 win over the norther side in Crettyard on Sunday afternoon, to give new manager Des Cooney the perfect start.