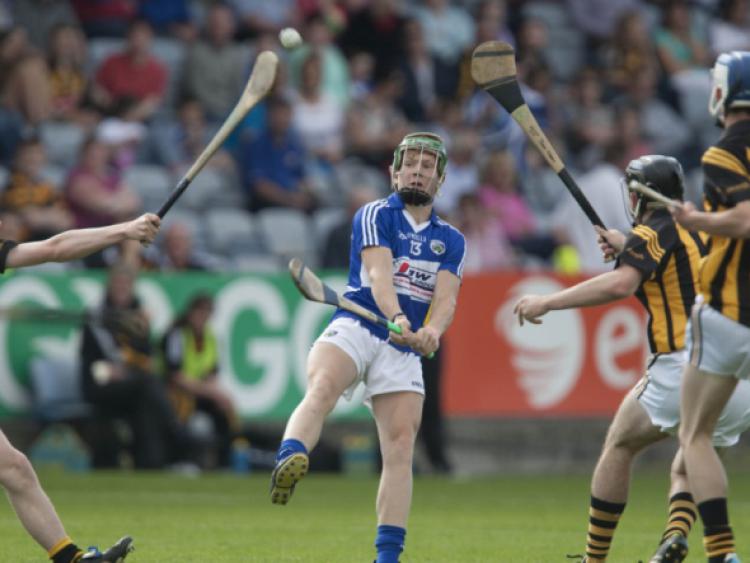 For the second year in a row, Kilkenny brought the curtain down on Laois’ involvement in the Leinster MHC, as they claimed an eight point win in O’Moore Park on Saturday night.

For the second year in a row, Kilkenny brought the curtain down on Laois’ involvement in the Leinster MHC, as they claimed an eight point win in O’Moore Park on Saturday night.

Having beaten Laois twice in last year’s Leinster championship, hopes were high around the county that Laois would eventually end Kilkenny’s strangehold over them.

Coming off the back of an impressive win over Offaly, Laois were as well prepared as they could be, but they just came up against a ruthless and well-drilled Kilkenny side.

Any time Laois tried to get close or build up some momentum, Kilkenny would halt them in their tracks, coming up with a score or winning a free to keep Laois at arms length.

In truth, it was a funny kind of game. You never got the impression that either side was really firing on all cyclinders for any concerted period. Laois played some nice hurling in phases, but found it hard to reach a peak and maintain it, although Kilkenny deserve credit on that count.

In Alan Murphy and Liam Blanchfield they had two fine young hurlers, with Murphy deadly accurate from frees, and Blanchfield running the Laois defence ragged over the course of the hour.

Laois couldn’t be faulted for effort, and they did work some nice scores, but they just weren’t strong enough overall. With roughly 20 of this panel underage again next year, including players like Liam O’Connell and Mark Kavanagh, it could mean that the best of this group of players isn’t seen until next year.

Pat Critchley spoke after the game about continuing to bang on the door until Laois knock it down, and that really is the next step. Whether that crucial win comes at minor or senior level probably doesn’t matter, as the boost it would give hurling the county would filter throughout all grades.

Unfortunately the minors couldn’t provide that win this year, but they will get their chance in 2015, while the senior hurlers will hope to do it later this year.

Laois had actually started brightly and took an early lead, as two frees from Mark Kavanagh cancelled out Luke Scanlon’s opener for Kilkenny. Scanlon, and his midfield partner Conor Browne, would play a big part in helping Kilkenny settle into the game, as both of them hit two points apiece in the opening ten minutes to eventually see Kilkenny overturn Laois’ advantage.

They went 0-5 to 0-2 up by that ten minute mark, with Liam Blanchfield stretching the lead further with a fine individual effort. Andrew Mortimer pulled one back for Laois, but it was a case of one step forward, two steps back, asKilkenny hit back with two points to lead by four.

It was much the same for the rest of the half, as Laois would work a nice score, only to see Kilkenny hit back with two or three in reply. Aaron Dunphy pointed from 45 yards for Laois, but Kilkenny soon had a double-score lead at 0-10 to 0-5 with 20 minutes gone.

They pushed that out to six points soon after, and it looked like it was going to be one of those days for Laois. Another point for each team maintained the status quo until Laois managed to hit back to back points before half time.

Robbie Phelan got the first when he won a break 30 yards out and fired it over the bar, with Andrew Mortimer adding another seconds later with a wonderful effort from way out on the right wing.

That sent Laois to the dressing room in a buoyant mood, as they were only four behind, 0-13 to 0-9, without really playing in top gear.

They soon whittled that lead down to two points on the restart thanks to two Mark Kavanagh points, and it really was a case of ‘game on’ now. With their lead under threat, Kilkenny did what all Kilkenny teams do - they hit back.

Working the ball down the field, Alan Murphy won possession 20 yards out and fired a precise shot to the bottom corner of the Laois net to record a crucial score.

Undeterred, Laois hit back with two more points from Mark Kavanagh, and also saw a goal effort from Robbie Phelan denied. That left the goal in it, and Loais kept themselves in striking distance by trailing by just that goal until the final ten minutes, when Kilkenny finally pulled away.

John Walsh pointed for them and then Alan Murphy pointed two frees to stretch the lead to six, and there would be no fairytale end for Laois after that, as subsitute Jack Keoghan and Murphy once more put the final nails in the Laois coffin to see Kilkenny record an eight point victory.