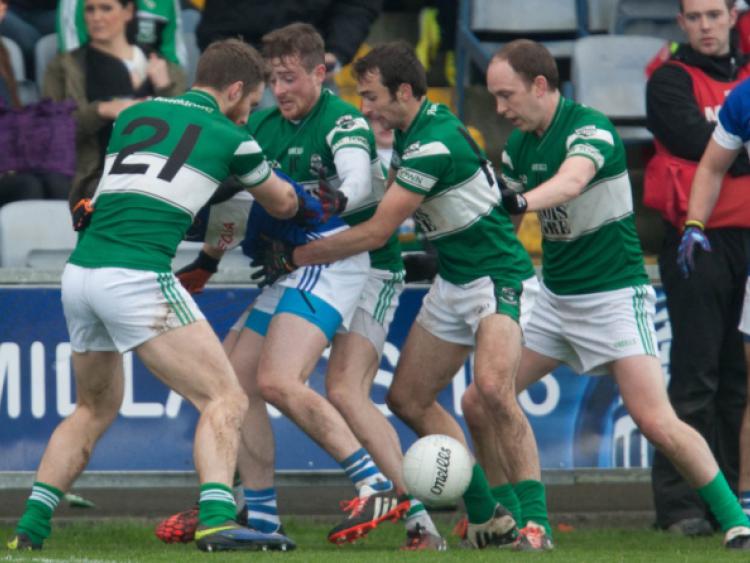 Portlaoise’s hopes of provincial glory were once again ended by a team from Dublin, as St Vincent’s ran out deserving ten point winners in O’Moore Park on Sunday.

Portlaoise’s hopes of provincial glory were once again ended by a team from Dublin, as St Vincent’s ran out deserving ten point winners in O’Moore Park on Sunday.

The reigning All-Ireland champions were expected to emerge victorious, but after a pulsating meeting between the teams last year, such a lob-sided scoreline was not foreseen.

In truth, it could have been worse, as St Vincent’s carved Portlaoise open with alarming ease in the opening ten minutes, with the biggest surprise being they only managed 1-2 for all their efforts.

At that stage it looked like they were going to run away with it, but Portlaoise knuckled down, and had gotten the gap back to a point by half time.

The momentum they were building was interrupted by the half-time break, and St Vincent’s emerged in ruthless fashion to finish out the game.

Two goals from Shane Carthy and points from Mossy Quinn opened up a gap that Portlaoise would not be able to bridge. Indeed, such was the St Vincent’s dominance in the second half, Portlaoise failed to score from play, managing just four points against a well-drilled defence.

If there is any consolation in defeat for Portlaoise, it may be that they were beaten by back-to-back All-Ireland champions, as it will take an excellent team to dethrone them. They were superb in spells of this game, but they were particualrly impressive at midfield, where they completely dominated Portlaoise.

They started superbly too, with Diarmuid Connolly and Mossy Quinn causing havoc. They combined with a one-two from a quickly taken free to allow Quinn open the scoring with a point, before a powerful run from Connolly resulted in him tapping over the bar.

Two minutes later, Connolly was on the run again, as he drew out Michael Nolan before passing to Mossy Quinn, and he tapped to the net from a yard out.

Two more goal chances, for Quinn and Ruairí Treanor were spurned, as Portlaoise finally got on the scoreboard thanks to a brace of points from Paul Cahillane.

Treanor responded for St Vincent’s with a point after good work from Gavin Burke, but Portlaoise hit back with a point from Zach Tuohy and a free from Paul Cahillane. The gap was narrowing all the time, and even when Shane Carthy pointed for St Vincent’s, Portlaoise responded with two more before half time. Craig Rogers and Brian McCormack provided them to leave one in it at the break, 1-4 to 0-6, with the game delicately poised.

The second half started in much the same way that the first half did - with St Vincent’s in control. This time, however, they would not be so profligate.

A lovely move saw them storm down the field and resulted in Mossy Quinn setting up Shane Carthy, and he finished low past Michael Nolan. Quinn added a free and Carthy a point from play to open up a six point lead for the Dublin side, with Craig Rogers trying to keep Portlaoise in the game with a free.

The real hammer-blow came next, however. As a long ball dropped on the edge of the Portlaoise penalty area, Michael Nolan was forced to come out and contest it. Unfortunately for him, the breaking ball dropped to Shane Carthy, and he finished to an empty net.

From there to end, it was only really a matter of how much St Vincent’s would win by, as they controlled the game superbly, scoring points when they needed them to seal a deserved win.