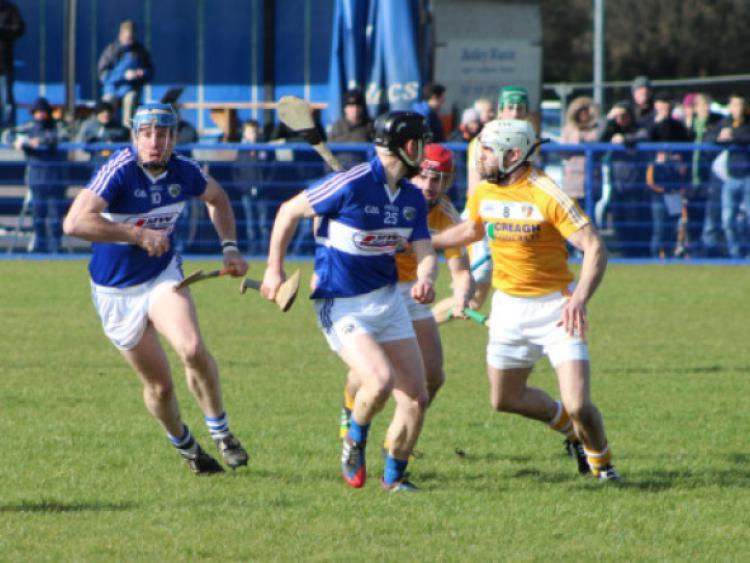 Laois claimed the first win of their 2015 Division 1B campaign thanks to an excellent second half effort against Antrim in Armoy on Sunday.

Laois claimed the first win of their 2015 Division 1B campaign thanks to an excellent second half effort against Antrim in Armoy on Sunday.

Facing into a strong wind and with Antrim hitting the first three points of the second half, Laois’ prospects looked bleak with a little over 40 minutes played.

They really dug in after that though, working tirelessly and forcing Antrim into mistakes, while picking off scores themselves at the other end.

Paddy Purcell’s goal in the 54th minute was a key moment in the game, giving Laois a three point advantage at the time. They never trailed after that and any time Antrim looked like building up a bit of momentum or getting close, Laois steeled themselves and managed to grind out a score.

It was far from perfect from Laois, but the performance was better and it gives them something to build on ahead of a difficult game against Wexford this weekend.

After they lost at home to Limerick on Sunday it means they will need to beat Laois if they hope to make the league final, so Cheddar Plunkett and his team will have to be ready for something of a backlash in O’Moore Park.

As for this game, Laois had the benefit of the wind at their backs in the first half and they got off to a good start. With Neil Foyle at full-forward and Zane Keenan and Ross King working off him, they were trying to be more direct, and the first score came from that when Ross King pointed from 21 yards out.

Zane Keenan added a free moments later before Neil McManus picked out PJ O’Connell, as he opened Antrim’s account. Paul Shiels then levelled things up with a free but a brace of frees from Keenan quickly put Laois back in front.

Shiels was again the man to reply for Antrim, but Laois had the game’s first real goal chance after that when Tommy Fitzgerald was fouled in the penalty area. Zane Keenan stepped up to his third penalty of the campaign, but again he was denied, as the ball was turned out for a 65. To Keenan’s credit, he duly pointed the 65 to restore Laois’ two point lead.

He then doubled Laois’ advantage with two more points, one of which was from play. Shiels briefly disrupted Laois’ run of scores, but Keenan and Willie Hyland pushed the visitors five ahead.

All was going well at that stage until Enda Rowland’s attempted clearance was blocked down and PJ O’Connell scooped the ball to the net. Laois’ response was impressive, and Cha Dwyer hit two points before half time as Laois lead by three at the break, 0-11 to 1-5.

Facing into the elements in the second half, Laois were going to find thing tough, and that proved to be the case when Paul Shiels hit three points from frees in the opening five minutes of the half to level the game.

Zane Keenan got Laois first score of the half from a free, but Michael Bradley quickly cancelled that out at the other end. Keenan and Shane McNaughton then traded points midway through the half before Paddy Purcell came striding through the Antrim defence and shot low to the bottom corner of the net.

That score sent confidence coursing through the Laois team and they never really looked like being beaten after that.

Antrim did manage to get within two points late on, but Patrick Whelan sent over a lovely point from distance and PJ Scully got the final score of the game as Laois claimed a well-deserved four point victory.