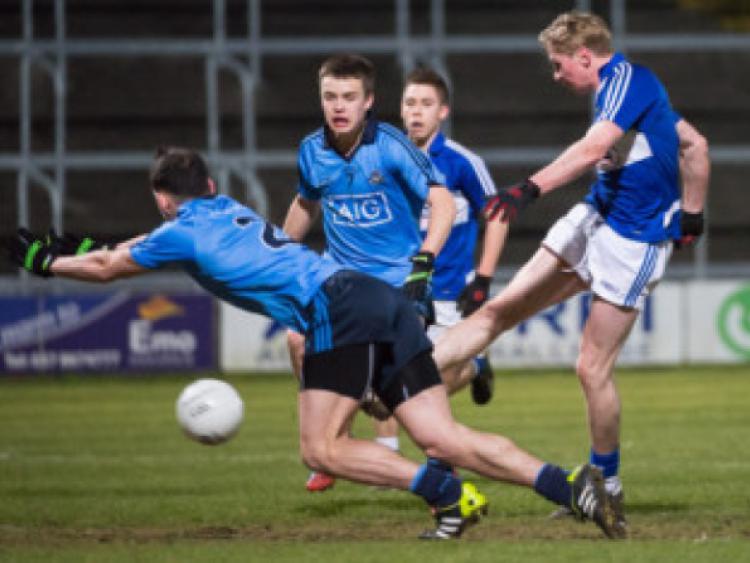 Laois U-21 footballers threatened one of the biggest upsets in recent history last Wednesday night before bowing out of the Leinster Championship to Dublin in O’Moore Park.

Laois U-21 footballers threatened one of the biggest upsets in recent history last Wednesday night before bowing out of the Leinster Championship to Dublin in O’Moore Park.

Five minutes into the second half Derek Conroy’s charges lead red-hot favourites Dublin by a point, with Dessie Farrell and his management team scrambling to stem the rising tide of the home team.

The game eventually swung back in Dublin’s favour, owing as much to some poor wides from Laois as it did to anything Dublin produced.

Having taken the lead for the first time in the game, Laois looked nervous, and a run of three wides in as many minutes seemed to stop them in their tracks. They scored just one more point before the end, while Dublin composed themselves and ran out convincing winners.

In reality, you don’t want to leave a game where Laois are beaten by 11 points and feel there were positives, but that’s the way it was on Wednesday last. It has been a while since any Laois team really rattled a Dublin team (or any top side) to this extent, and while it may have petered out in the end, it was at least nice while it lasted.

While Laois struggled at the back, with the full-back line getting a tough time of it, Evan O’Carroll has turned in back-to-back Man of the Match displays. He kicked three points from midfield, two of his left foot, and his form saw Stephen Cunningham hauled off shortly after half time. He looks like being an important player for Laois for some time to come.

The week before, against Wexford, Laois had been slow to get going and it was the same here. Dublin averaged a point a minute for the opening five minutes to sound out an ominous warning. Laois were struggling to create chances, and they didn’t open their account until the eighth minute, when Evan O’Carroll pointed from the left wing.

Tom Shiel added a free moments later as Laois finally settled, but Dublin hit back in typical fashion. A flowing team move saw the ball worked to Killian O’Gara in the penalty area, and he finished past Adam O’Reilly for the opening goal.

Plenty of teams have wilted after Dublin have scored a goal, but this Laois team were made of sterner stuff. Two minutes later, they picked their way through the Dublin defence and set Alan Farrell up on the edge of the area, and he fired low to the bottom left corner.

Evin Keane and Danny O’Reilly added points as Laois pulled to within four, and with Dublin on the back foot Tom Shiel landed another blow. He cut in from the left wing and curled a shot into the roof of the net to leave one in it.

Dublin reacted well, hitting three points in two minutes to get themselves four ahead, but a peach of a point from Paul Kingston left Laois just three behind at half time, 2-5 to 1-11.

They emerged for the second half like men possessed, and Evan O’Carroll opened the scoring in the first minute from the left wing. Tom Shiel added a free before good work from Kingston saw him level it in the 34th minute.

Evan O’Carroll then gave Laois the lead with an effort from 30 yards as the home fans roared their approval, sensing a famous upset might be on the cards.

Niall Scully quickly levelled the game with a point from a free, but Laois’ hopes of winning dissipated over the next few minutes as they failed to make their superiority county.