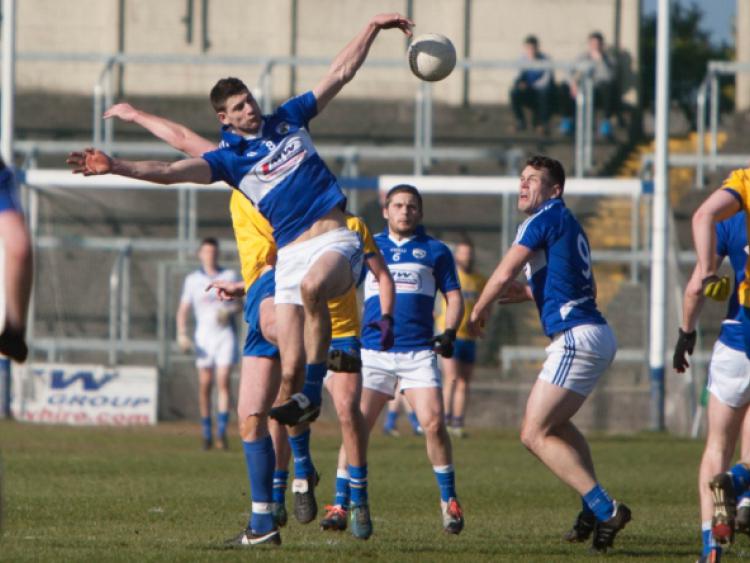 A hugely impressive second-half display guided Laois to a timely first win of the year in what is turning out to be a totally unpredictable Division 2.

A hugely impressive second-half display guided Laois to a timely first win of the year in what is turning out to be a totally unpredictable Division 2.

Laois came into the game in desperate need of a change of fortunes after two defeats and second-half goals from Niall Donoher and Paul Kingston eased Tomás Ó Flatharta’s side to a comfortable and fully deserved win against a previously unbeaten Roscommon side.

Against the wind in the second-half, Laois were disciplined, hard working, tight marking and extremely well organised. Control of the midfield swung decisively in Laois’ favour with Brendan Quigley and John O’Loughlin dominant and that gave the forwards the platform to get the match winning scores.

They had a real cutting edge in attack spearheaded by the hard working Evan O’Carroll and the scores of substitute Paul Kingston, ably assisted by the more experienced Niall Donoher and Donie Kingston. Most importantly, Laois religiously kept their shape with the elements against them which they didn’t on a number of occasions in the opening 35 minutes.

At one point in the first-half, Laois had 15 players deep in their own half while soon after they had 13 in the Roscommon half making it difficult to establish a coherent pattern of play.

The game started very well for Laois as they scored four points inside the opening eight minutes before their opponents had a chance to settle into the game.

As the half progressed, Roscommon came more into the game as Laois’ confidence appeared to wane. Laois still held a two point lead at the break but that advantage evaporated shortly after the restart and with a one point lead and with the elements in their favour, Roscommon looked all set to push on and maintain their unbeaten start to the league. However Laois upped their game when it mattered and, despite the best efforts of Cathal Cregg who was almost single handedly keeping Roscommon in the game, the home side’s standards never dipped in the final 20 minutes as they cruised to a seven point win.

Despite the win however, Laois still remain in the relegation places, just ahead of Kildare on score difference. However on the flip side, Laois are also just two points off second place and if they can back up Sunday’s victory with a win away to Meath next Saturday evening, they will be propelled into the promotion race.

Laois started like a side with a point to prove and had four points on the board inside the opening eight minutes. Captain Ross Munnelly opened the scoring with a point from a free before Darren Strong scored a fine point on the run off his right foot. Conor Boyle added a third point after four minutes before Niall Donoher rounded off the early scoring blitz with a well taken point after eight minutes.

Roscommon gradually fought their way into the game and after a brace from Ciarain Murtagh, Donie Shine pointed a free to reduce the gap to one. After ten minutes without a point, Donie Kingston scored his first point but by the 22nd minute Roscommon were level as the game settled into a more predictable pattern. Laois were dropping very deep but points from Evan O’Carroll and Donie Kingston on the break edged them back in front.

The sides added two points apiece in the closing minutes of the half with O’Carroll drilling over a ‘45 while Ross Munnelly rounded off the scoring for the half with Laois leading 0-9 to 0-7. However given the strength of the wind, it looked a tenuous advantage as they turned around to play against the elements. Roscommon made short work of wiping out the deficit and by the 39th minute they had taken the lead thanks largely to the impressive Cathal Cregg.

At this point Laois needed to stand up and be counted and to a man, they did. John O’Loughlin and Brendan Quigley took over in midfield while the defence tightened up considerably.

At the other end, points from Donie Kingston and a Ross Munnelly free edged Laois back in front before the all action Niall Donoher blasted the ball to the back of the net after being played through by Kingston. Another point from Kingston extended the lead to five.

Roscommon almost hit back with a goal of their own but Graham Brody was quickly off his line to deny Ciarain Murtagh. From the resulting ‘45, Donie Shine thought he had scored but Brendan Quigley caught the ball over the crossbar and Laois cleared their lines.

After an outrageous point off the outside of his right boot from Paul Kingston, Cathal Cregg, who was by far Roscommon’s best player on the day, rattled off three unanswered points to cut the gap to three.

Entering the final five minutes, there was still just four points in the game when Evan O’Carroll got in behind the defence before setting up Paul Kingston for the goal that finally put the game beyond Roscommon.

Donie Kingston and Ultan Harney exchanged late points and as the large Roscommon contingent streamed to the exits, Laois celebrated an impressive win that Tomás Ó Flatharta will hope can kick start his side’s season.

They face a tough trip to Navan next Saturday but confidence will be high on the back of last Sunday’s impressive victory.