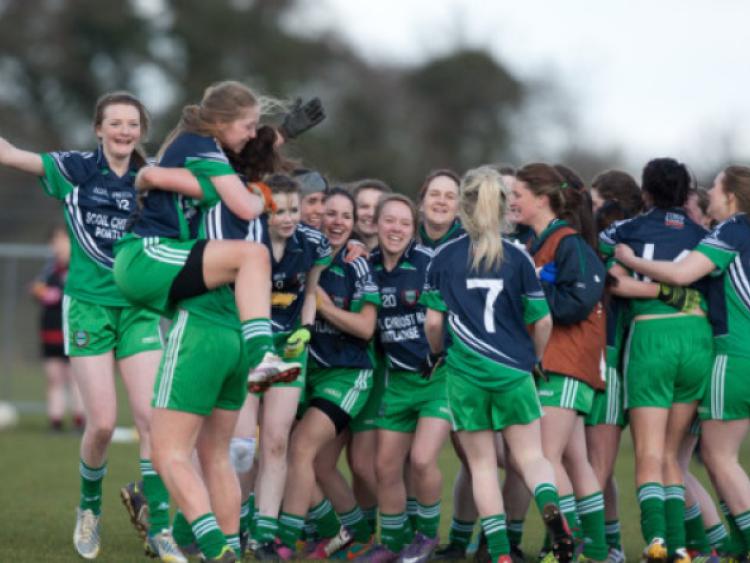 Scoil Chríost Rí from Portlaoise battled their way to All-Ireland glory with a four-point win over Virginia College, Cavan in an enthralling game of football played in front of a passionate crowd in Kinnegad on Saturday afternoon last.

Scoil Chríost Rí from Portlaoise battled their way to All-Ireland glory with a four-point win over Virginia College, Cavan in an enthralling game of football played in front of a passionate crowd in Kinnegad on Saturday afternoon last.

Although they rode their luck on occasions and can thank a superb second half defensive display, there is no doubting that the Laois outfit were the better team over the hour, with a player of the match display from centre half forward Anna Fitzgibbon and a wonderful performance by corner back Kellie Preston among the highlights.

Wind-assisted Chríost Rí got the opening score on two minutes when Anna Fitzgibbon scored a super point. Aisling Bohan soon doubled that advantage from a free and their great start was complete when Fitzgibbon found Orla Carroll with a marvellous pass and the wing forward dispatched the ball to the net with aplomb.

Ashley O’Connell pulled one back for Virginia from a converted free but Bohan cancelled that out, also from a placed ball. However, Chríost Rí were then rocked when they conceded a close-range free and Ashley O’Connell took the free quickly and smashed the ball to the net to the dismay of the Portlaoise girls.

At the other end, when Fitzgibbon was fouled, Bohan converted the free again to leave three points between the sides at 1-4 to 1-1.

The Cavan girls then had a purple patch and, after a couple of poor misses, O’Connell tipped the ball down brilliantly to Beth Farrelly-McGee and the centre half forward kicked expertly over the bar to reduce the deficit. Orla Carroll restored Chríost Rí’s three-point advantage with a fine individual point but, almost on the stroke of half-time, a sideline ball from Orla Carroll was missed by the Virginia defence and Laura Whelan pounced to crash it to the net for an opportunist goal, which left a scoreline at the interval of 2-5 to 1-2 in Portlaoise’s favour.

Within 30 seconds of the restart, Virginia’s Aoife Maguire hit a fine point. Resolute Chríost Rí defending was now called for before Virginia’s Karen McGovern popped up to find the net, but the referee called back the play for a penalty which was duly converted by Ashley O’Connell to leave just two points between the sides.

Virginia should have pushed on at this stage, but they could not raise their game sufficiently and points from Portlaoise’s Aisling Bohan (free) and Laura Whelan (play) put four between the sides, as the game entered the last ten minutes. Beth Farrelly-McGee pulled one back for the Breffni girls and then O’Connell narrowed the gap to two and it looked like it would be a grandstand finish.

However, Chríost Rí were not to be denied, and in the closing minutes Orla Carroll pointed brilliantly after a super run from sub Caoimhe Lawlor, while wing forward Fiona Dooley rounded off match scoring with a wonderful point to rubber stamp Chríost Rí’s dominance. A few minutes later, the final whistle sounded and the title was heading to Portlaoise to the unbridled delight of Chríost Rí’s supporters.