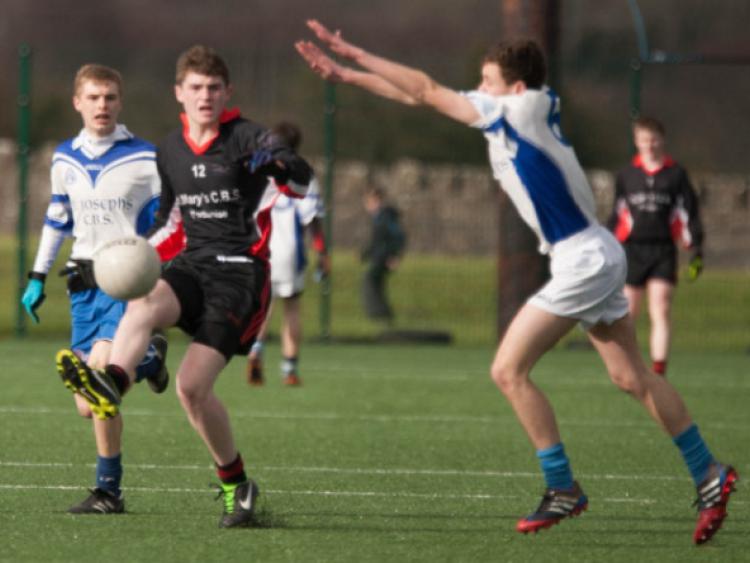 Portlaoise CBS junior footballers had a day to forget last Thursday, as they were thoroughly outclassed by St Joseph’s CBS from Drogheda in the North Leinster final.

Portlaoise CBS junior footballers had a day to forget last Thursday, as they were thoroughly outclassed by St Joseph’s CBS from Drogheda in the North Leinster final.

As the scoreline suggests, the game was never really close. Apart from a bright start to the game by Portlaoise, the Louth school dominated play.

Lead by impressive corner-forward Ross Nally, they had built up a 13 point lead by half time. Despite Portlaoise doing a better job of containing them in the second half, they still finished with a flourish, as wing back Emmet Carolan scored a hat-trick of penalties in the last seven minutes.

The opening minutes had looked promising for Portlaoise, as midfielder and captain James Phelan made an incisive burst up the field from the throw in, and set up John Kavanagh for a close-range point.

St Joseph’s took over five minutes to open their account, with Ross Nally pointing, but they quickly grew in stature after that.

Sean Carroll slotted over a free and Sean Birch also pointed to put them two ahead, before Nally won a long ball into the full-forward line and finished to the bottom corner. Portlaoise were struggling at this point, and they weren’t helped by some parents getting into an argument with the referee, which delayed the game for some time.

It failed to slow down Droghedas a brace of Carroll frees and a 45 from Nally put them eight clear. They had Portlaoise on the ropes, and landed another body-blow moments later. Ross Nally again caused problems, as he forced a save from Joseph Walshe, only for the ball to fall kindly for Sean Birch to slot home.

James Phelan responded with a free for Portlaoise, but further Drogheda scores left 13 in it at half time, 2-9 to 0-2.

All Portlaoise had left to play for was pride, and they did improve somewhat in the second half, as they tightened things up at the back. They conceded just two points in the opening 15 minutes of the second half, but just couldn’t manufacture scores at the other end.

Discipline then failed them late on as they gave away three penalties, and Emmett Carolan expertly dispatched all three, including a Panenka style third, to seal a well-deserved win for the Louth men.