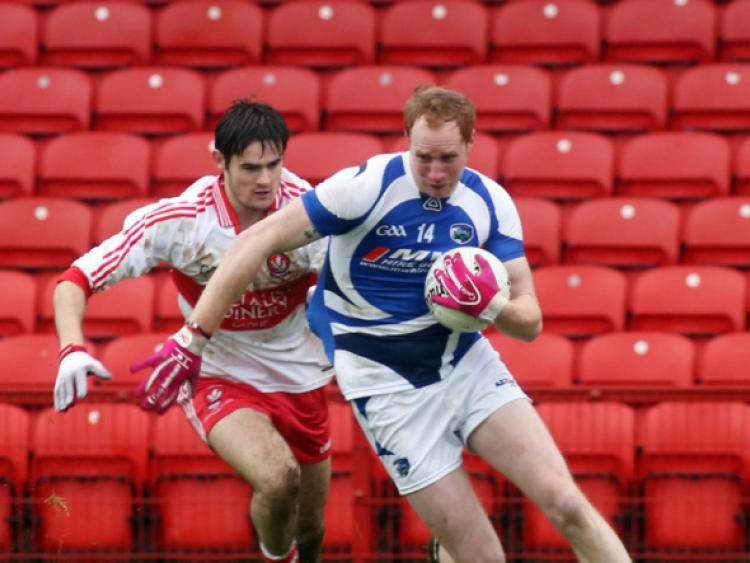 Portlaoise are on the lookout for a new manager after Tommy Conroy stepped down from the position.

Portlaoise are on the lookout for a new manager after Tommy Conroy stepped down from the position.

Conroy was in charge for a second spell as manager of his home club in 2014, guiding them to an eighth Laois SFC title in a row. The club are now in the process of searching for his replacement, as they hope to make an appointment in the next few weeks.

Arles-Kilcruise have raised some eyebrows with their appointment of former Kildare captain, and Longford senior manager, Glen Ryan. Ryan was confirmed before Christmas, and has already held some training sessions with the squad.

Last year’s beaten finalists Arles-Killeen have retained the services of Joe Higgins, while PJ Dempsey will remain in control of St Joseph’s, as does Brian Lonergan with Portarlington. Joe Murphy is also back for a second year with Graiguecullen, with Pat Ryan expected to remain on with Emo and Killian Fitzpatrick and Donncha Phelan likely to continue with Ballyfin after winning the IFC title with them last year.

The Heath have turned to former manager and player Donie Norton, who guided the club to a semi-final in his last stint in charge. He has since been involved with the Laois senior footballers as a selector to Justin McNulty.

There are a number of other new appointments, one of the more interesting in Ballylinan, who have turned to former Laois footballer Gary Kavanagh. It is Kavanagh’s first coaching job outside his home club of Stradbally, where he has been involved with the senior setup in recent years. O’Dempsey’s have appointed former Killeshin boss Mick Moore, who brought the club up to the senior ranks in recent years. Killeshin have replaced him with Mark Brophy, an Athy man who guided Athy to their Kildare SFC title back in 2011.

A couple of clubs have yet to make an appointment. Ballyroan Abbey are believed to be in talks with former Laois senior footballer Padraig Clancy, although no agreement has been reached as of yet.

Mountmellick are also on the lookout after Mick Broder stepped down after last year, while Stradbally are still on the hunt as well.

FInally, Crettyard have also agreed in principle to appoint former player and manager Sammy Kelly. He previously managed the club to a Laois IFC title in 2005, before going on to claim the Leinster title.