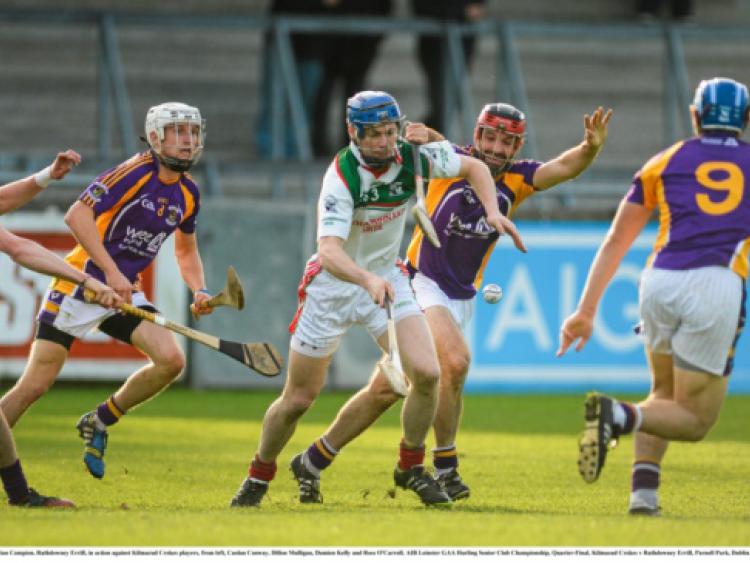 Rathdowney-Errill were denied a place in the semi-finals of the Leinster Club SHC after an epic encounter with Kilmacud Crokes on Sunday, as they lost out by just one point after extra time.

Rathdowney-Errill were denied a place in the semi-finals of the Leinster Club SHC after an epic encounter with Kilmacud Crokes on Sunday, as they lost out by just one point after extra time.

It was a cruel fate which befell them at the final whistle, as exhausted Rathdowney-Errill players slumped to the ground when Paud O’Dwyer eventually brought the game to an end.

Had the game gone to a replay, neither side could have had too much complaints. There wasa some poor officiating and some missed chances on both sides, but neither side really deserved to lose.

For Rathdowney-Errill, their attempts to make the breakthrough at this level go on, and they could hardly have come closer than they did here. They will just have to regroup now and try to get back here next year.

Neither side settled into the game quickly, with four minutes passing before the first score was registered. When it came, it was a simple 21 yard free for Sean McGrath, and the sight of him pointing frees would be a recurring one in the first half.

Rathdowney-Errill didn’t open their account until the eighth minute, with Ross King pointing a free. McGrath responded with another point for Kilmacud, but Rathdowney had their most productive spell of the half after that.

It started with a fine point from Paddy Purcell, as he held off a couple of defenders to point from a tight angle. Ross King added another free a minute later, before he came within inches of a goal.

A ball out to the right wing saw him give Rory O’Carroll the slip, and he raced clear on goal and fired in a shot, only to see it rebound off the crossbar. Two minutes later, John Purcell got a good point from the right wing as Rathdowney-Errill went two point up, but Kilmacud were quickly back on level terms.

Ryan O’Dwyer and McGrath tied the scores, and the middle period of the half saw McGrath and Ross King play out something of a personal duel, with both pointing placed balls to see the scores level at 0-6 each by the 22nd minute.

Kilmacud finished the half strongly, however, as McGrath pointed three frees in four minutes to give them the lead. Again it was Ross King who responded for Rathdowney-Errill, this time from play, but Barry O’Rorke and Sean McGrath (free) saw Kilmacud head to the dressing rooms 0-11 to 0-7 in front.

The second half was much like spells of the first, as Ross King and Sean McGrath traded points, with Rathdowney-Errill struggling to make significant inroads into the Kilmacud lead.

With nine minutes remaining there was still four in it, but then Rathdowney-Errill hit form at the right time.

Agonisingly, they had two late chances to win it, both of which failed to find the target. Ross King was off target with a free and Patrick Purcell also saw his shot miss the target, and so the game went to extra time.

The first period was crucial, with Kilmacud outscoring Rathdowney-Errill by 0-4 to 0-2. They lead by three with two minutes to go, and then Eoin Burke and Ross King (free) left just one in it with time almost up. One last desperate attempt for a score saw Rathdowney-Errill’s final shot at goal come up short, as Kilmacud escaped with the win.