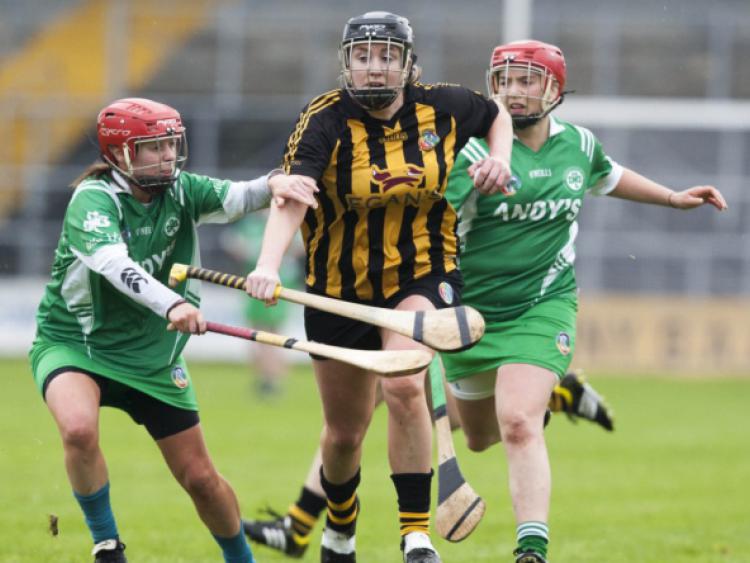 Camross’ dreams of Leinster glory were dashed on Sunday afternoon as two second-half goals from Ballyhale decided the game in their favour.

Camross’ dreams of Leinster glory were dashed on Sunday afternoon as two second-half goals from Ballyhale decided the game in their favour.

It was a disappointing end to a day which promised much early on, as Camross were the more impressive side for much of the first half. Unfortunately for them, however, they didn’t make the dominance count on the scoreboard.

A bad day then got worse for them with a nasty injury to Aoife Burke which resulted in her being stretchered off the field after taking a heavy blow to the head in an accidental collision.

Burke’s plight was the salt in Camross wounds, but with a young panel, they have time to regroup and come back even stronger next year.

Despite the cold conditions, Camross showed no signs of being caught out in the opening stages as they made much the better start of the two teams. They threatened the Ballyhale goals a few times before they were finally rewarded on the scoreboard, with Sarah Anne Fitzgerald pointing a free after five minutes.

Fitzgerald repeated the feat two minutes later as Camross took control of the early exchanges, but their scoring touch, and Fitzgerald’s in particular, would desert them thereafter.

Keeva Fennelly opened Ballyhale’s account with a point from the left wing, while Camross then won, but unfortunately missed, two scoreable frees. At this level you’ll get punished for mistakes like that, and Ballyhale did just that.

Margaret Mary Fennelly raced down the left wing and played an innocuous ball across the goalmouth. Camross had numbers back, but the ball fell kindly for Keeva Fennelly eight yards out, and she lashed the ball to the net to give Ballyhale the lead.

It was a bitter pill to swallow for Camross, who had been dominating the game in terms of possession up to then. It took them a few minutes to settle back down, but when they did Therese Keenan found herself in space on the left side of their attack, and despite the tight angle, she squeezed her shot between the posts for a fine score.

Two more missed frees slowed the Camross momentum after that, however, and again Ballyhale would punish them for that, as they got the final score of the half. Again it was Keeva Fennelly, but this time it was all her own work, as she won possession 45 yards out, sprinted past a couple of Camross defenders before firing over a lovely point from 30 yards.

That gave the Kilkenny women a 1-2 to 0-3 lead at the break, but Camross were kicking themselves for failing to make better use of the chances they created.

On the balance of play from the first half the teams seemed evenly matched, but Ballyhale went through the gears early in the second half. They were getting more possession in the opening minutes, and were eventually rewarded when a long ball from Kelly Anne Cottrell deceived Jennifer Moore in the Camross goal, and slipped into the net.

Camross showed great resolve to strike back for the next score, as Niamh Dollard fired over the bar. The problem for Camross, however, was that they would not score again for 28 minutes.

Ballyhale struck for their second goal soon after, as Cottrell launched a long-range free in the direction of the Camross penalty area, and Margaret Mary Fennelly doubled on the dropping ball to score a wonderful goal.

Camross just couldn’t manufacture a reply at the other end of the field, as they introduced a number of substitutions in a bid to kickstart their comeback. With the Ballyhale defence refusing to buckle, however, Kelly Anne Cottrell’s 45 just edged them further ahead.

As the game slipped into injury time, Camross kept pouring forward, and one such attack lead to their only goal, and to Aoife Burke’s injury. Burke was competing for a ball in the Camross forward line, but slipped and ended up colliding wiht the knee of a Ballyhale defender. Play was allowed continue, and Camross won a 21 yard free, which Sarah Anne Fitzgerald despatched to the net after a lengthy break in play to allow Burke receive treatment.

Unforuntately that score was only a consolation, as Camross went in search of another goal in the dying seconds, but Ballyhale handled everything that was thrown at them to run out deserving five point winners, and add yet another Leinster title to the club’s already well-stocked trophy cabinet.