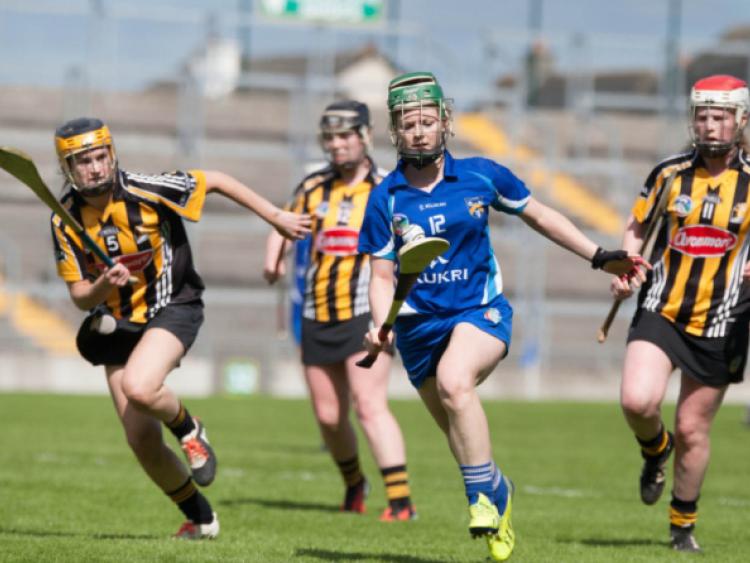 It took extra-time and all their battling qualities but Laois eventually advanced to the Division 2 League Final with a four point win over Kilkenny in O’Connor Park in Tullamore last Sunday.

It took extra-time and all their battling qualities but Laois eventually advanced to the Division 2 League Final with a four point win over Kilkenny in O’Connor Park in Tullamore last Sunday.

Trailing by 0-7 to 0-2 after the opening 30 minutes having played against the wind, Laois restricted Kilkenny to just two points in the remaining 50 minutes as a superb defensive display secured their passage to the decider.

It is just two years since Laois were crowned Division 3 champions and now they have a chance to move up to the top flight when they play in the Division 3 Final on May 3 against Waterford.

In the end it was an opportunist goal from substitute Aoife Burke that sealed the win after 80 hard fought minutes in glorious sunshine. The Camross player pounced to take advantage of a fumble from Ann Marie Lennon, smashing the ball home from close range.

Over the course of the game, Laois were the better team and but for a ten minute period at the end of the first-half, they were in control of the game. Apart from the one spell, Kilkenny were content to play a defensive style dropping large numbers behind the ball.

Ultimately the accurate free taking of Louise Mahony pulled Laois back into contention and in extra-time they were much the fitter side, finishing strongly to seal the win.

While there were strong performances from a number of players, it was the display of the full-back line of Mairead Burke, Rosemary Bermingham and Aisling Burke that was particularly noteworthy. They dominated from start to finish with Kilkenny trying six players at full-forward, none of whom got any change out of the tight marking and dominating Bermingham.

The half-back line of Sarah Creagh, Sarah Anne Fitzgerald and Olga Parkinson also won their individual duels while Elaine Mahony was superb when deployed as an auxiliary defender in extra-time.

The attacking players and midfield had a more difficult day against the massed ranks of the Kilkenny defence but Laura Marie Maher, Louise Mahony, Noreen Kirwan and Michelle Holmes all showed well. Laois only scored two points from play which will have to be improved upon in the final.

David Cuddy will however have been delighted with the performances of his subs who all contributed once they were introduced. Sharon Moylan and Aoife Burke added a much needed urgency to the full-forward line while Eimear Delaney also added an impetus to the attacking play with a brief but impactful cameo in extra-time.

Playing against the very strong wind in the opening 30 minutes, Laois more than held their own with Kilkenny only leading by 0-3 to 0-1 after 20 minutes with Louise Mahony scoring Laois’ point after 12 minutes.

Laois had a few sights of goal but they couldn’t convert any of the half chances that came their way. Kilkenny found their stride late in the half rattling off four points in a row to take a six point lead but a point just before the interval from Michelle Holmes reduced the gap to five.

Points from Louise Mahony and Sarah Anne Fitzgerald soon after the restart reduced the gap further with a point from Sarah Ann Quinlan for Kilkenny soon after being their only score of the second-half.  Kilkenny at times were dropping 14 players back to defend which made life difficult for Laois in attack. However the free-taking of Louise Mahony kept the scoreboard ticking over. Laois were awarded a penalty midway through the half at the end of a brilliant move but Sarah Anne Fitzgerald’s powerful effort was well saved on the Kilkenny line.

While scores were hard to come by, Louise Mahony pointed two frees in the final ten minutes of the half to force the game to extra-time.

Playing against the wind in the first period, Laois continued to dominate defensively and edged in front thanks to yet another Mahony free. Soon after the start of the second period, Kilkenny drew level thanks to a point from Laura Kearns but with the wind behind them, Laois were again dominating the game with their superior fitness also a key factor.

The decisive goal had a slice of luck attached but Aoife Burke was in the right place to hammer home from close range after a fumble from Ann Marie Lennon after 77 minutes. With the game just ticking into injury-time, Eimear Delaney put over the insurance point as Laois emerged with a four point victory.