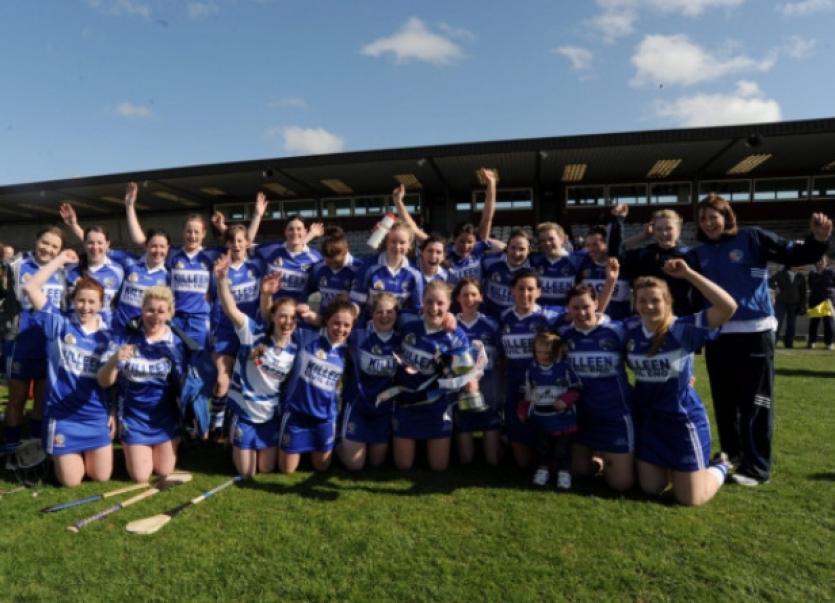 Two outstanding point blank saves from goalkeeper Laura Dunne in the space of a minute were crucial as Laois claimed the Division 3 Camogie League title in Mullingar.

Two outstanding point blank saves from goalkeeper Laura Dunne in the space of a minute were crucial as Laois claimed the Division 3 Camogie League title in Mullingar.

She might not be the biggest ‘keeper in the world however the young St Brigid’s player was a giant between the posts for her side on Saturday and without her timely interventions, there could have been a very different outcome. With the sides locked on 0-7 apiece with ten minutes to go, she first sprinted from her line to deny Roisin Collins and less than a minute later she somehow stopped a close range piledriver from Emma Flanagan.

Laois capitalised on the two stops with Sile Burke and captain Sarah Ann Fitzgerald adding points to seal the win after an very tight hour of camogie. There was nothing to chose between the sides throughout the game despite the strong wind blowing down the field in Cusack Park.

The teams were locked at 0-5 apiece at the break with Dublin having had the benefit of the elements in the opening half. Laois looked to be pulling away early in the second half as they accounted for the first two points but Dublin were quickly back on level terms and they could have jumped ahead had it not been for Dunne’s double save.

Over the hour the defences from both teams were very much on top and Laois captain and centre-back Sarah Ann Fitzgerald was outstanding. Throughout the game she marshalled an excellent Laois defence and she always seemed to be in the right place at the right time to break up Dublin attacks.

Laois’ superiority at the back was highlighted by the fact that Dublin only scored one point from play over the hour with that not coming until the 45th minute. Their midfield partnership of Louise and Elaine Mahony were also very much to the fore with Louise accounting for five of her side’s nine points. The forwards for both sides struggled to make an impact however Sile Burke was the pick of the attacking players on display and she chipped in with two vital points.

Playing with the wind, Dublin opened the scoring with a point from a free from Georgina Kelly but that was quickly cancelled out by Louise Mahony who slotted over a free of her own after two minutes.

Kelly added her second point soon after from another free but Laois were again quickly on terms when Sile Burke scored the first point from play after eight minutes.

Laois went into the lead for the first time 11 minutes into the game when Louise Mahony scooped up a lose ball and slotted it over the bar but parity was soon restored in a nip and tuck first-half when Kelly on target again from a free.

The sides added two points apiece before the break with Georgina Kelly bringing her total for the half to five, all from frees, while Elaine Mahony and Louise Mahony were on target for Laois.

Dublin had the chance to get their noses ahead before the interval but Elaine Gallery twice went for goal from 21 metre fress but both were saved by Laura Dunne.

That left the sides locked at 0-5 apiece at the break with Laois turning around to play with the wind in the second-half. They had the majority of the play after the restart but they struggled for scores having just two points from Louise Mahony to show for their efforts midway through the half.

After going 12 minutes without a score, Dublin hit back with two points in a minute from Emma Flanagan and Kelly to get back on terms.

They should have been ahead soon after but both Roisin Collins and Emma Flanagan were denied by the excellent Laura Dunne.

As it turned out Laois kept Dublin scoreless for the remainder of the game while Sile Burke and Sarah Ann Fitzgerald added late points for Laois to seal the win. Captain Fitzgerald’s point was a spectacular effort from a free from 65 metres on the right hand sideline.