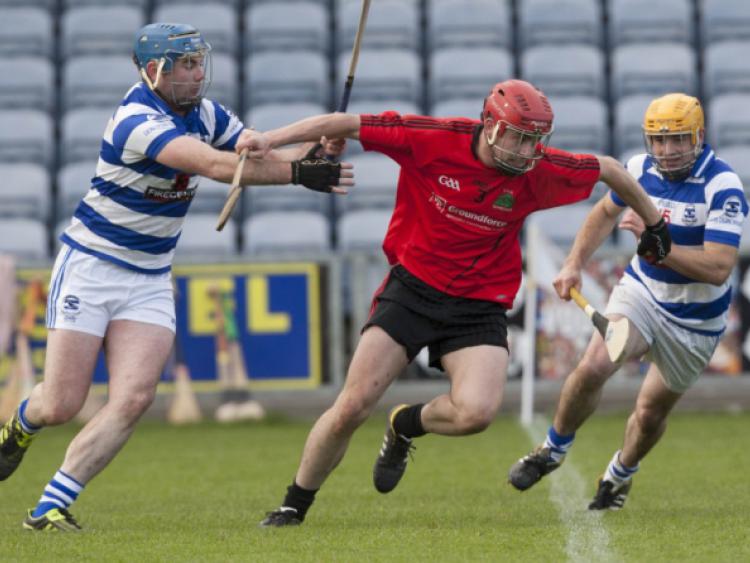 In a season where Shanahoe dominated most of their opponents in the domestic championship, the roles were very much reversed in O’Moore Park on Sunday morning.

In a season where Shanahoe dominated most of their opponents in the domestic championship, the roles were very much reversed in O’Moore Park on Sunday morning.

Kilkenny side Lisdowney were ruthless in their pursuit of victory, and Shanahoe simply had no answer to the Kilkenny champions class and quality. Although Shanahoe did improve in the second half, in truth they were never in the game and can have little complaints in losing out on a 3-26 to 0-14 final scoreline.

Lisdowney centre-forward Eddie Hickey opened the scoring from thirty yards, and Shanahoe responded with a Fint Bowe free in the fifth minute to restore parity in the opening stages. Lisdowney were determined to strike for home really and between the fifth and twelfth minutes hit six unanswered points.

An excellent long range free from Shanahoe’s Leigh Bergin stopped the rot but three further scores by Lisdowney saw the Kilkenny champions lead 0-10 to 0-3 by the twenty minute mark, Shanahoe already resembling a boxer on the ropes.

The scoreboard went from bad to worse for the Laois men a minute later when Lisdowney registered the first of three green flags.

Points from Rory and Eddie Hickey heaped more misery on Shanahoe, the game now already virtually over a contest. Lisdowney were in no mood for mercy however and registered their second goal in the 24th minute.

Eddie Hickey and Paddy Bowden again combined, with Bowden, just like with his first goal, found himself one-on-one with Clooney with the same result. Shanahoe did hit the next two sores, Darragh Cripps and another long distance effort from Leigh Bergin. Lisdowney responded by hitting the final two scores of the first period to see the Kilkenny men go to the break 2-14 to 0-5 to the good.

Shanahoe, to their credit, started the second period the stronger, Leigh Bergin and Darragh Cripps with an excellent side line cut with two early white flags.

Shanahoe hit a hatrick of unanswered scores between the 35th and 50th minute, a brace from the impressive Bergin and a Fint Bowe free proving that playing for pride can be a powerful motivation.

Another long distance free from Bergin in the forty seventh minute saw the scoreboard read 2-18 to 0-11. Shanahoe were beginning to dominate but the Lisdowney men seemed to awake from their second half slumber and re-established their dominance over the next ten minutes.

Four points in a row knocked the final bit of stuffing out of the Shanahoe men, the pick of these a Paddy Bowden solo run and thirty yard flash over. Bowden was on hand to complete his hatrick of goals on the fifty minute mark. A long ball from Lisdowney full back Martin Phelan was pounced on by Bowden who evaded the challenges of the Shanahoe rear-guard before dispatching high to the roof of the net.

Shanahoe were now ghosts chasing Kilkenny shadow’s as the game headed to a finish. Lisdowney sub Michael Kenny finished the scoring with a point, mercifully referee John Keenan played no injury time ending the one sided affair bang on the sixty minute mark.

Shanahoe did regain some pride in the second period but were simply no match for their far superior opponents, but can be plenty pleased achieving their main ambition of securing a place in the SHC ‘B’ for next year.