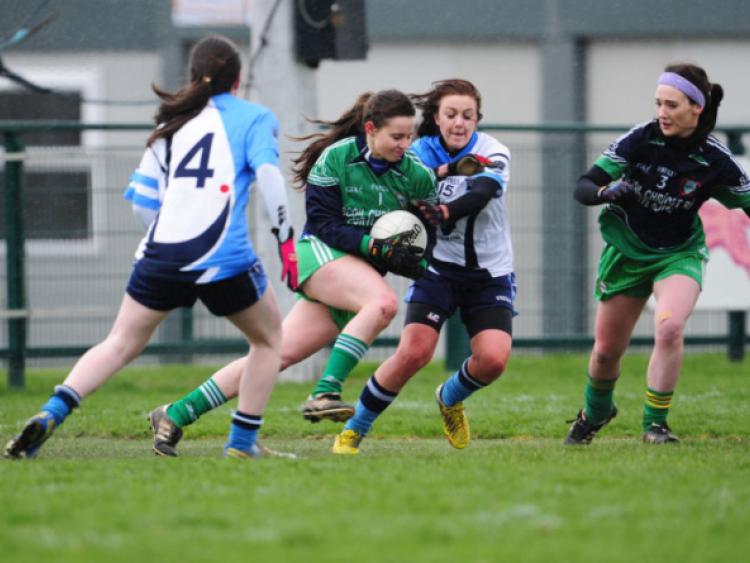 Despite conceding 1-2 late in this All Ireland semi-final against St Ciaran’s from Ballygawley, Scoil Chriost Ri were never in danger of losing the game as they had built an unassailable lead playing excellent football from start to finish.

Despite conceding 1-2 late in this All Ireland semi-final against St Ciaran’s from Ballygawley, Scoil Chriost Ri were never in danger of losing the game as they had built an unassailable lead playing excellent football from start to finish.

A personal total of 1-4 in the first-half from Erone Fitzpatrick put the Laois school into a commanding 1-11 to 0-3 lead and while the Tyrone side launched a mini fightback on the restart, Scoil Chriost Ri showed great composure and goals from Aine Fitzpatrick, Maeve Phelan and Orla Carroll put the game beyond their northern opponents.

They will now face Glenamaddy in the All Ireland Final on Saturday week with a venue yet to be decided after the Galway side overcame Scoil Mhuire Carrick-On-Suir by 3-10 to 4-6 in their close fought semi-final.

Just over a year ago, the Portlaoise school triumphed in the All Ireland C Final against Virginia of Cavan and now they are just one win away from making it back to back national titles.

They opened the scoring on Saturday in Ashbourne with an early point from Fiona Dooley and it was a lead they would not relinquish for the remainder of the game.

After points from Erone and Aine Fitzpatrick, the sisters scored 2-6 between them on the day, Scoil Chriost Ri were hitting their straps but they spurned a number of goal scoring opportunities as they dominated the game.

The goal however eventually came before ten minutes had elapsed when an incisive passing move opened up the St Ciaran’s defence and Erone Fitzpatrick applied the finish to leave the Laois school leading by 1-4 to 0-0.

The Tyrone school gradually clawed their way back into the game and managed to score three points. They could easily have had more but for three saves from Fiona Kelly while another rasping shot cannoned away to safety off the crossbar.

At the other end Scoil Chriost Ri were relentless with Caoimhe Lalor kicking four points and Erone Fitzpatrick adding another three to her total to leave their side 1-11 to 0-3 to the good at the break having played with the wind.

Whatever was said in the dressing room, St Ciaran’s came out with a renewed sense of purpose in the second-half and quickly set about closing the gap with points from Briege Mullin, Emma Quinn and Melissa McCann and a well taken goal from Alica McGuigan.

That left the gap at just four and the momentum was with the Tyrone side and with both teams reduced to 14 players due to sin-binnings, the game was wide open.

However the crucial score came soon after and it came in favour of Scoil Chriost Ri. After her first shot was blocked, Orla Carrol regathered possession in front of goal and made no mistake with a rasping finish to the roof of the net.

That visibly settled the Portlaoise side and while St Ciaran’s hit back with two points, Anna Fitzgibbon put six between the sides again entering the last ten minutes.

Soon after the game was put beyond St Ciaran’s when Aine Fitzpatrick found the back of the net after being put through by Anna Fitzgibbon. Fitzgibbon was the provider again for the fourth goal with Maeve Phelan this time applying the finish as Scoil Chriost Ri finished the game in style.

Ballygawley continued to battle to the end and a goal from Grainne Rafferty and two late points to reduce the gap to seven but it was too little too late as Scoil Chriost Ri advanced to a second consecutive All Ireland Final.