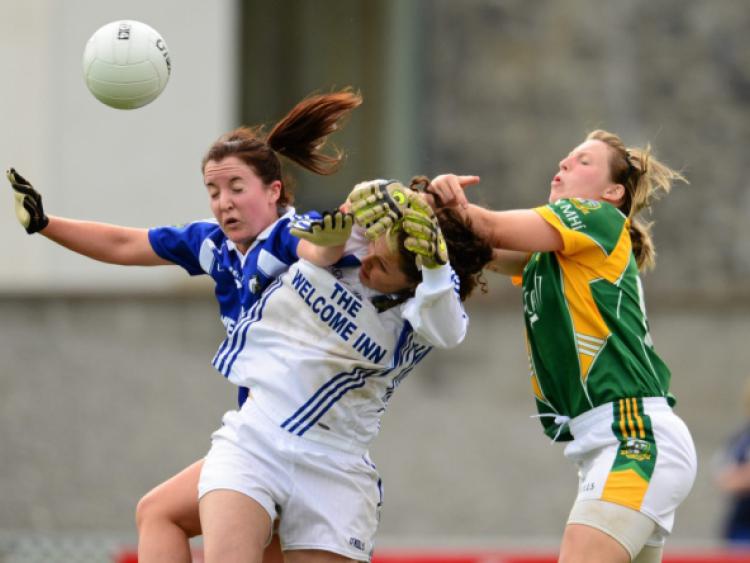 The Laois Ladies Footballers got their season back on track in emphatic fashion with an impressive ten point win over Meath to book their place in the All Ireland quarter-final.

The Laois Ladies Footballers got their season back on track in emphatic fashion with an impressive ten point win over Meath to book their place in the All Ireland quarter-final.

A first-half goal from Ciara Burke, who captained the minors to All Ireland success the previous Monday, along with three points from the deadly accurate Tracey Lawlor guided Laois to victory over a side who had previously beaten them twice this year.

By half-time Laois were 1-9 to 0-2 ahead and they kept Meath at arms length throughout the second-half to secure their place in the last eight where they will face Ulster champions Monaghan.

Meath had beaten Laois in the Leinster semi-final but in St Brendan’s Park in Birr last Saturday there was never likely to be a repeat of that result as Laois stormed out of the blocks and never let their opponents get into their stride.

Geraldine Doherty opened the scoring for Meath but from there it was all Laois as scored the next five points while keeping the Royal County scoreless for the next 20 minutes.

Martha Kirwan opened Laois’ account and the scores kept coming with Tracey Lawlor leading the way. Meath eventually added their second point with 22 minutes on the clock but Laois responded in emphatic fashion with a goal from Ciara Burke to put seven points between the sides.

Laois continued to add points before the break with Tracey Lawlor finishing the half with four, Maggie Murphy two , while Grainne Dunne, Martha Kirwan and Martina Dunne scoring one each.

Meath started the second-half strongly with substitute Joanna Byrne scoring two points as they reduced the deficit to 1-10 to 0-4.

Meath continued to close the gap but Alison Taylor steadied Laois nerves midway through the half with a point to keep the lead at eight. Soon after Meath almost got a goal that would have gotten them right back in contention after Noirin Kirwan was sin-binned but Emma Troy’s shot rattled the crossbar.

Meath were also reduced to 14 players for ten minutes when Aedin Murray fouled Tracey Lawlor with 52 minutes on the clock. Laois had a chance to wrap up the game from the resulting penalty spot but Mo Nerney’s effort was saved however Maggie Murphy slotted the rebound over the bar.

From there Laois easily closed out the game and now turn their attention to the All Ireland quarter-final against Monaghan next Saturday at 6pm in Cavan.