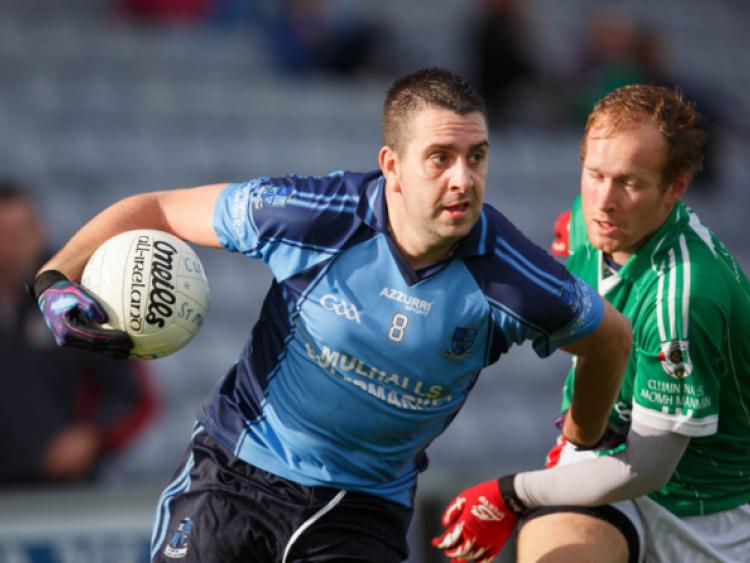 Ballyroan Abbey made sure it was third time lucky for them in the Laois IFC final as they battled to a six point win over Clonaslee on Sunday afternoon.

Ballyroan Abbey made sure it was third time lucky for them in the Laois IFC final as they battled to a six point win over Clonaslee on Sunday afternoon.

Having tasted defeat in each of the last two finals, they were under pressure to finally secure a return to the top tier in the county. It wasn’t easy for them here, as atrocious weather and a dogged Clonaslee side made sure they worked hard for the win, but they fully deserved it in the end.

With Scott Conroy and MJ Tierney doing most of the scoring, and Martin Scully a constant thorn in Clonaslee’s side, they just had too much for the men in green. Padraig McMahon was as busy as ever at midfield and their defence held Clonaslee to just six scores over the hour.

For their part, Clonaslee could have few complaints at the final whistle. They just never got going on the day, with the passing and handling not up the pace of a county final. Once Ballyroan Abbey got their goal in the first half it meant Clonaslee were always playing catch-up, and they were struggling too much for scores to pose a strong enough threat.

They were always lurking in the background though, and had a couple of goal chances in the second half which could have radically altered the course of the game. Gary Scully kept them at bay with one point-blank save, and that was as close as Clonaslee would get.

Ballyroan had wind advantage in the first half, but the pressure of finally winning an IFC final looked to be affecting them as Clonaslee had the better of the first ten minutes. Scott Conroy had given Ballyroan Abbey the lead in the third minute with a point from 35 yards, but Glen McEvoy quickly responded for Clonaslee with a free, after he was fouled.

Will Young was then fouled after a storming run from midfield, and McEvoy was on hand to float over his second free in three minutes.

Five minutes would elapse before another score was registered, and it would prove to be an equaliser as MJ Tierney floated over a 45. That would be as close as the teams would be to each other for the rest of the game, as Ballyroan Abbey upped their game after that.

They took the lead with a pointed free from Scott Conroy, before Jamie Whelan saw his soccer-style shot fly just wide. They wouldn’t have to wait much longer for a goal, however, as MJ Tierney struck just over a minute later. James Keegan won possession on the right wing, and played in MJ Tierney, who beat Conor Gorman at his near post for a crucial score.

That really lifted Ballyroan Abbey, and they kept pouring forward from there, with Jamie Whelan adding a fine score from 30 yards less than a minute later.

Clonalsee were finding it hard to string a decent attack together, and Ballyroan Abbey were having the opposite problem at the other end as they scored a wonderful point. Padraig McMahon played a ball down the left wing, and a deft flick from Martin Scully set up Scott Conroy for a point from a tight angle.

Will Young hit back for Clonaslee with a point from long range, and both teams managed another score apiece before Brendan McCann blew the half time whistle.

Both teams had been back on the field for a matter of secods when the heavens opened and a torrential rain shower left the conditions treacherous for the second 30 minutes.

Ballyroan Abbey picked up where they left off at the start of the second half, with MJ Tierney pointing a free in the second minute.

Scott Conroy added another from a free two minutes later as Ballyroan went seven clear, and it all looked bleak for Clonaslee at that stage.

Ger Dunne almost threw them a life line when he raced through in the 37th minute and got his shot away, but Gary Scully swatted the ball away and Ballyroan survived.

They almost put the game beyond doubt moments later when corner-back Niall Wallace found himself in space in the penalty area, and his deft lob over Conor Gorman hit the crossbar and bounced to safety.

It wasn’t until midway through the half that Clonaslee finally troubled an umpire, as Glen McEvoy (free) and John Rigney pointed to get them withinfive. Clonaslee really needed a goal now to make a game of the closing stages, but there would be just one more score, and it went to Ballyroan Abbey.

MJ Tierney drilled over a 45 with nine minutes remaining, and Ballyroan Abbey withstood all the late attempts Clonaslee St Manman’s had for goals and they ran out deserving six point winners in the end to claim a long overdue success..