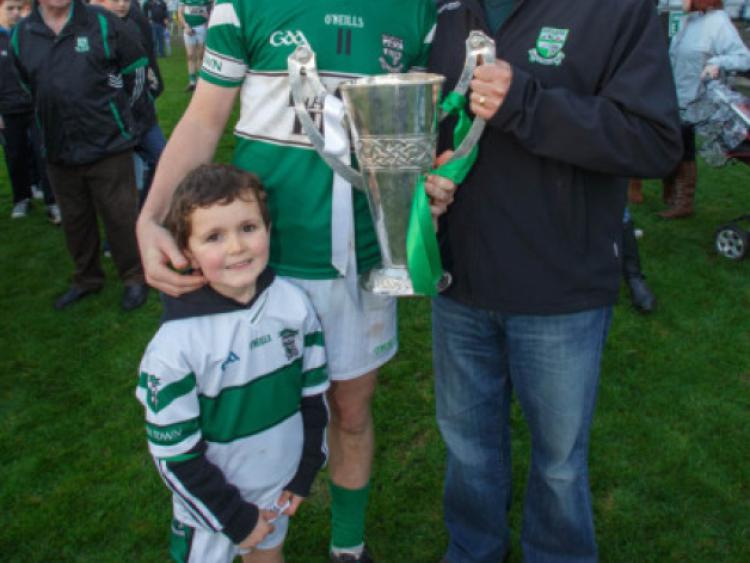 Portlaoise captain Brian ‘Bruno’ McCormack was a very happy man as he lifted the Jack Delaney Cup after his side’s historic seventh senior championship win in a row last Sunday.

Portlaoise captain Brian ‘Bruno’ McCormack was a very happy man as he lifted the Jack Delaney Cup after his side’s historic seventh senior championship win in a row last Sunday.

It was the captain’s tenth time to be part of a senior football championship winning team. Speaking after the game he remarked on how tough a battle it was and how the goal from Kevin Fitzpatrick, another ten times championship winner, turned the game in Portlaoise’s favour.

“They really put it up to us there today. We really struggled for long periods of the game. We were ahead and then they got the goal just when we thought we were getting on top. At half-time we kept calm. We knew if we got a few points and got them close. Then Fitzy came in and fisted the ball to the back of the net. That changed the game for us. That gave us a foothold. From then on we were a point up. We kept plugging away. We got a few scores and once we got it to two or three points, I thought we were safe then.”

Portlaoise had struggled to come to terms with the attacking threat of Paul Kingston but after the break they got to grips with the young full-forward and eventually got a grip on the game. Bruno paid tribute to Paul Cotter who came on at half-time having just returned from injury.

“Cotts has been playing very well for us back there all year. He was unlucky when he got a freak eye injury and he couldn’t play for the last month. He got the all clear on Tuesday and he’s in great shape for a lad that’s done his cruciate three times. To keep in such good shape and when he went in there he really got on top for us. That was able to get Chair back out the field. Everyone knows how much of a good footballer Cahir Healy is when he’s out playing around centre-back.”

Portlaoise also got to grips with Donie Kingston which Bruno also thought was one of the keys to victory.

“Donie is such a big man. He caused us a lot of problems in the first-half. In the second-half we got around him a lot more. When Conor Boyle went on him, he did very well on him on kick-outs. Once we stopped the ball going in quick, we got on top there.”

The Portlaoise captain didn’t think he had one of his better days but he did kick two crucial long range points from frees.

“It wasn’t one of my better days on the ball. The wind was with me and I’ve been kicking the ball pretty well all year so thank God they went over at the time.”

Going into the game the Portlaoise panel had 128 senior football championship medals between them and that experience was crucial when the pressure was on.

“A few of us are around a long time and when you can bring on the likes of Fitzy (Kevin Fitzpatrick) and Adrian Kelly and Paul Cotter and Zach (Touhey),” commented Bruno. “Zach came on and it was such a big lift for the whole team. You could feel the buzz especially with the supporters getting involved as well. He made a huge addition when he came in as well.”

Portlaoise now go onto another Leinster Championship campaign hoping to go one better than they did last year. The captain is looking forward to having another crack at provincial glory.

“We can only play one game at a time. Let’s hope we get one better than last year. We’re on the road for the first one. We have a three week break. It’s only the U-21 that interferes with our training now so if we have everybody for three weeks, it will be good. I don’t think we got too many injuries from the game.”